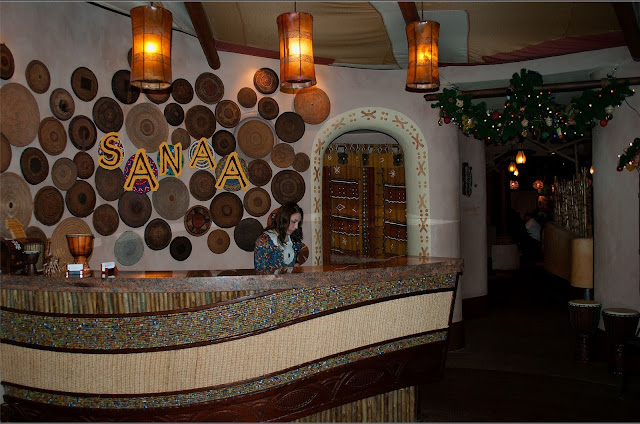 Its always exciting when booking your ADRs to be adding established destinations you have never visited for various reasons or in the case of Sanaa, a totally new establishment.  Sanaa actually opened May 1st 09 in Kidani Village, a DVC property that's part of the Animal Kingdom Lodge compound but for some reason we missed it last time probably as the Wave seemed to be being pushed more as the new restaurant of the year. Using the Disney Transportation System it should be a reasonably easy place to get to. Technically a bus to any park will do then change for AK Lodge. Its quicker to go straight to AK itself though as the Lodge is only a few minutes away and the bus will stop at Kidani Village first anyway.

I say should because I'm not sure whats going on this year but so far the buses seem to have been rather poor compared to previous trips; sporadic, infrequent and in typical British style you wait for what seems an age in freezing conditions only for three to turn up at once. However once we arrive at Kidani Village the restaurant is easy to find and we are checked in and given the usual vibrating buzzer. You can walk out from the restaurant's lobby to a large outdoor grazing area where thougthfully a large fire is roaring and African CMs are on hand to point out the various animals on the plains. 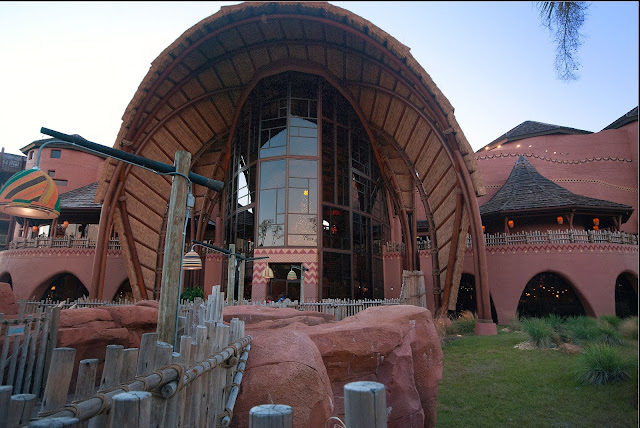 It's not too long before something's buzzing in my pocket and our hostess is taking us to our table. I like Sanaa straight away, the lighting is atmospheric and well designed and the whole place is just beautiful. Chris our server goes carefully and in great detail through all the menu choices which is a fusion of Indian and African cuisine with more emphasis towards the Indian side. To be fair coming from a country where Indian cuisine is almost the national dish it's all quite amusing, but Chris delivers his knowledge with real enthusiasm.

A selection of breads and pickles are selected to accompany the meal and poppadoms to start; though oddly the breads are listed as a starter which seems a little strange to me. At home Indian cuisine in our town is in general dominated by a couple of established restaurants and countless others who specialize in takeaway only. My simple rule with an Indian restaurant is consistency and it's here I find they always let themselves down. Good one week, the same dish can be poor the following week as if the chefs making it up as he goes along. One other key element is the quality of the Nan breads out of the tandoor. Beautiful thin and light one week, a lump of dough the next. 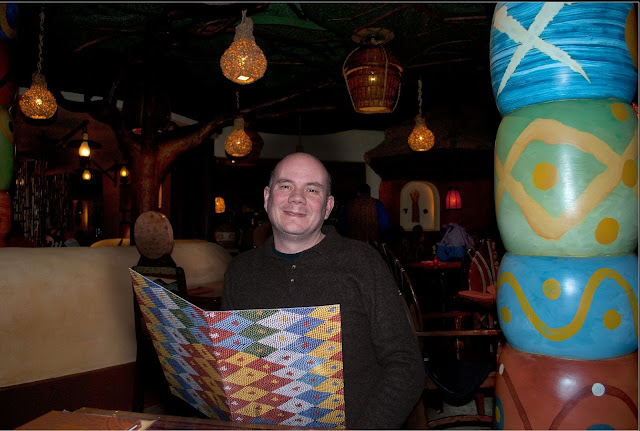 At Sanaa the breads arrive and we are transported to Nan bread heaven. Light and thin with just the right balance between the crisp outside and fluffy interior. The Paratha is also a joy though I would have preferred the Paneer cheese to be more "lumpy" rather than blended into the fried paratha bread as the whole point of Paneer is the cheese can stand the cooking process without melting. Poppadoms which are probably the same the world over are fine but here its the pickles that are the revelation. I will never now be able to have mango chutney from a Pataks or Sharwoods jar again without thinking of the utter delight that was served to us in Sanaa. Beautiful soft fresh mangoes diced with a subtle spice mixture and a good amount of freshly chopped chili for heat has now spoilt us for life.

Sanaa has quite a good menu system in which you choose either Tandoor dishes or assemble a selection of curries. On top of that there are fish dishes in spiced broths. I decided to try the curries and selected two from the choices that had very different styles. On the left we have a more Thai than Indian or African influenced Shrimp dish in a green curry sauce; well spiced with a good amount of heat, very fresh in the mouth with coconut, coriander and chili being the prominent flavours. The Beef dish on the right was more unusual and probably not something I would choose again. The beef was cooked beautifully, real slow pot stuff that melted away in the mouth but the sauce was a little on the sweet side for me. Fluffy Basmati rice, Tusker Beer and Mango Lassi completed the whole dish. 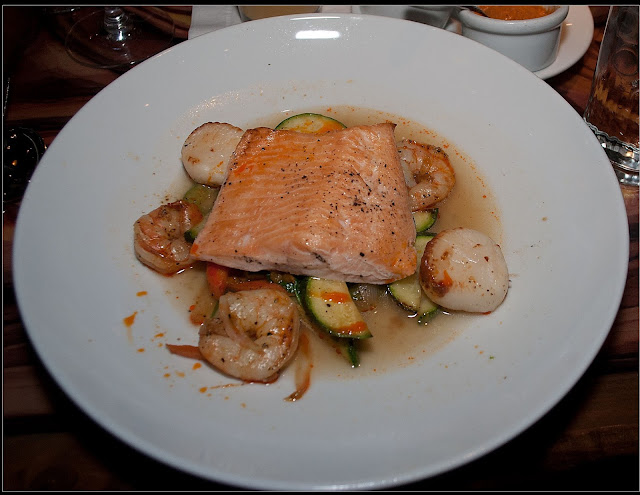 Jackie chose what is described on the menu rather simply as "Todays Sustainable Fish". To be honest Chris described this so well I almost had it myself. It consisted of piece of Arctic Char imported from Iceland, a salmon like fish that tastes very like sea trout and will probably be the big new sustainable hit of the next few years. This is served with scallops and shrimps in a lightly spiced curry broth with vegetables. The broth is described as a blend of white wine, fish stock, citrus with light thai curry spices. Its absolutely divine, has just the right amount of kick so as to give slight heat but not overpower either the fish or the scallops and shrimp and was the star dish of the night. Casa Grand Pinot Grigio washed it down for Jackie with a Mango Lassi on hand for cooling purposes.


All in all this was one of our favourite meals of the week. Great atmosphere, superb food and such a wonderful setting. Can't wait to return.
Email ThisBlogThis!Share to TwitterShare to FacebookShare to Pinterest