A quick break in Florida - Part 1


The nights are getting darker, grey and colder. So last week we took a break in the world of  Disney and Universal Studios Florida. We have always been fans - holidays lying around a pool or on a beach no longer call our name - we have to be doing something which is probably why we have recently turned to cruising. 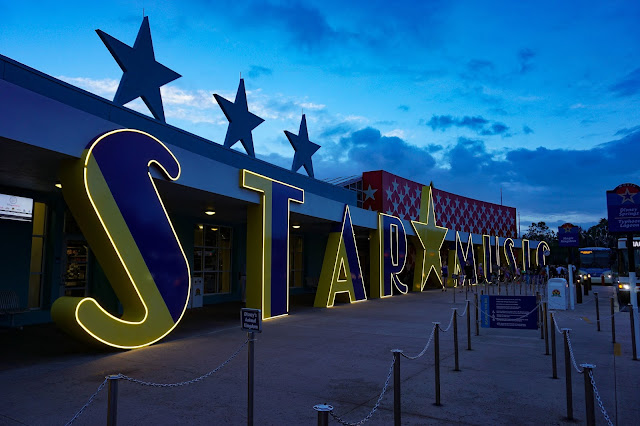 Its been a couple of years now since the last trip out here - our last visit to a Disney park was actually in California last year - we couldn't resist adding it on to the end of our Amtrak Sleeper Train Trip which you can read about here.


Sometimes its actually good to leave a little gap in your visits (if you can just resist)  so you can allow time for new attractions to be completed (and quieten down a little) such as the expansion of Animal Kingdom. It's also why this time we have also decided to visit Universal to see London, Hogwarts and Hogsmeade (whilst these have indeed been open a few years now, this year is the first time as an on site hotel guest you can use "Front of the Line" privileges which can make a huge difference in the land of Harry Potter and Universal in general)


We flew out from Manchester by Virgin Atlantic via Atlanta where a 2 hour layover was not quite enough to pass through Atlanta's disastrous international immigration setup. Speaking to the agents the problem seems to be that they have now installed a multitude of electronic screening booths but have cut down on the front of line staff at the same time - cancelling out any advantage the automated system should be giving. We were put on Standby for the next available flight and after a great pizza find ourselves on the short 1 hour hop down to Orlando. Fortunately the flight back is direct.

Our luggage is here waiting for us at MCO as soon as we disembark. It curiously was sent down on the flight we missed which I thought was not suppose to happen anymore - but it saves us time hanging around the carousel and soon we are on the Magical Express and checking in to All Star Music where we are given our Mickey Bands  (no wallet or door keys needed now for a week). Tomorrow its off to Pandora in AK to see just what they have been up too and if it lives up to the hype.


Animal Kingdom this morning has an official opening time of 8.00am (with no Early Entry for guests today) - Hotel to AK is a short 10 minute hop on the Disney Transport Buses and we are here by 7.15am  having noted that since Pandora opened they have been opening the park 30 minutes early and lining people up to enter the new land. Right on schedule at 7.30am we are allowed to pass through the now busy gates (behind us lines were reaching back to the ticket booths) and find ourselves at the rope drop for Pandora, as we have no Fast Pass for Flight of Passage. 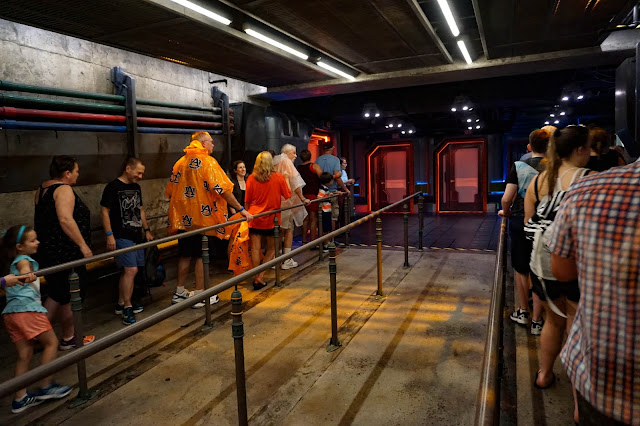 I cant say I was a fan of James Cameron's 'Avatar' film - I wish he would just direct and let someone else do the writing. I can however see now how the land fits into the eco theming of Animal Kingdom very well. And as for Avatar Flight of Passage-- I have  to say it's the best thing I have ever ridden using this type of technology. Beautiful bright Images - superb immersiveness with thrilling moments balanced beautifully with seconds of rest and peace as you feel the Banshee's body breathing and catching its breath back against your legs. PS. If you want to see Cameron's hand print you need to ride the 2nd level set - its by the ride rooms exit to your right. We rode it twice more on fast passes over the week. If you haven't managed to get these on your 60 days out window then you will have to get up early or be prepared to stand in line for over 3 hours. We were up at 5.30am! 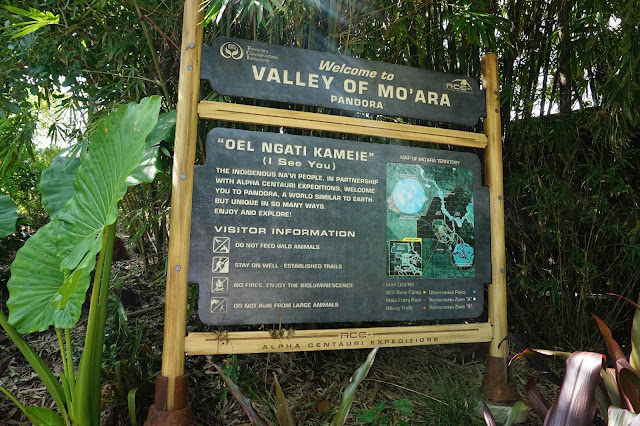 Pandora itself is a beautiful if quite small land - it fits perfectly into AKs lush tropical greenery yet is different enough from the more natural jungles to make it quite unique - helped by the superb sounds and effects flowing from the jungles.


At night though it's truly worth another visit (after you have done the new lake show) when the paths and vegetation glow in a blue light symphony of colours. 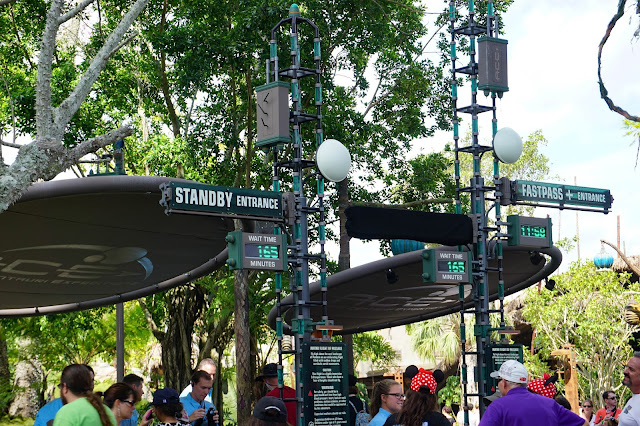 On exiting the line has now extended all the way back to Africa & back to Pandora. We have a fastpass for the 'Na'vi river ride' (Pandora's only other ride at the moment)  after lunch so we now move on to the rest of the park. I think last time we were here they had already moved the Lion King show to its new home but now the new back water walk that links Africa to Pandora has been  themed and looks superb as well as being very handy.

Next its on to a relaxing and  bouncy trip through the Savannah on safari. Always a favourite - a couple of new locations seem to have been added included an African wild dog section - though this is rather badly placed for anybody sat on the right hand side of the bus - strange creatures - ugly and evil looking at the same time. 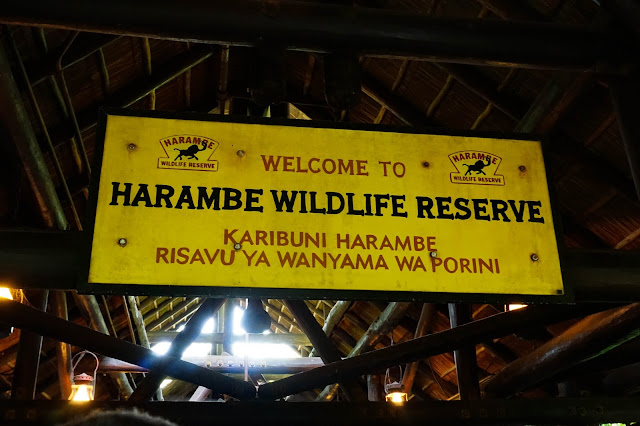 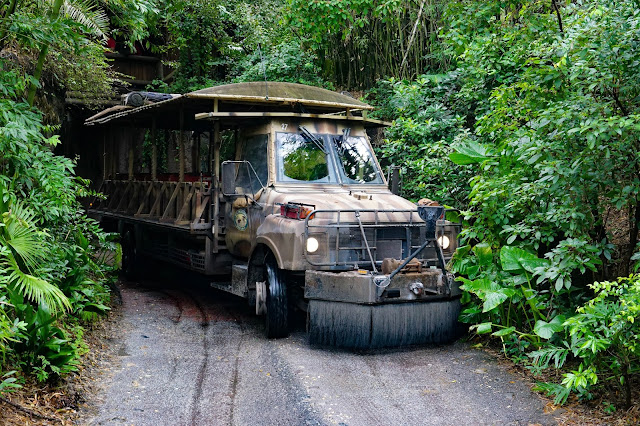 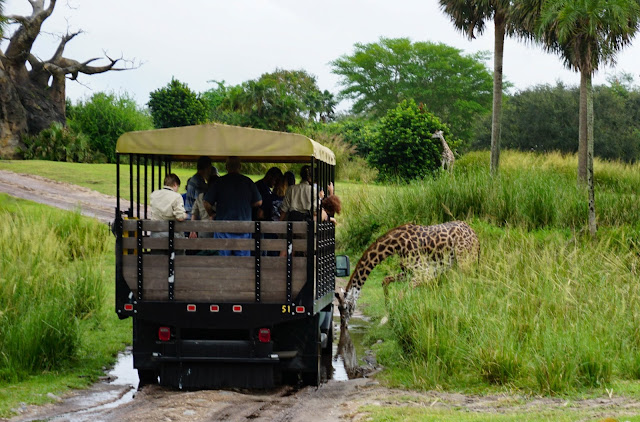 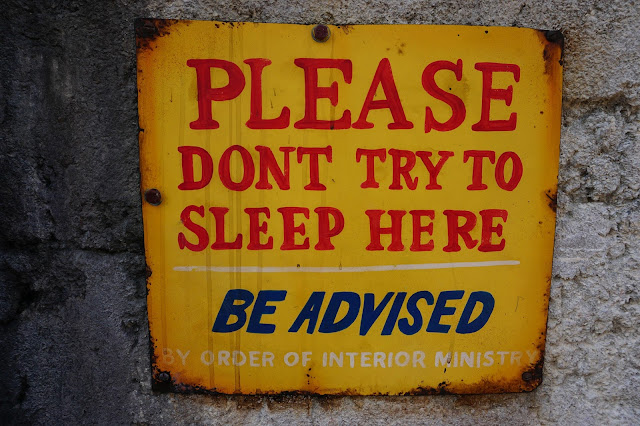 We are spending the full day in AK today,  now a great and viable option made  possible thanks to the new night show. The side effect of Pandora is that most other rides/shows hardly generate much of a line. For lunch - after riding the highly comfortable and smooth (not) Dinosaur USA (other wise known as the spine smash jeep) we hit an old favourite: Restaurantosaurus for juicy burgers, fries and beer - mmmmmm Safari Amber Ale. 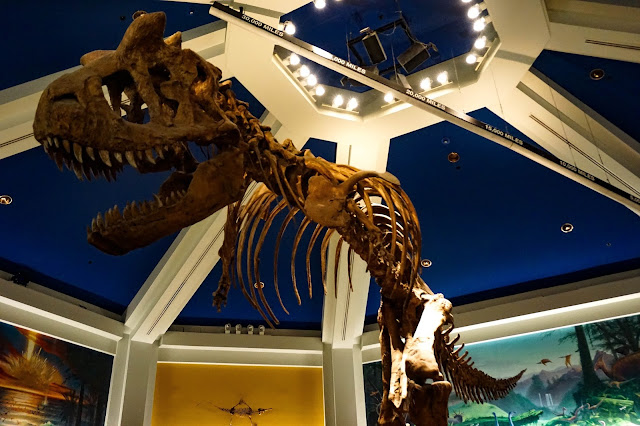 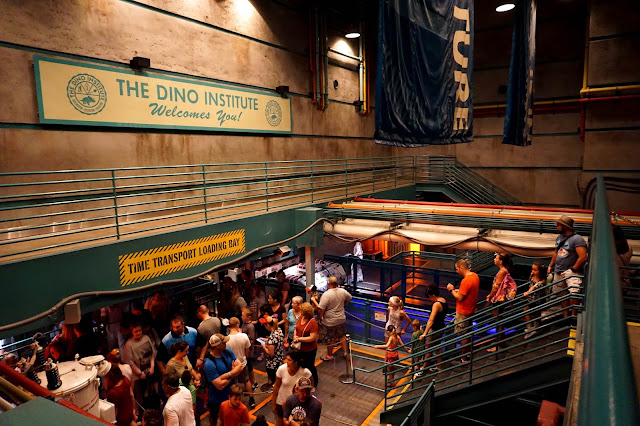 A short walk from here brings us to the Nemo show, I do love the show with its wonderful staging and puppetry; however, we find the songs rather weak but this is more than made up for by the fantastic performers.

We pass the rest of the time riding old favourites - Everest is still a must do (multiple times) and we have a FP already booked for this. The new Disney App seems to be working much better than it did last time we used it (in its first cpl of weeks) though personally I find the new Fast Pass system is really restrictive. Single rider still works well though (I note that they seem to have permanently attached a 45 minute wait time to the wall by the single rider queue on Everest - even with the SR line quite full it was never no more than 15 mins in reality) 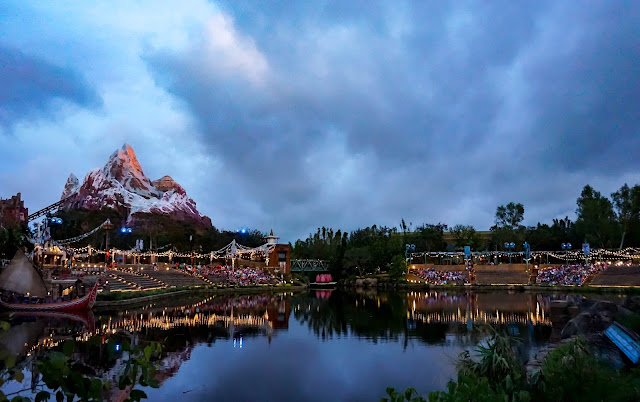 And lets not forget 'Its a Bugs Life' . Its still funny and more importantly - great air con, a quick shower plus you get to sit down and have a free body massage (win win in this heat). Remember, magnifying glasses are for looking at little things, not for burning little things. 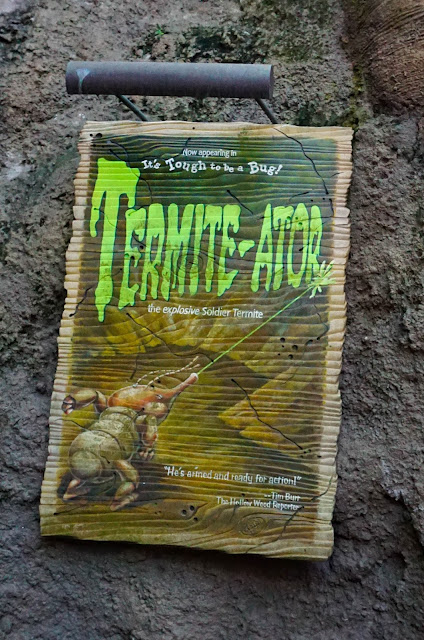 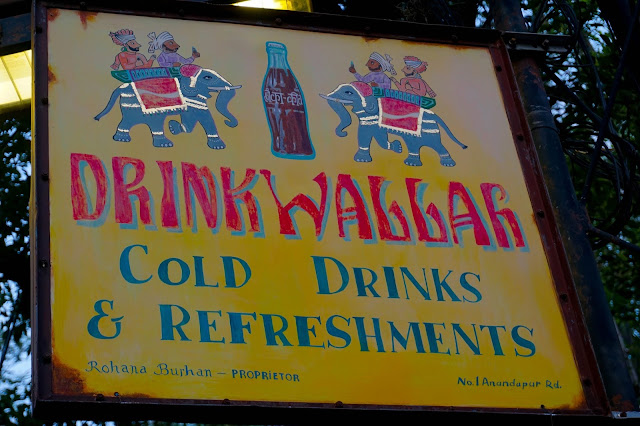 One show we always enjoy - even though we know the script practically by heart now is Flights of Wonder. Its always good to get some time sitting down to rest your feet whilst still being entertained and this show is one of our absolute favourites - and quite thrilling when they choose somebody one row behind you for the dollar joke - just make sure you turn your camera shutter speed right up.


Just a little time to kill before dinner at the Yak and Yeti tonight so we head off on the Harambe Express for a round trip (We dont actually get off  - just pass the time swaying about on the train and resting our feet again). When we arrive back we take in the jungle walks -  Gorilla Falls exploration Trail; The Gorillas seem to be in a bad mood with arms folded & backs to us! Hilarious & Maharajah Jungle Trek for the tigers. 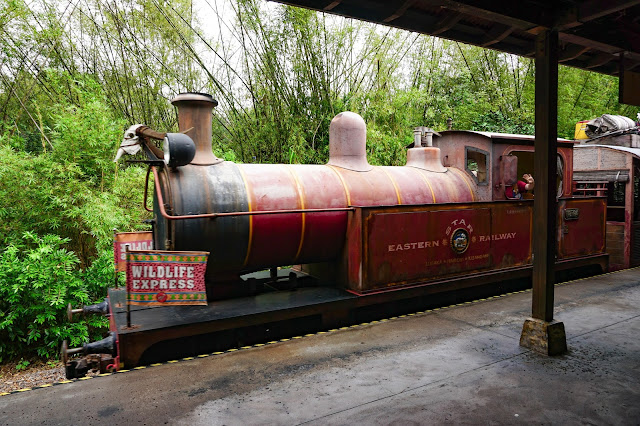 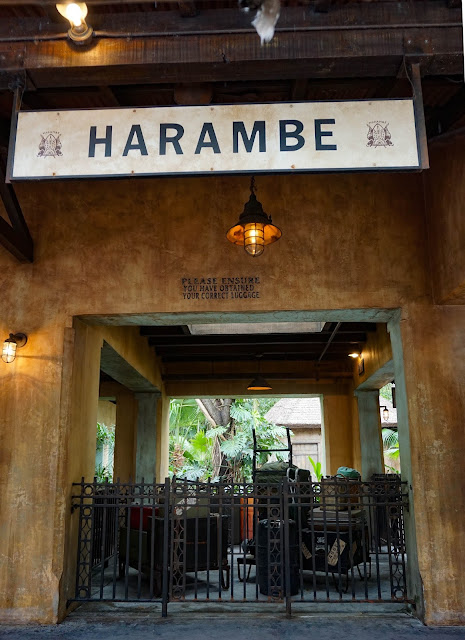 Then its a stroll back into Asia for dinner at the Yak and Yeti. After a shared starter of tuna and crab Dragon Rolls ( bit short on tuna incidentally) I opted for the lobster with scallops on noodles and Jack chose the halibut; both delicious and our server placed everything family style with extra plates so we could share it all.  Ooooh and more great wine and beer. 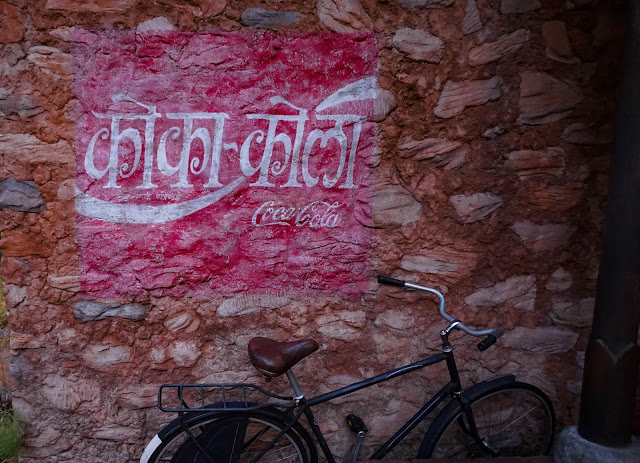 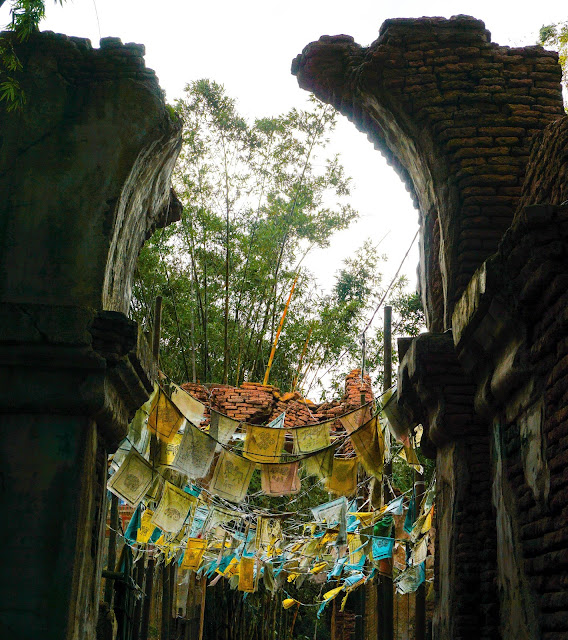 We had a little time to pass before the night show so after a dusk walk along the Tiger Trail we watch some of the street entertainment around the Africa Hub. I must mention a highlight is the myriad of live entertainment doing their thing. We were both mightily impressed especially with these guys who had everyone dancing in the streets by the end of the show, the drummers in Pandora are awesome too, especially as we went back after the late show to see the land come to life in its luminescence, wow! 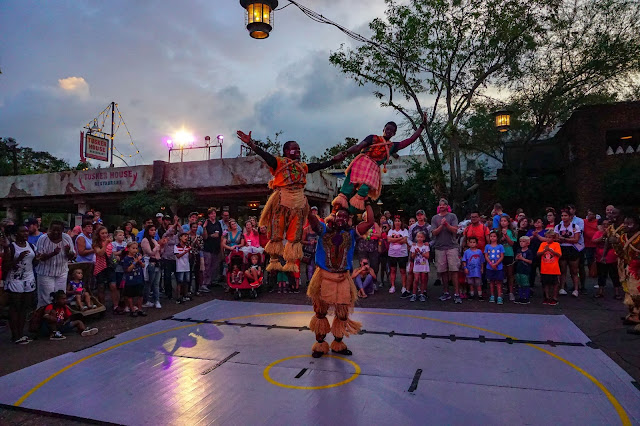 And finally we are taking our seats in the lakeside ampitheatre for 'Rivers of Light'. Our first night is drawing to a close and to be honest we have no idea what to expect. As its now been a couple of years since our last visit we have deliberately tried not to read or watch anything that would have too many spoilers (I do recommend you try to do this (slightly ironic if you're reading this  I know)  - it is just so hard now - so many temptations). Pandora for example has seriously exceeded my expectations in its theming and the pure immersive/thrill of its main ride. 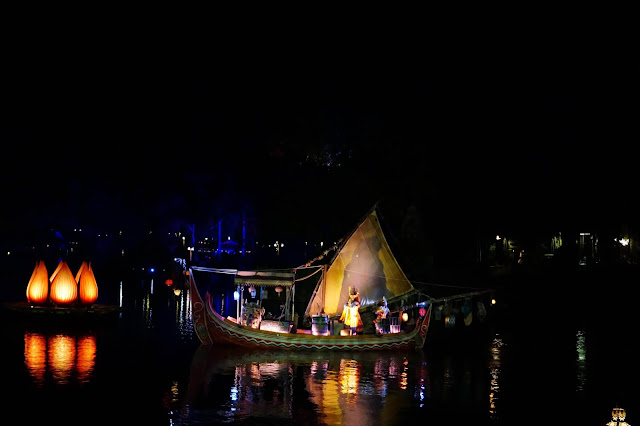 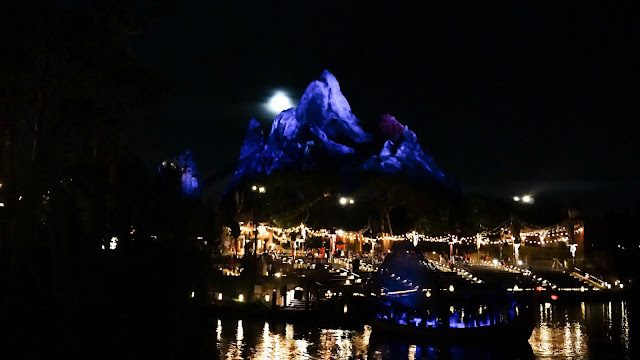 Rivers of Light suits AK very well. The music is great (it sort of reminds me of 'Dolphin Show' music from Sea World) - very orchestral, uplifting and thematic; at the same time its quite genteel and calming - no big bangs and fireworks (the animals are trying to sleep - although the chimps seem to be sat in the pitch black at the highest point possible to get the best view) - as we leave the moon is setting above Everest.