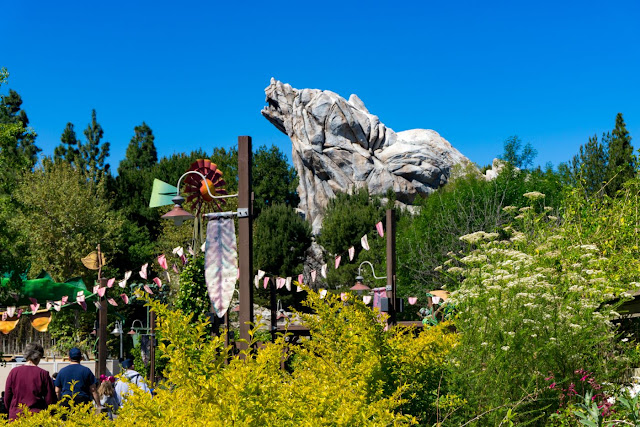 Its been several years since we have been to Disneyland CA. Last time we were in California we gave it a miss as we were stopping in Laguna but with the addition of Cars Land we just had to visit this time.


We decided to stop at the Castle Inn across the road from the park. This is something I really like about Disney California - you can get up in the morning and stroll across the road into the park - no waiting for the Disney Bus to take you on a trek around the swamps. 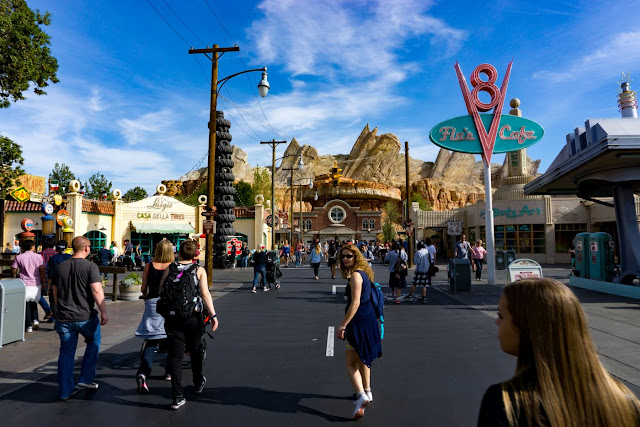 So first things first we head over to see what's new in California Adventure park. Wow what a transformation. Granted we are spoiled by Californian's perfect springtime weather; the park is looking absolutely fantastic. I swear not a spare inch of ground has been left unplanted; even if its  a tiny space between a queuing area. I don't think I have ever seen any Disney park anywhere look this good - in fact it makes Florida's flower and garden festival in EPCOT look pretty lame. Here everything is very natural with Delphiniums and Foxgloves in cottage garden schemes. 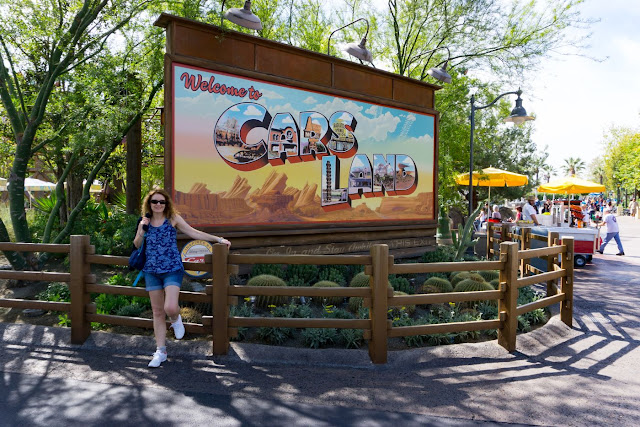 In the new Cars Land area real cacti are blooming with flowers  again matching the overall desert theming of this area. Its impossible to walk-around without  stopping to take a picture. The weather is glorious and clear. Last night our cab driver from Orange County Airport (who incidentally looked like The Dude from The Big Lebowski - I kept expecting The Credence to play) had explained to us it had been cool and wet for the last couple of days. The huge benefit of this though was that LA was smog free and super clear. From the top of California Screaming (coaster) the snow topped peaks of the Sierra Nevadas in the distance looked absolutely glorious. 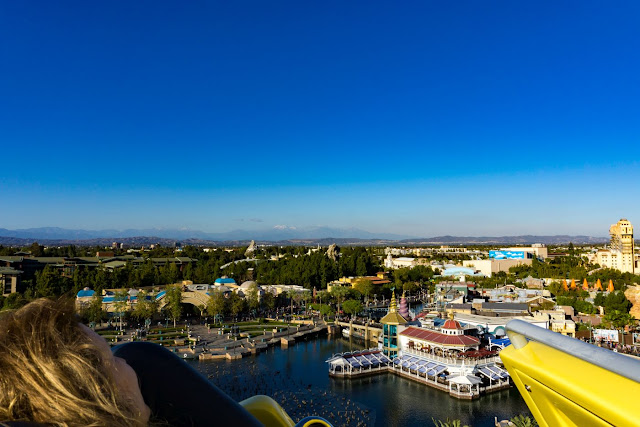 We were in the park before the rope drop and after  this takes place we follow the crowd and first grab fast passes before joining the normal queue and are on and riding Cars within 10 minutes. (Thank goodness California still uses the old Fast Pass system that actually rewards people who make the effort rather than the hugely flawed bracelet system that Florida has adopted) 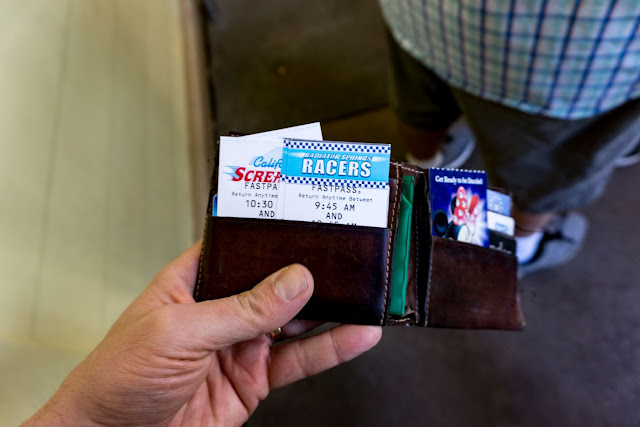 We spend the morning stacking up fast passes all over the park and riding single riders (as usual we often end up in the same car/coaster). I don't think we queued all day for more than 10 minutes on any ride the only exception (as usual) being Midway Mania though to be fair the park was reasonably quiet this being the week before the Spring Break started. 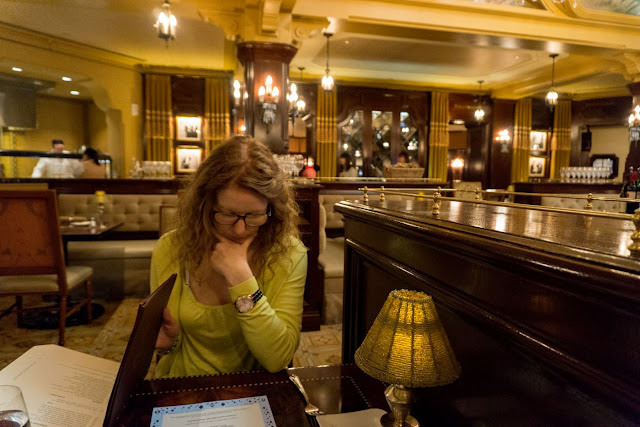 Lunch was pre booked at Carthay Circle. After a cocktail downstairs we were shown to our table upstairs. Its an elegant and well designed building though the menu in my opinion was rather limited and even by Disney standards overpriced. But its an escape from the park for an hour or two in lovely luxurious  surroundings without having to leave the park. Eating here also gives us VIP placing for the World of Colour show around the lake this evening. Another first for us, it's Disney's new 'fireworks/ projections on water sprays show'. We can't wait - but lets ride Tower of Terror a few times first :) 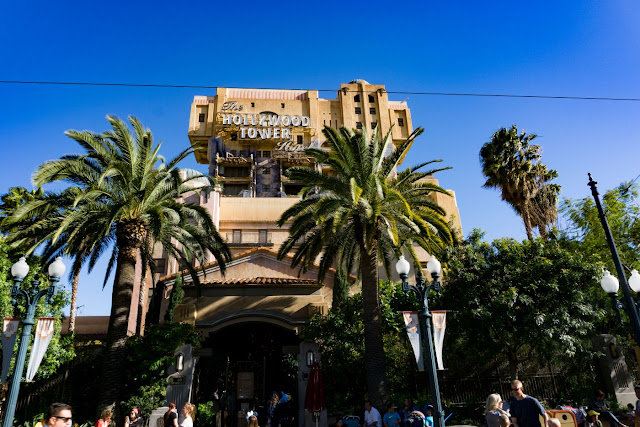 Before that show we nipped out and back to the hotel to change and grabbed a quick dinner at Denny's.

Disney has turned up the wow factor to boom for its World of Color spectacular. It more than makes up for the temporary loss of Fantasmic! (which we adored for 20 years+) The show spans the length of the California Adventure park, using the rides as backdrop. Still photos or even video really don't capture its power, emotion and force. Its design means it can incorporate any film or theme, on our night it being STARWARS' launch, just amazing.  One other thing I did like was the fact it is a tribute as well to Walt which seems very fitting here in California. 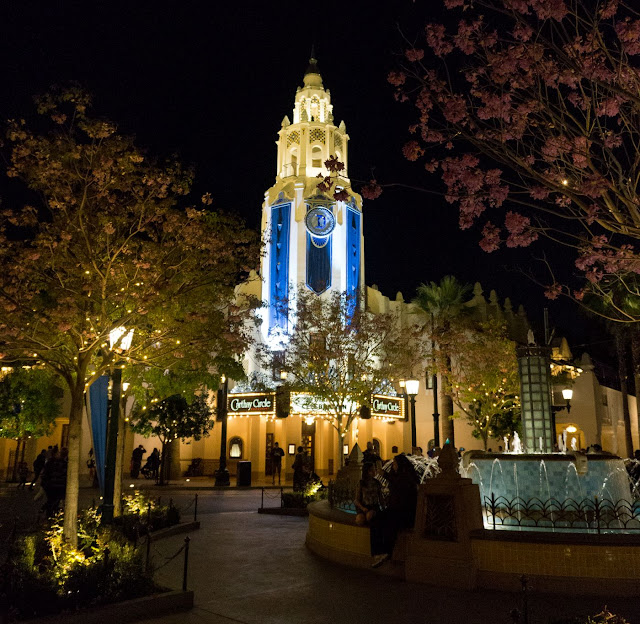 We left that evening smiling like two happy bunnies. The park looks lovely at night though its odd seeing the NO trolley when we were only riding the real thing the day before. 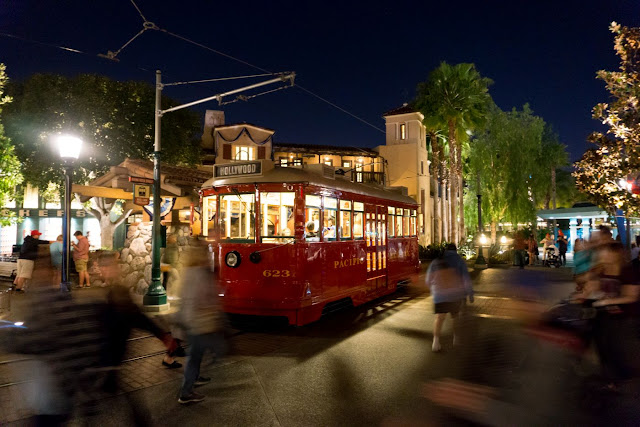 And again what a joy to walk out of the park, cross the road and jump into bed. The Castle Inn hotel itself was excellent. Quiet, big large rooms, and clean and tidy - there's also a handy little supermarket shop to grab any extras. 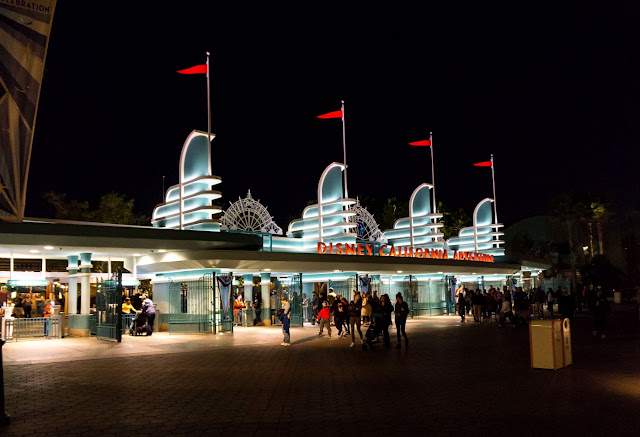