The next two days are spent re visiting all our favourites and making sure we took all our pre booked  Fast Pass options to re ride Flight of the Banshee. Trust me when I say this ride is just as good every single time you ride it - in fact it gets better and better.  Do not miss it. 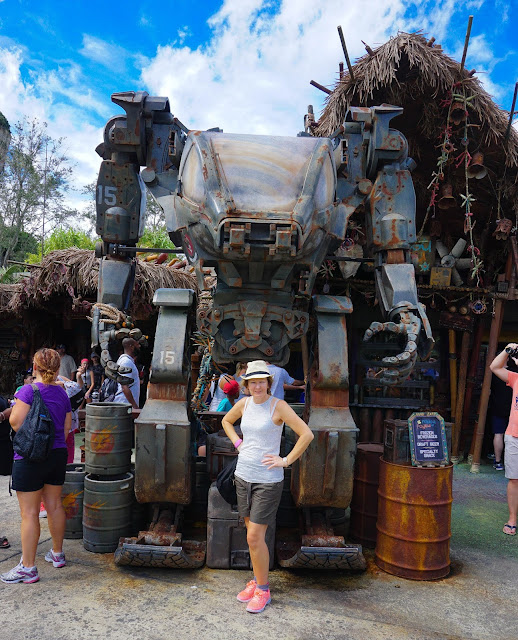 After an early morning spent riding flight of the Banshee again, it's time to pack the bags and say goodbye to the Disney All Star Resort and head out to Universal's Hard Rock Hotel - A trip we take by Uber, which we can't use at home as we're too rural.

I was impressed with the app and the efficiency with which a ride came. I was less impressed when the bill arrived by email and it was 50% more!  Fortunately there is one good thing with Uber - they know exactly what you did, how, when, where and who with - so they instantly refunded the 100% difference from the original quoted fare in a matter of minutes.

Hard Rock Hotel was chosen because of its proximity to the parks - literally a short walk along the riverside. You can of course take the boat should you wish to save your feet - though the reality is you probably have just as far to then walk from the dockside. 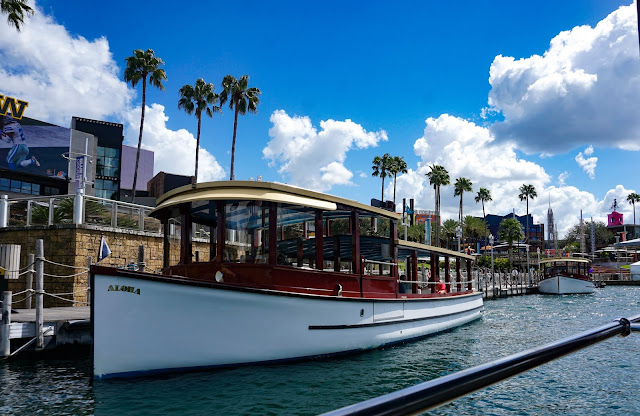 Its been quite a few years since we were last here in Universal. Despite regular visits to WDW we have not actually revisited Universal since The World of Harry Potter was just breaking ground. In some ways I'm glad - its nice to be here now the initial chaos has slightly died down (and more importantly your hotel Express pass can now actually be used in that segment of the park. 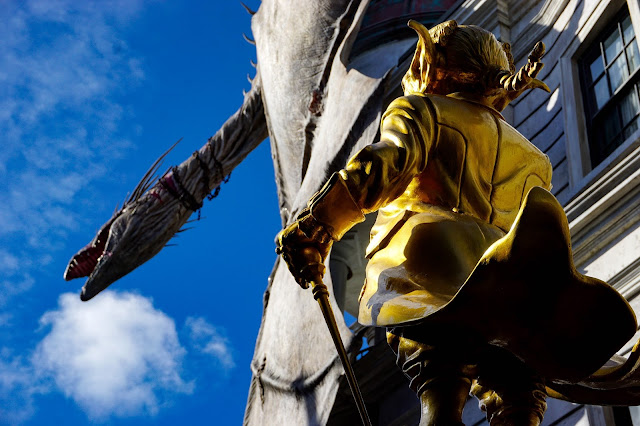 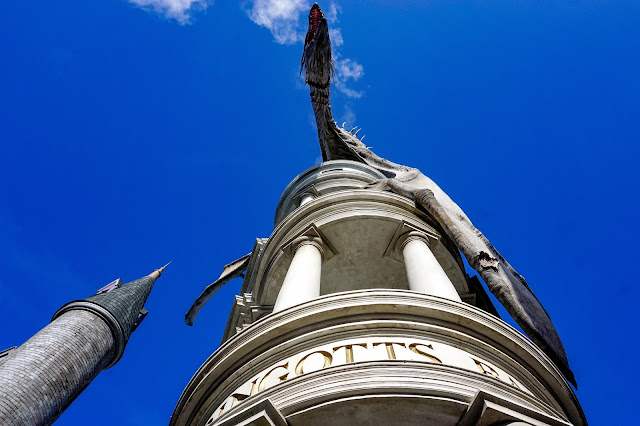 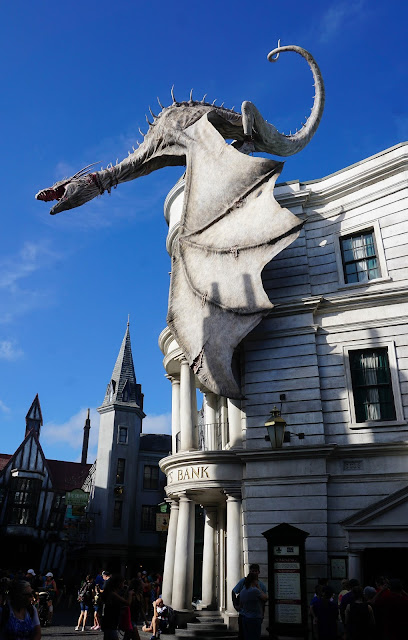 So first things first; what did we make of  'The Wizarding World of Harry Potter' - We loved it. It's wonderfully immersive and the smiles on kids (and adults) faces as they wander around (in 100 degree heat) in full Hogwarts student cloaks and scarves is a joy to see. 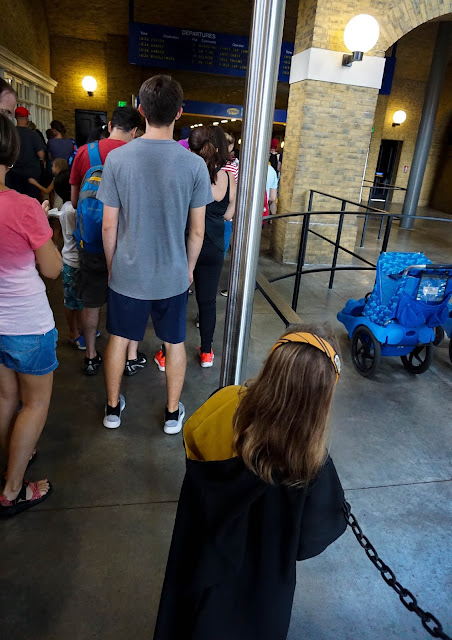 There's an attention to detail that's more Disney than the usual Universal experience and that is a good thing to see. This section is a much more themed area rather than the rest of Studios/IOA - which I tend to think of more as a ride park than a "themed" theme park. 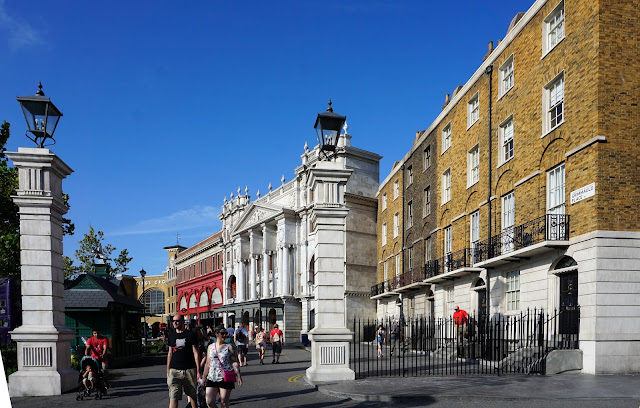 And the theming on the inside of the rides is just as fantastic as the outside. Gringott's bank lobby is quite literally a breathtaking recreation of the films set - lots of tiny details bringing it all to life. 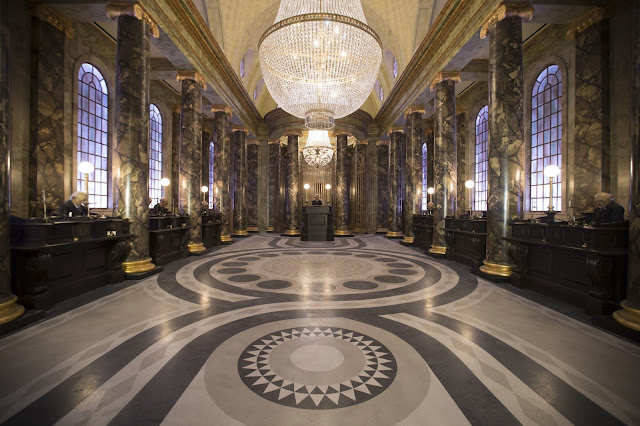 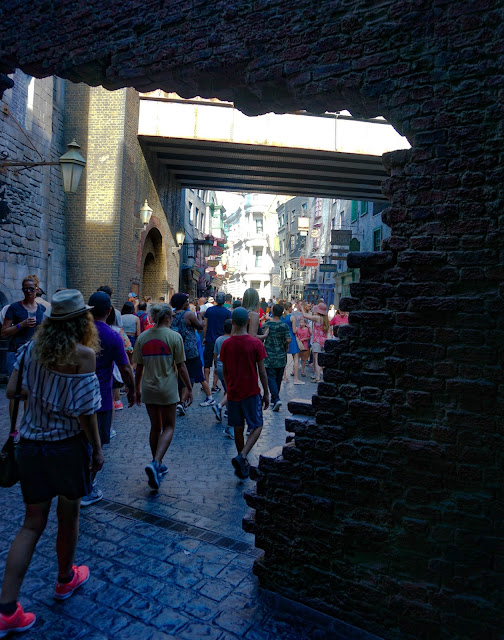 From the Studio side of the park you pass through the secret wall in to Diagon Alley. Gringotts bank is the key attraction here and is an excellent ride that takes elements of 3D Projection type rides (like Spiderman) but combines them with a coaster style of track and  movement. Quite thrilling and it's definitely worth a few rides. 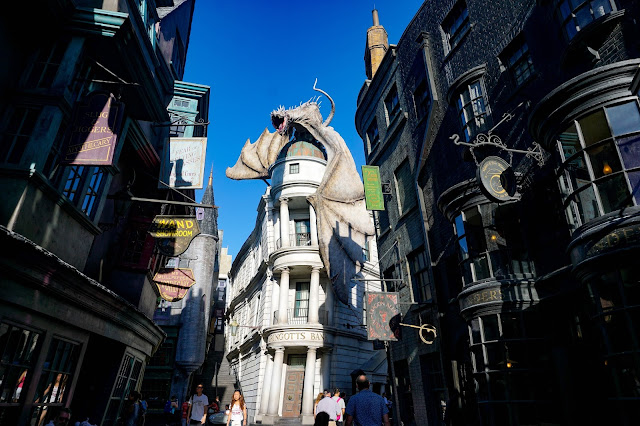 One of the complaints you often hear regarding WWofHP is that it's a little short on rides but very heavy on shops and up to a point that's true  - though you have to remember its only one land in a huge park. Universal have been (financially) very clever though in splitting the two A class rides across both parks (meaning you will need to pay for a multi park ticket to take the Hogwarts Express from Kings Cross to Hogsmeade and see/ride it all. 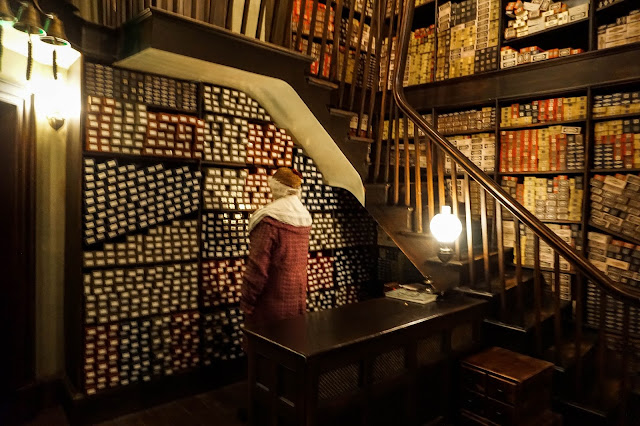 One thing I would recommend you do is call into Ollivanders wand shop for the little side show (lets face it it's a sales show in the end - but its great fun and quite touching, especially for students in full gear as they will always get picked to have a wand match) 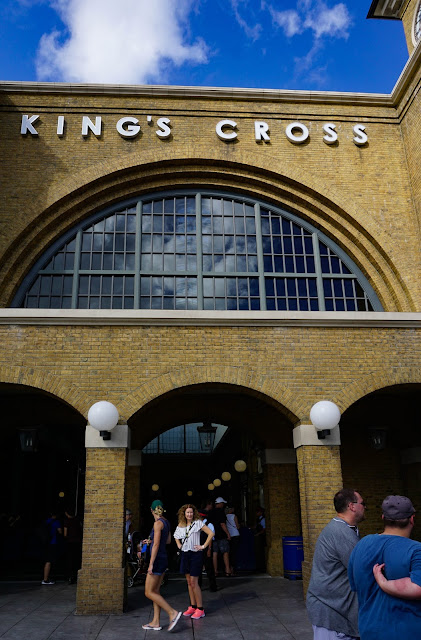 Its soon time to head to Kings Cross and find our way to platform 9 and 3/4. The whole Kings Cross set up has some great little touches such as the live departure boards. You have to show your ticket at the first entry point to prove you can enter both parks and then you are sent on your way through a quite bland and therefore eerily authentic London brick terminus. 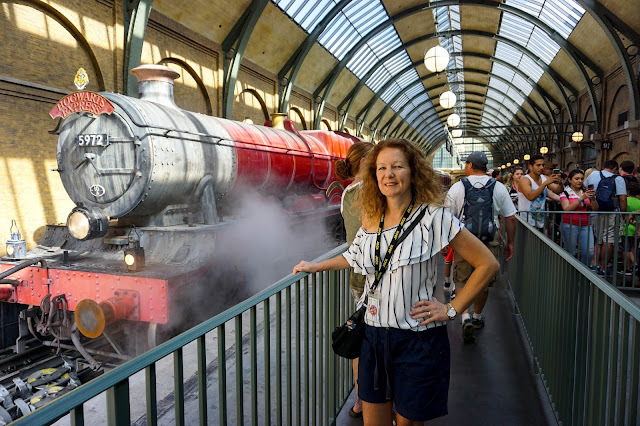 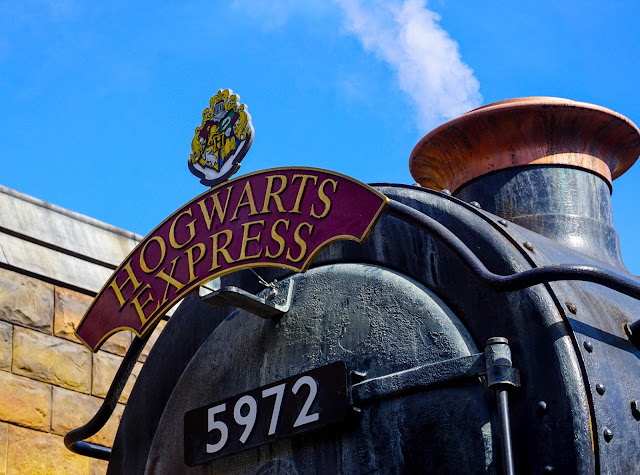 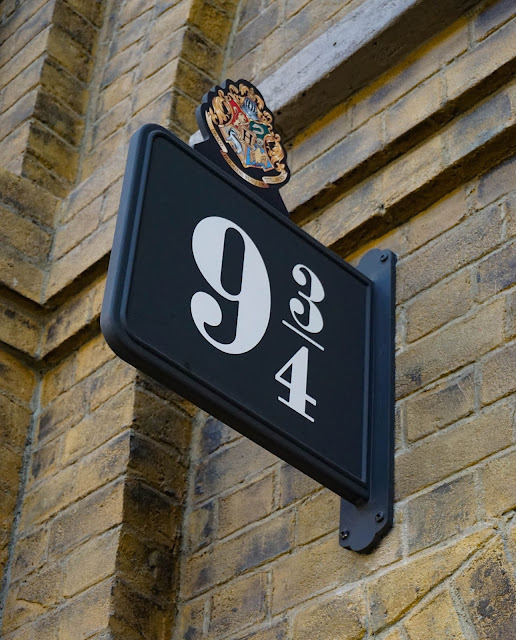 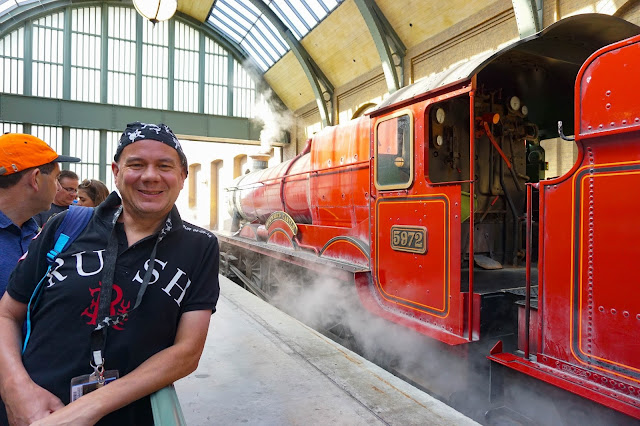 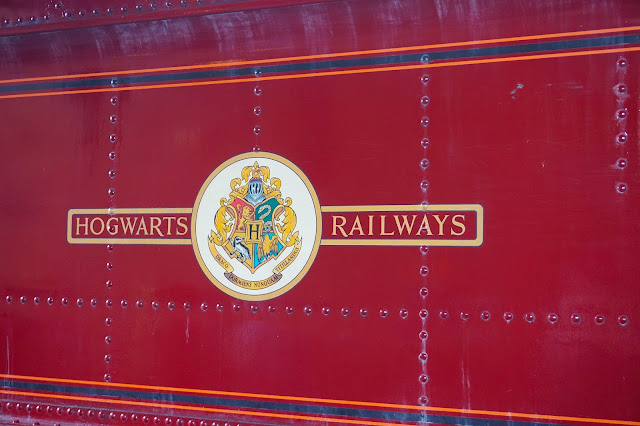 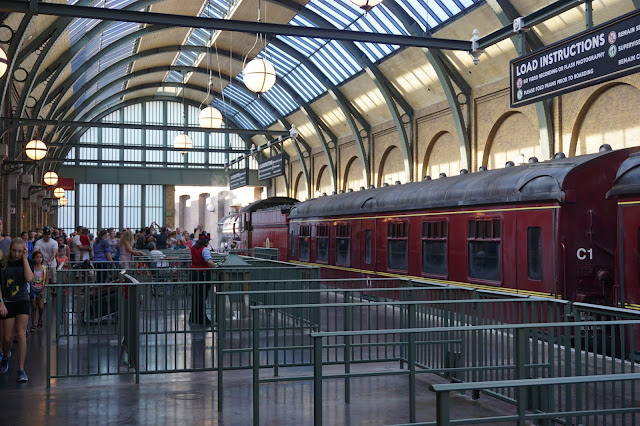 There is a simple but highly effective trick that has you walk through the wall into platform 9 & 3/4 and you emerge with the Hogwarts Express sitting in all its glory ready for boarding. Again everything has been wonderfully recreated, right down to the weathering on the carriages and engine's exterior. 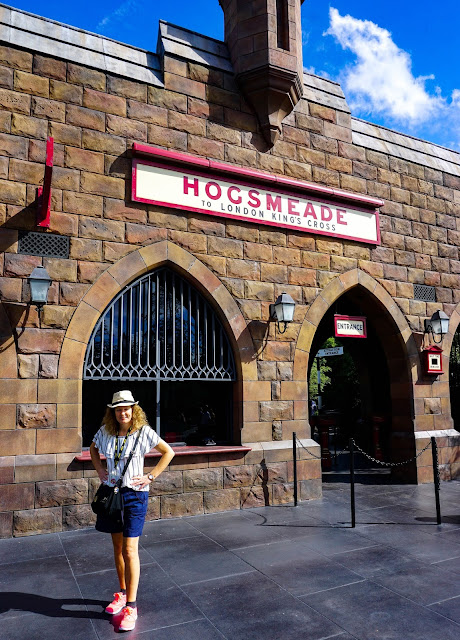 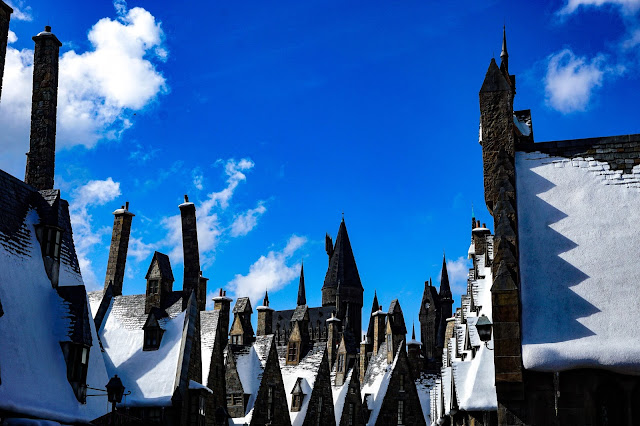 You arrive at Hogsmeade where the theming is now that of the the small winter village near Hogwarts school. The false perspective tricks are really well done given the school the sense of size it needs - though the fake snow does nothing to cool the temperature down unfortunately. 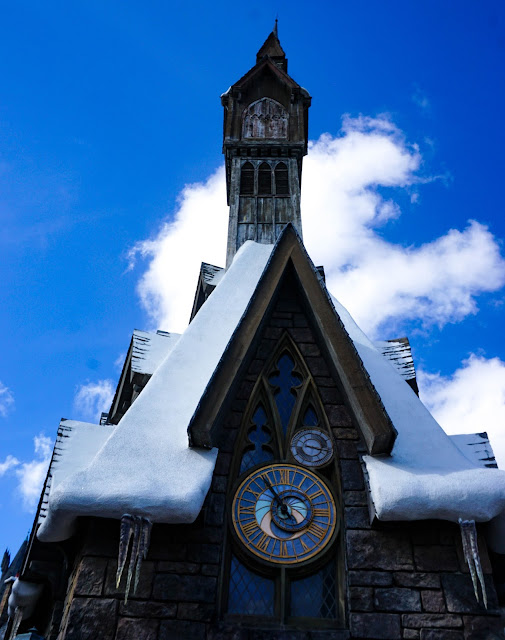 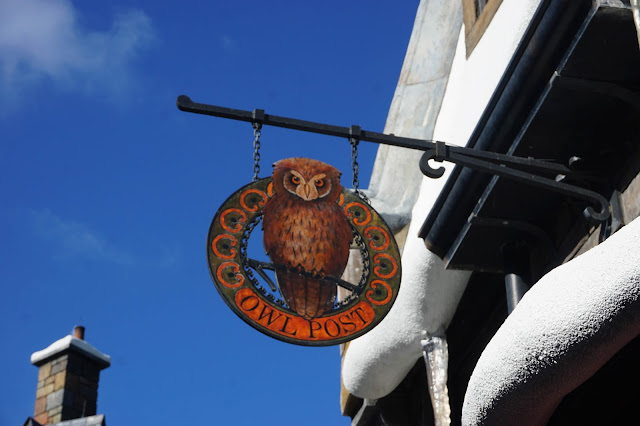 It's at this point that our (quite deliberate) lack of research into this area paid off once again with an hilarious surprise. 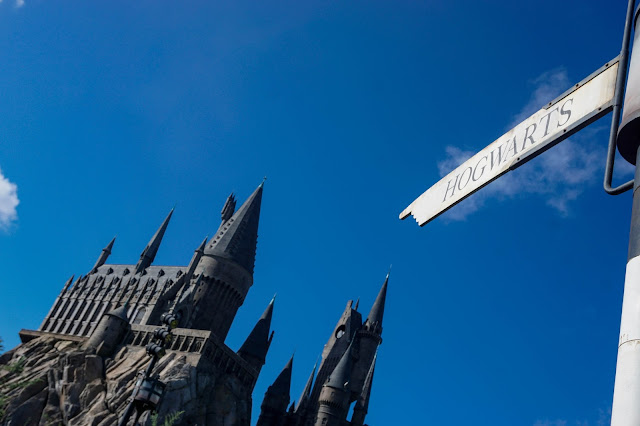 We both had it in our heads that on this side of the park the only rides were re themed versions of Dueling Dragons and the other small coaster. So we headed over to Hogwarts and entered the line for 'Harry Potter and the Forbidden Journey' (assuming this is the new name for Dueling Dragons) using our express pass :-  as the line was empty we did take our time wandering through as even the quick line has some great theming; the portraits etc (nice to see Dawn French has a prominent placement.

Reaching the front of the line we are suddenly baffled by the fact that the cars are entering the boarding area sideways and you enter them from a moving walkway a la Haunted Mansion. Hmmm this seems odd but we take our seats only for Hermione to cast a spell and throw us onto our backs in the first few seconds to enjoy an absolutely fantastic ride (if rather hilarious as we are both laughing so much at our error) on 'Harry Potter and the Forbidden Journey'. This ride uses quite a unique tech which involves a great mix of full scale live animatronic sets and projection screens combined with what's best described as a robot arm on a track that hurls you about in perfect sync. Truly superb. 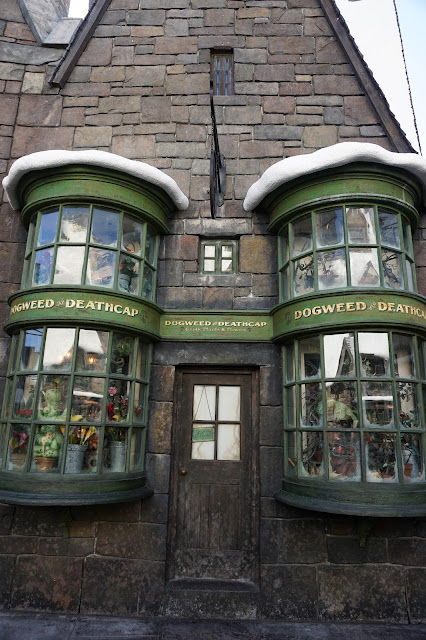 Later we notice that Dueling Dragons is in fact behind a screened off area and is being demolished (there are two half loops to nowhere left) to make way for the latest new addition to WWoHP.

There's obviously a lot more to Universal Studios and Islands of Adventure than Harry Potter but it does seem fitting as this is our first visit to the HP lands to concentrate on them.

There were some new additions to the actual parks and we really had a great time on Skulls Kong Island which is a great take on the 3D mix of projection and ride - just felt a little short. I can't say the same for Transformers though which was dullsville. 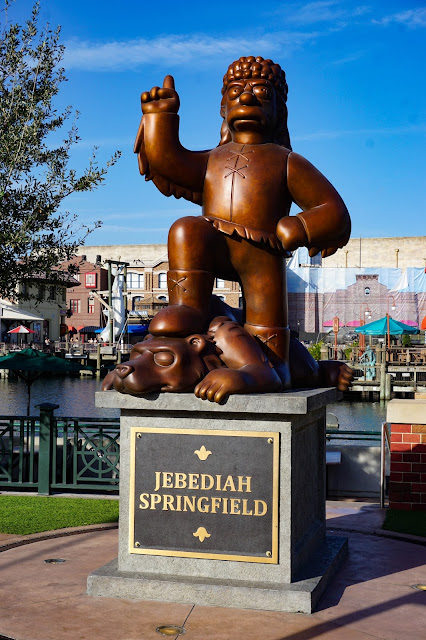 And the Simpsons - not just a great ride - but its actually a good story; though when they built this ride originally as "Back to the Future" who on earth came up with an exterior queue, too hot dude! 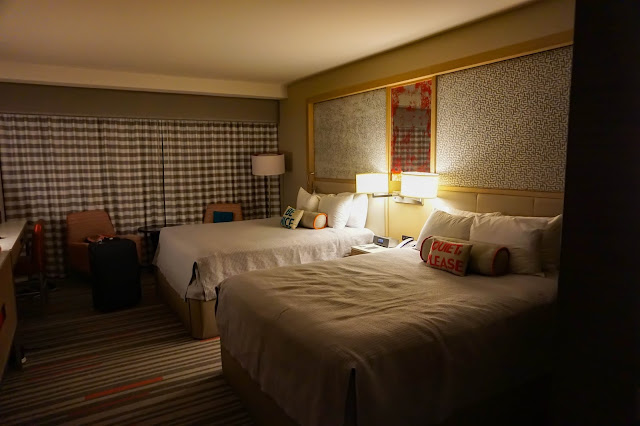 The hotel was great for our two nights here - luxurious after the budget choice in Disney - though to be honest I actually quite like the motel style of the Disney rooms where your rooms door opens onto fresh (ok lets be honest - fresh hot and humid) air rather than a bland corridor.

After another leisurely morning in the park we once again use Uber (no problems this time) to take us to the airport and travel back with Virgin directly to Manchester in our favourite seats upstairs in the bubble.


Click here to return to Part 1 -3 All Star resorts
Email ThisBlogThis!Share to TwitterShare to FacebookShare to Pinterest