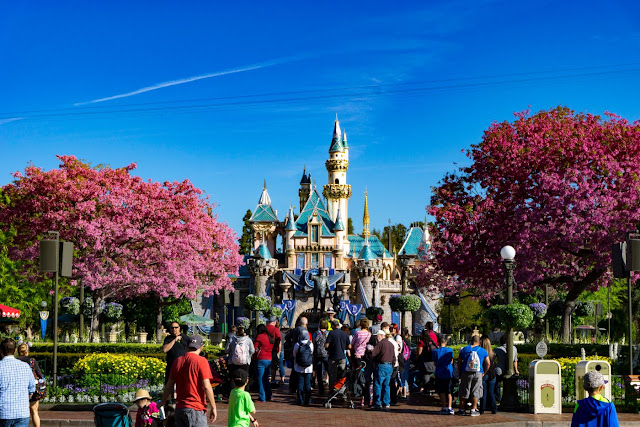 [Being Written] Wow if we thought that  Californian Adventure looked beautiful then Disneyland itself is looking ethereal. Cherry Blossom, Apple Blossom, Hyacinths, Violas, Delphiniums, Verbascum, Foxgloves etc etc. Its like someone took a crash course in English cottage gardens and implemented it to perfection. Spring is definitely the time to visit this park. 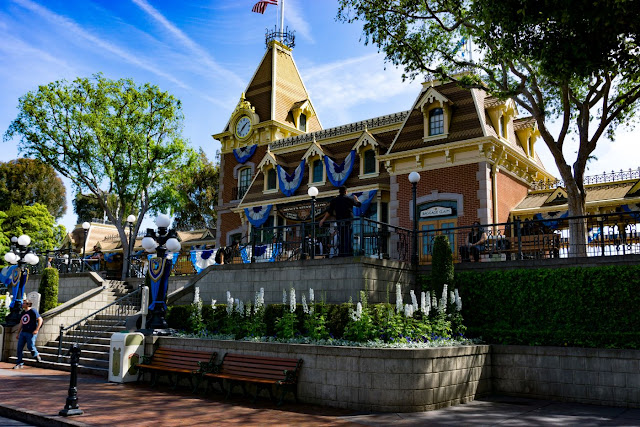 As you can see from the top (rope drop) picture the park was nice and quite first thing in the morning. The only things that were not a 10min  walk on were anything in Fantasyland, the Finding Nemo Submarine Voyage (short queues but its loading times are so slow) and Space Mountain whose re themed for Star Wars additions were the latest draw. When Indiana Jones is practically a walk on all morning you can tell how much impact the redesigning of California Adventure has had. We have early entry tomorrow morning so decide to skip all of Fantasyland and leave it until then and head straight onto Space Mountain to grab fast passes and then take it easy (well as far as being shaken to death on Indiana Jones can qualify as taking it easy). 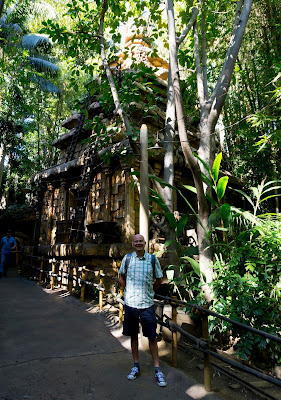 We were already fully aware before we set off that a lot of this park would be closed off though to be honest it didn't spoil our experience one bit - the only thing we truly missed was not seeing Fantasmic here again as its so much better than the Florida version with its tin tug finale :) and its so long since we have seen it here. If a ride is closed  the cast members for that ride base themselves at the entrance to provide information and some form of entertainment.  On some attractions this works better than others. Jungle cruise had a "We tell jokes" stall which worked when the public interacted well but had most people running past thinking "Don't make eye contact - Dont make eye contact" 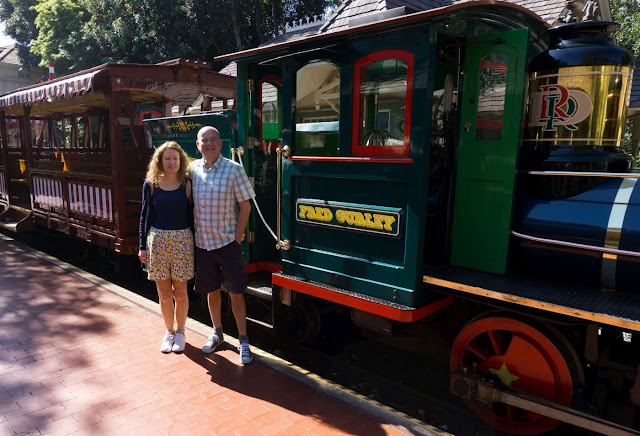 The train crews though had a great set up. At the various railroad stations the locomotives had been parked as stationary museums - Fred Gurley (the oldest built in 1894 for sugar cane transportation in Louisiana went into service at Disneyland March 28, 1958 after a full reconstruction ) was based at the Frontierland station and that morning we had her all to ourselves. The conductor and engineer took us on the footplate and then showed us a reconstruction of its oil fired engine which allows you to blow off the whistle. 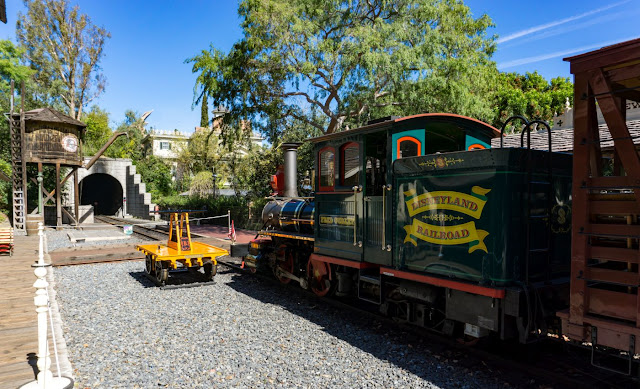 We spent the rest of the morning riding all the old faves and making comparisons. Big Thunder has had some great new effects added since we last rode it. The mine section now has the dynamite fuse flickering and following you up the track along with a nice explosion effect.
From the top of BTM you get a good view of how the far side of the  lake has been damned up and drained to accomodate the construction on the new Start Wars land. 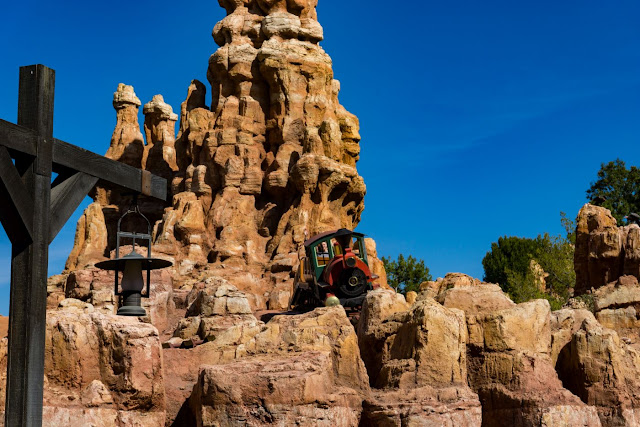 Haunted Mansion is such a gorgeous building here (though again its a bit deja vu - are we back in New Orleans) and I love that here you enter (as in Paris) through the front door. 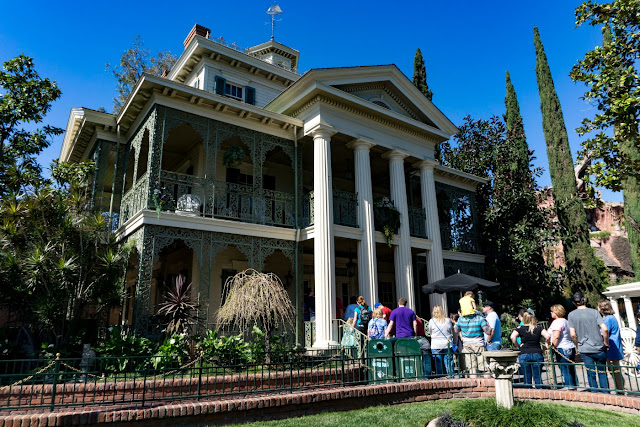 For lunch today we left the park and had it in the Grand Californian at the Storytellers Cafe. Again we ordered a variety of starters (and again we could have fed an army). Ribs, Flatbread, a lovely  soup and some excellent crab cakes. I'm always  slightly baffled why these places are always so quiet at lunch time. Why people want to wander around with a luminous turkey leg in there hand when you can be sat sipping wine and relaxing  has always mystified me. 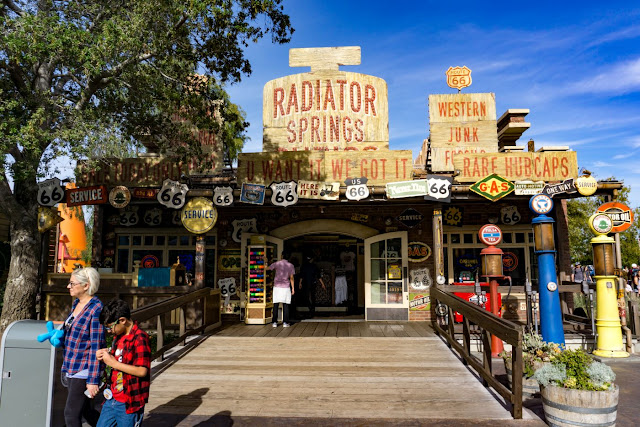 After lunch we returned to California Adventure. Soarin had reopened though not with the new film yet, just the new projectors (it did make a nice change to experience it a) in focus and b) dust and scratch free but the new film cant come soon enough (I think its June).


After a full afternoon riding things we missed, things we had forgotten about (Monsters inc is still a fun little ride - we rode it last when it was 90% finished on a soft opening) and things we normally pass on when the parks busy (Goofys Sky School - a wild mouse type ride that scared the living daylight out of us and the Silly swings symphony carousel is just fun) we headed out to and grabbed a nice dinner at the restaurant side of La Brea in Downtown Disney.

Then back into Disneyland for the night parade and the fireworks - impressive as usual but I'm now stuck with "Let it Go"  running round and round my head. AAARRGGH