A 2 hour drive into a wet and windy spring afternoon in Hull. Its Dans birthday so we decided to book a quick P&O mini ferry cruise to Brugges. Not a place (or country for that matter) we have ever visited before. 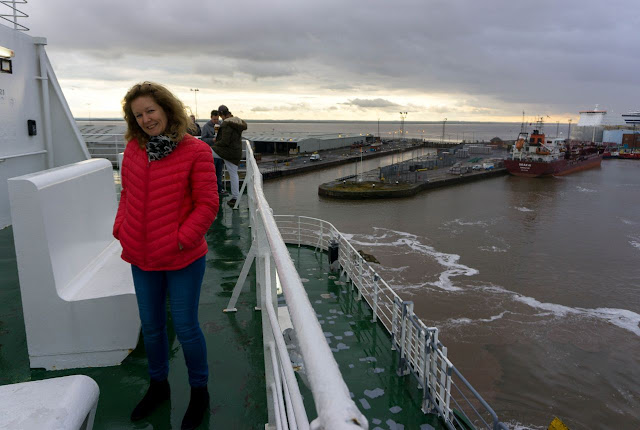 We have a few hours spare on arrival so we spend it wandering around the 2017 European city of culture that is Hull. There are indeed many impressive buildings here from the Victorian age and some god awful 1960s disaster sites - my favourite being the (hopefully deliberately ironic) University School of Architecture which looks like a cross between a block of tenement flats and a multi-storey car park - its probably a listed building. We find a lovely little tea shop on the harbour front and indulge in clotted cream, scones and strawberries to pass the time and watch the rain pass - which thankfully it does.
A short drive to the port and we are parking  at terminal 2 where we decipher the bizarre codes used on the pay and display machines to try and make it give us a ticket for 48hrs. We then spend a further 15 minutes helping every other confused soul wandering around the car park in confusion. 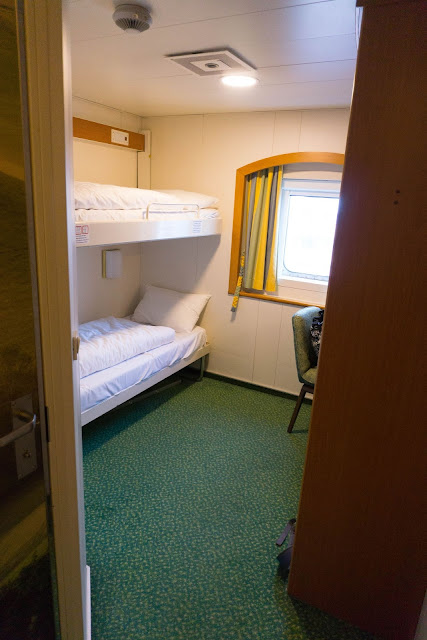 Check in is fast and after being given various bits of paper and tickets for meals and for the coach into Brugge we are ready to board the "Pride of York" (formally the MS Norsea 1987). Shes a good old fashioned roll on and roll back off the way you came ferry (as she only has a back drive on door). Basic, but amply functional with a couple of lounges/bars, a coffee shop, a huge duty free and two restaurants; one buffet style  - though we chose The Brasserie - the full service option, which was good.
Our outside view room consist of a private bathroom and shower and a pair of single beds bunk style. Clean, tidy and adequate for a couple of nights. We head to the Brasserie and book a table for later in the evening (your buffet coupon is worth £19 against the a la carte menu here and anything in excess of that you simply pay for at the end of the meal). 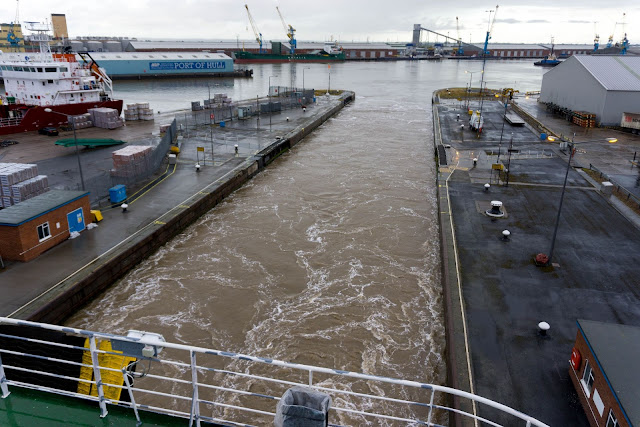 A Campari and beer in hand we stroll outside to watch the final trucks and cars being loaded on board and we are soon on our way. Oddly the dock used by the Pride of York is tidal so the ferry has to pass through  a  lock system first and there are literally inches to spare on either side as the ferry passes through it.

Dinner that evening is excellent - a starter of mushroom thermidor followed by a beautiful fillet of Bream - cheese and crackers for me (wine by the way is served in healthy 250ml measures on board)  and a chocolate melting pudding for Jack. The restaurant is very relaxing with excellent and professional service from the entirely Portuguese crew - good choices on the menu and decent choices for wine. We didn't even look at the alternative self service option but looking at the queues to get in I'm glad we didn't bother and had done a little research in advance.

I wouldn't say we had a great nights sleep - in fact it was quite a shock to find it was morning (I had rather stupidly totally forgotten about the time difference). One slightly annoying aspect of these mini cruises be it on ferries or the cruise lines is the clientele they attract can be a little too heavily aimed towards the hen and stag party. Anyway there's no chance of oversleeping as you're awoken an hour before docking by a tannoy announcement which is literally two inches from your ear if you chose the top bunk. 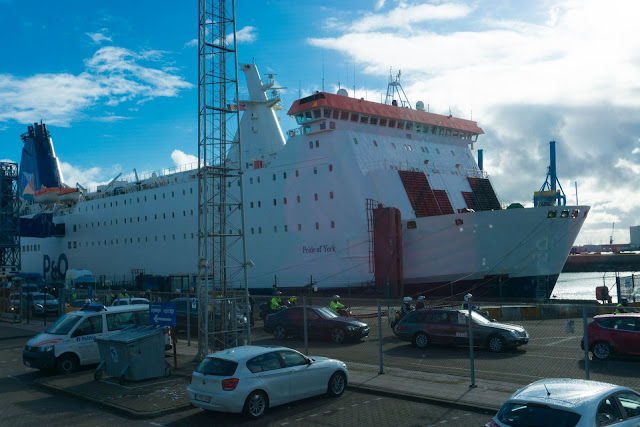 After a hot shower we were dressed and ready for the  good cooked breakfast to set us up for a day in Brugge (Again we upgraded to the Brasserie - no queues, private table service on white linen, and hot food - just do it). The weather had cleared quite nicely and included in your ferry ticket is a transfer into the city from the port of Zeebrugge which is about a 25minute trip. 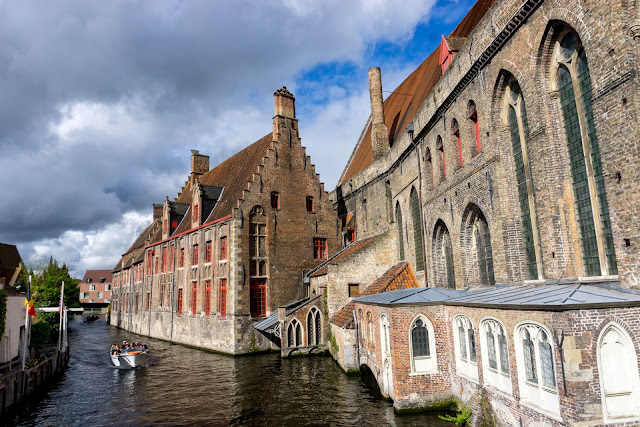 Brugge rather like Venice is one of those beautiful medieval cities that is best enjoyed by simply wandering in and getting lost among the streets. Our research consisted of little more than watching "In Brugge" the 2008 film with Brendan Gleeson and Colin Farrell and glancing over a few web sites. Basically head to the square, take in the surroundings, sample the gorgeous beers and find somewhere in a quiet side street for lunch. If you're a chocolate lover you would be in heaven, every other shop sells nothing but  - though its difficult to work out whose producing their own and whose just selling mass factory produced Belgian Chocolates (do a little research first if le chocolat is your thing).

So what did we do - I'll simply let the photos do the talking but basically the top bucket list items seem to be climb the 366 steps to the top of the belfry in the market square, visit the only Michaelangelo statue outside of Italy in the church, walk around the cute wooden windmills that lie around the towns edges - drink gorgeous coffee and beautifully crafted beers from the various monesterys and lose yourself among the beautiful houses and streets.

For lunch we dived into the smaller side streets away from the Market Square and found a  lovely little bistro bar called "Diligence" which purely by coincidence was the same restaurant used for a scene in the film "In Brugge". There's a 'lovely' little description on the door as you enter which must be one of the most bizarre claims to fame ever "Here was shot the scene in the bar with the dwarf and the prostitute". Its also apparently a favourite haunt of the Belgium Prime Minister - anyway the food is excellent and the wine simply sublime. 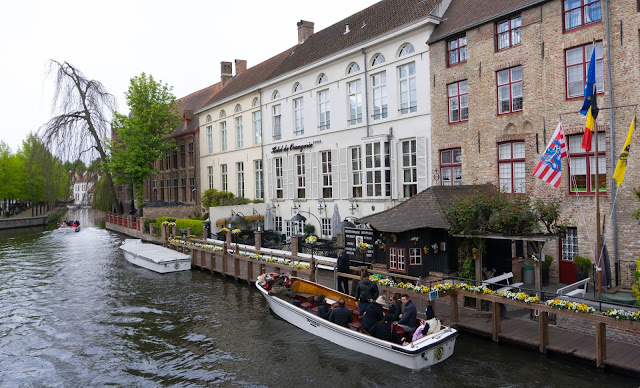 The big touristy and reasonably priced option (as its set by the city at 8E) is to do a quick canal trip around on the little boats you will see darting around, personally I would leave it unless your visiting in the summer and want to get into the shade and nearer to the cool water otherwise it could be a little nippy - also its hard to actual get pictures from such a low vantage point. 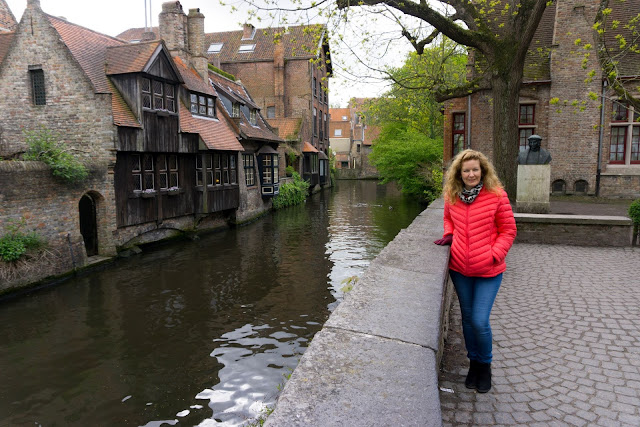 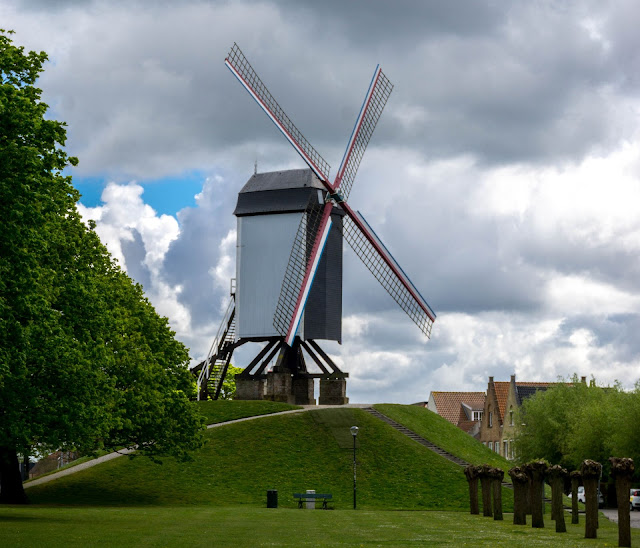 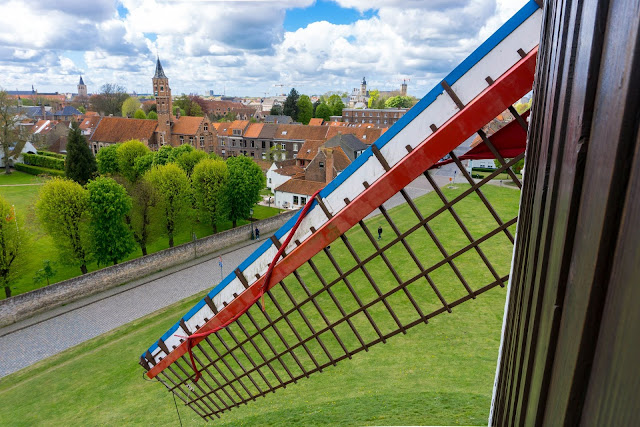 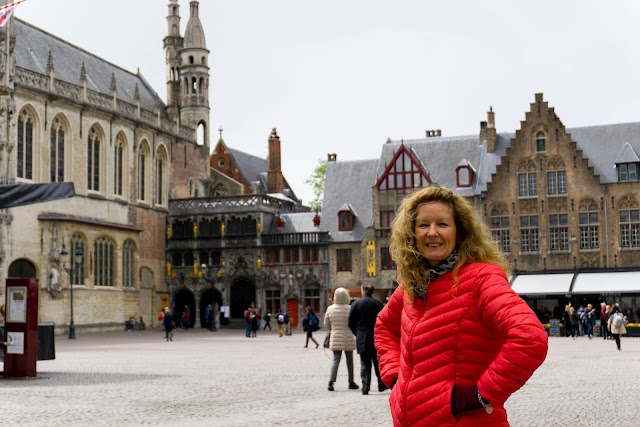