The Caledonian Express to Inverness - part 1

Living in Lancashire there isn't really an  opportunity to travel on one of the great romantic overnight train routes. Technically it seems a bit silly to head south to come north again but with London only 2 hours away from Manchester by train it's quite an easy trip to make. So we left Manchester at 10:55am  on the Virgin Pendelino service to Euston. -just enough time for lunch, wine and coffee before pulling into Euston at 1pm.  This is a great mid week service as it hardly stops at all and gets you in to the city just in time for a matinee at the theatre, an early dinner and then a hop back. 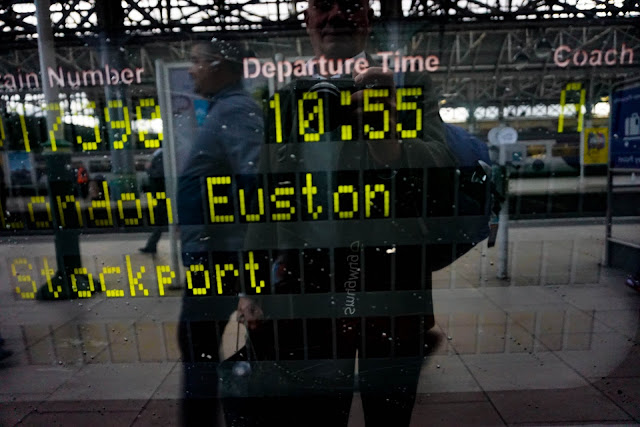 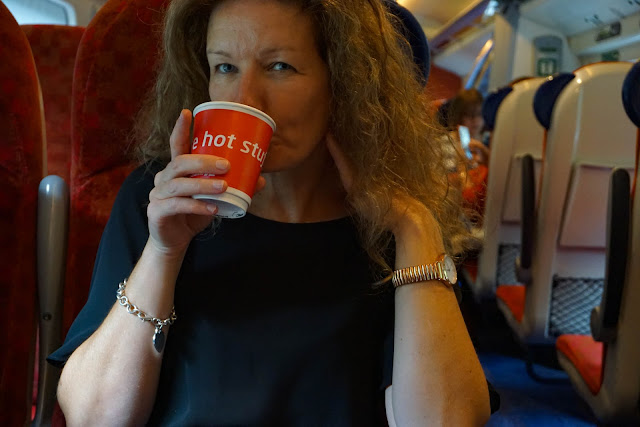 This time we had decided to pass the time (as you board the Caledonian Express at 8:30pm) by heading to the Tower of London, taking advantage of the arrive by train offer (show your train ticket and you only pay admission for one person, the other gets in for free). There's actually a couple of reasons for wanting to do this; I think we last visited the Tower of London over 20 years ago so a revisit was always on the cards but secondly it had been all over the local press recently that a locally born Sergeant Major had become the first woman in 10 years - and only the second in history - to be made a Yeoman of the Guard at the Tower of London.

We both much prefer to walk around London (though to be fair the Tower is quite a hike across the city), almost 3 miles each way!). People do miss so much by getting on the tube (often to travel distances that would be far quicker to walk anyway). This time we decided to head south past Russell Square then on to Aldwych before striking left to the Courts and from here  through the lovely quiet streets of Temple before continuing along the Thames. 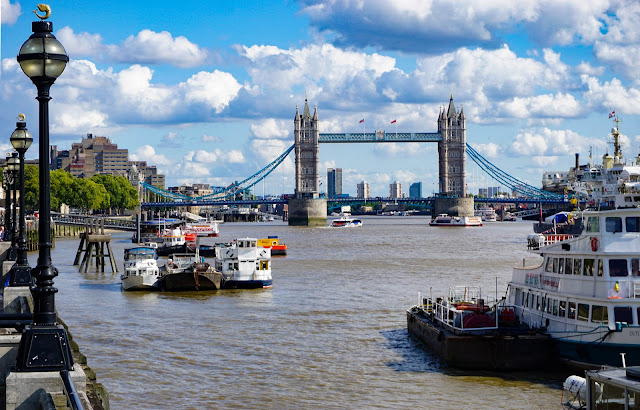 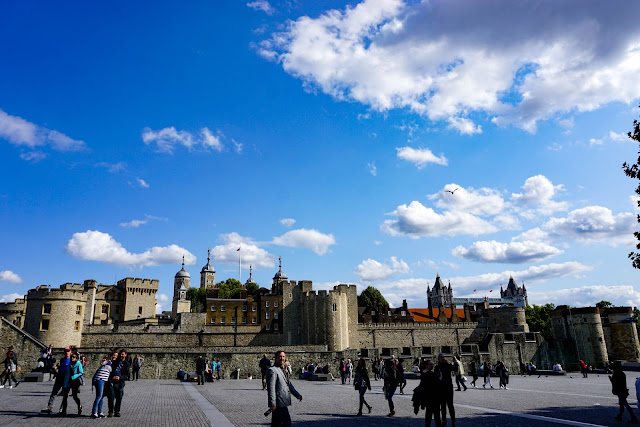 A Quick History Lesson - The Yeoman Warders (Beefeaters)  are descended from the ancient band of warders who guarded the gates and royal prisoners early in the Tower's history. Their modern duties mix a traditional ceremonial role (ceremony of the keys every night etc) with leading tours for visitors. They are still extraordinary members of the Queen's bodyguard and, to qualify, applicants must have served at least 22 years in the armed forces, hold the long service and good conduct medal and reached the level of Warrant Officer. They live in the grounds of the tower in cute little cottages which line the cobbled streets between the inner and outer walls. 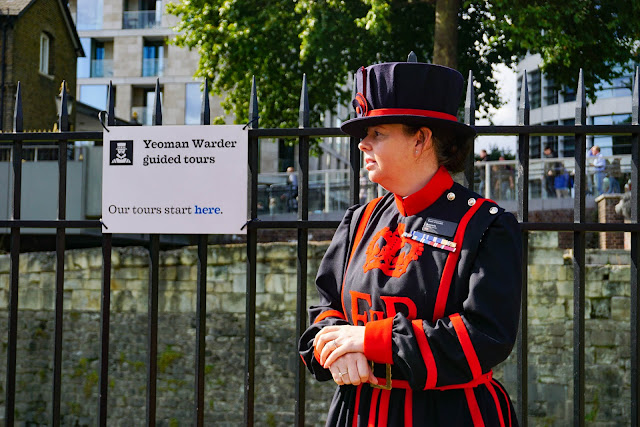 As you enter the tower you're directed to a waiting area in the old moat should you wish to hear the 'Story of the Keep' which serves as your guided tour conducted by one of the Warders. To be honest it would be quite a coincidence if  our local Sergeant Major would be doing this just at the time we arrived but to our delight it was indeed Amanda. 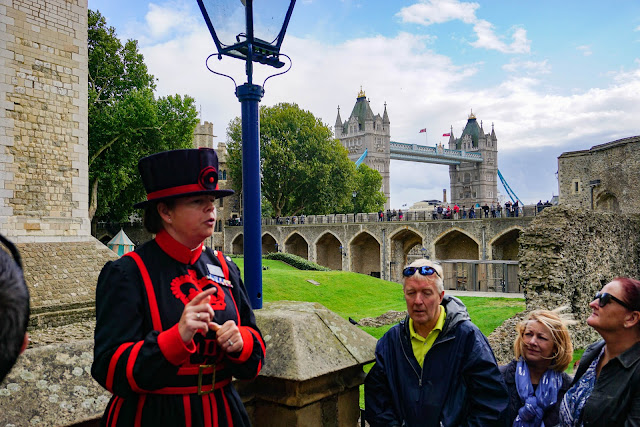 Once a warder is inducted the first challenge they face  is to prepare for the Ceremony of the Keys, a closing ceremony that has taken place every night without fail for at least 700 years. Next they  have to learn word-for-word the ‘Story’ – the script of the famous Yeoman Warder Tour of the Tower. As we finished the tour in the  Chapel Royal of St. Peter ad Vincula, Amanda  drew breath to ask if we had all enjoyed ourselves and announce that this had been her very first day of tours. Now that's not just coincidence - its a bit spooky :) 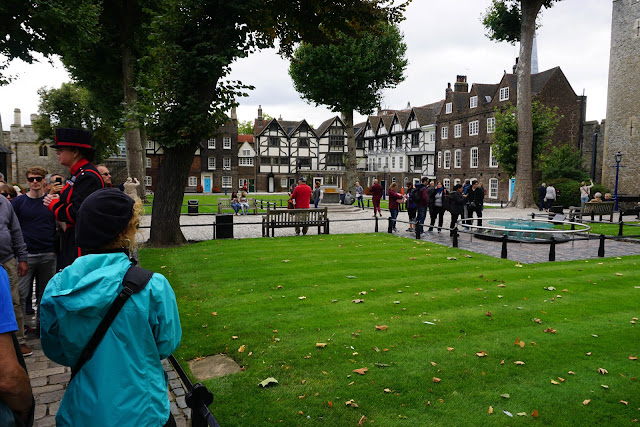 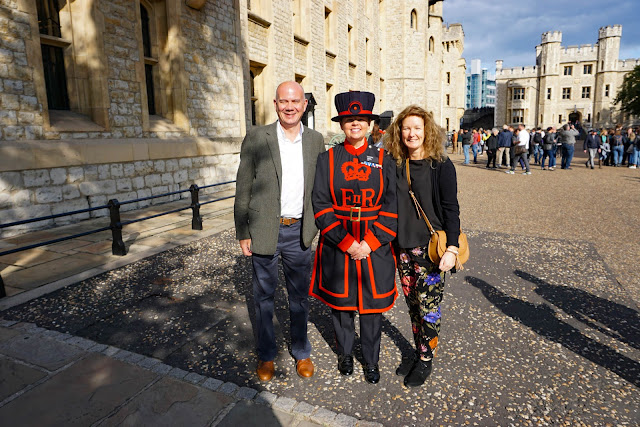 We had a lovely chat afterwards (all expressing our disbelief in how the stars had aligned for this event)  and shared a few photos before we carried on to explore the rest of the grounds. 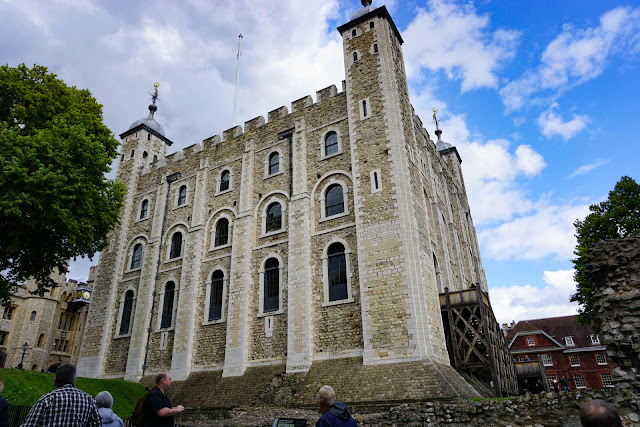 We left the Tower as it closed at around 5.30pm but still had a few hours to pass before we could board the Caledonian. First things first - time to find a place to sit down and  relax as we have been walking all day and still planned to walk back to Euston. We found a lovely little independent coffee shop near Fleet St and enjoyed cake, good coffee and rested feet.
One thing I am starting to dislike about modern London is  that you could almost be in any city in the UK due to the plethora of branded coffee shops and restaurant chains  & clothes shops. At least the pubs all seem to be doing a roaring trade though when the city suits all leave their offices.

We head back to Euston through the city, passing the Bank of England and the Stock Exchange before passing by Guild Hall Square and through the Barbican - awash with summer colours from the flats' balcony gardens.  Then heading North via Hatton Garden we take another break in a traditional pub for pre dinner drinks before we board the train.

Euston is crazy busy as usual and still retains the award for being the ugliest railway station in the world bar none. Hard to believe they knocked down the beautiful original building with its doric arched entrance and cathedral like great hall to build this fifties concrete monstrosity. 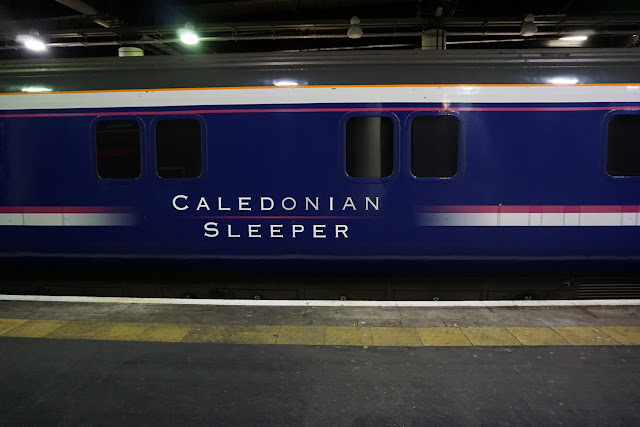 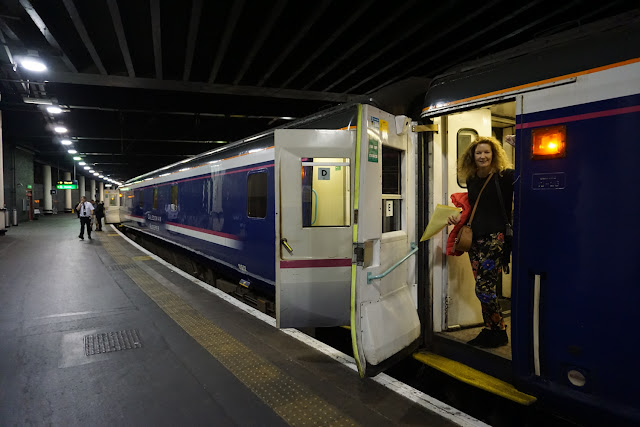 The train is set to leave at 9:15pm but you are allowed to board at 8:30pm to get into your cabin, unpack and if 1st class; head for the lounge for your dinner and drinks. Check in is smooth and quick and you're directed to your coach and cabin. The Caledonian is the longest  train in the UK comprising of 16 coaches which are split at Edinburgh whilst you sleep. One portion is then taken to Inverness, the other to Fort William. 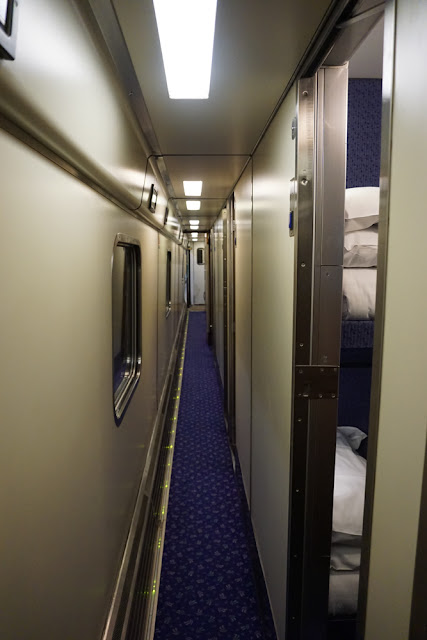 Compared to our overnight trip last year in the States  - on Amtrak City of New Orleans (click here to read about that trip) - the Caledonian's cabins are best described as tight and functional, hopefully the ride will be smoother and the horn blasts less frequent. This is in fact the last year that these old coaches will see service as from summer 2018 a whole new train has been built with larger rooms, proper restaurant cars and lounges and in room showers. 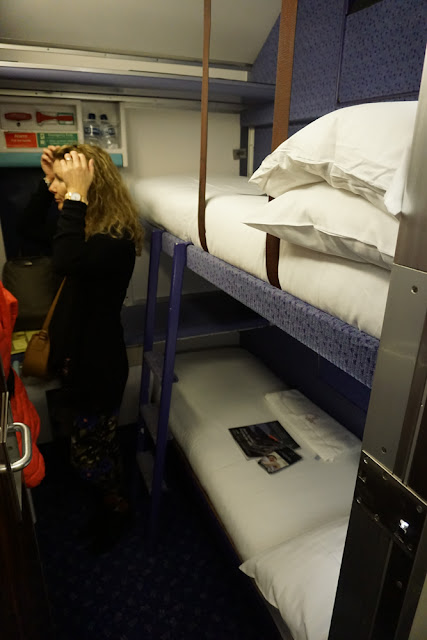 In the lounge - a carriage with couches down two sides and tables and chairs at one end with a kitchen - we order wine and dinner, both opting for the hearty sounding Lamb Cassoulet washed down with a great bottle of Malbec and finish with a selection of highland cheeses and a superb blackberry fool and blueberry cheesecake. There's a great selection of malt whiskeys from the well known to some rarer samples - probably explains why this route is rather popular with Scottish members of parliament. Our fellow travellers in the lounge are a mixture of single office workers and serious walkers (you can always tell them by the boots they seem to wear at all times regardless of if they are plodding around a city or climbing Ben Nevis); there is also a group of office workers with managers who I suspect are on a bonding course in the highlands.. As we relax and finish the wine we hardly notice that 'The Caledonian Express' has now pulled out of London and is flying back up the west coast main line - the line we came down only this morning. 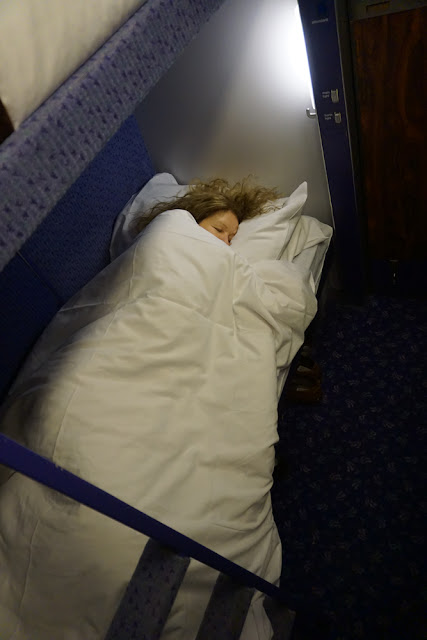