A quick break in Florida - Part 2

One thing I haven't mentioned yet is accommodation. We have stayed at Disney's All Stars a few  times before; it does what it says on the tin - comfortable accommodation, no frills and the air con works. No matter where we stay on Disney we ask for a quite zone away from the main pool and footfall area. 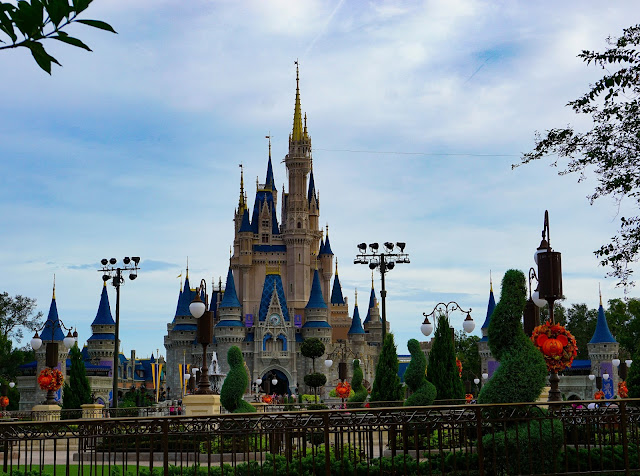 One great advantage  of the "All Star" resorts is the choice of buses you can use for that return from the parks each evening. If your room is in the right spot, its the same walk back using the Sports bus or the Music bus. We never had to wait for a bus as you're doubling your chance of a bus being available. 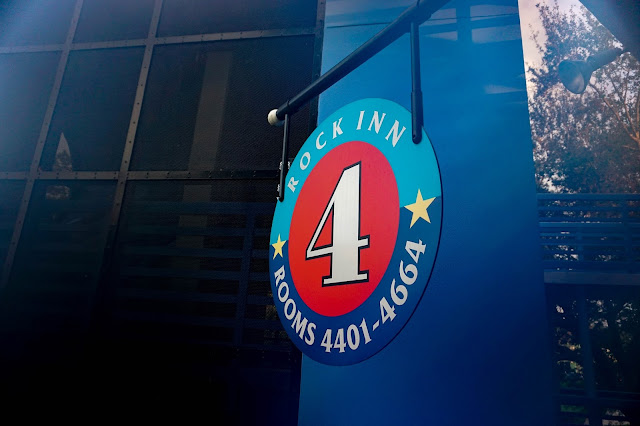 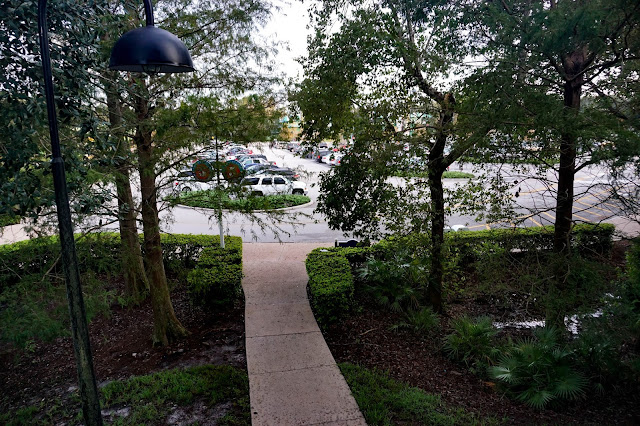 We chose Block 4 (Rock Inn) Music which happens to back on via a short path from the end staircase to the main car park at the rear - cross the car park at night and its the same length walk from Sports Transport Hub as it is from Musics back to your comfortable bed. We had breakfast at Intermission Food Court most mornings. Bizarrely if you're heading to an early entry (7am at MK today) the food hall does not open on time. Ah well, its not all bad - Cinnamon rolls on Main street it will have to be! 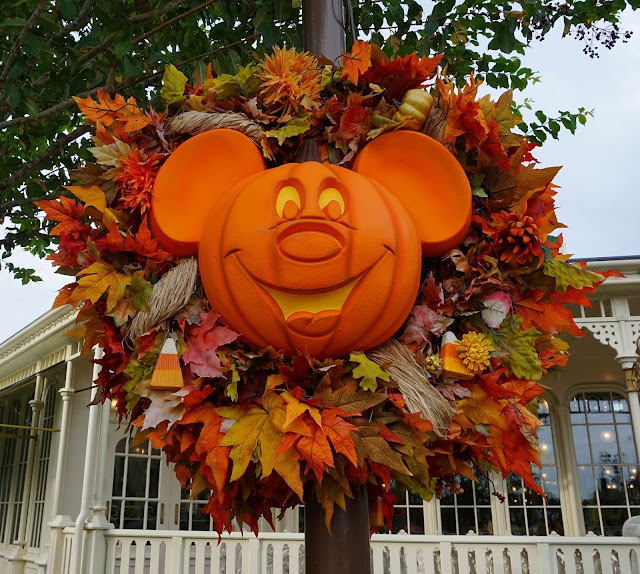 The plan today is to take advantage of Magic Kingdoms EE in the morning then head over to Studios for the afternoon where we already have all our Fast Passes in place. The gates are just opening as we arrive so heading straight for Fantasyland we walk on to the Seven Dwarfs Mine Train  - its pretty much the big queue generator here now (along with that old classic Peter Pan) so my advice would be to have a FP in place if you're staying in this park - or just get here early on an EE and do them back to back. I do like the ride - it's nicely themed and has some great animatronic pieces but a bit more BTM please. Unfortunately a couple of the set pieces are invisible - it was so humid and warm overnight, that at this time in the morning everything is dripping with condensation on the outside of the buildings so you cant see inside the glassed off areas. 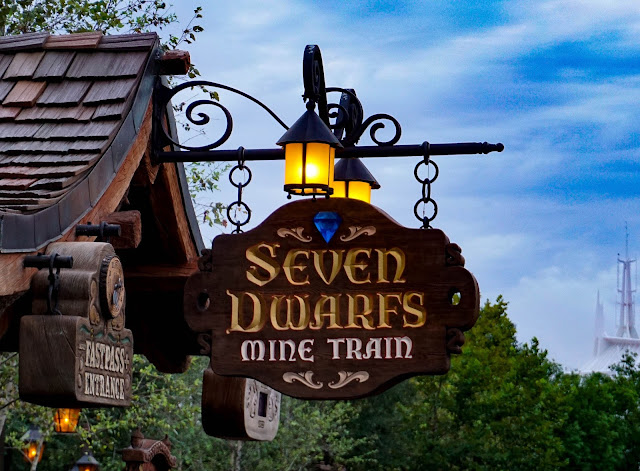 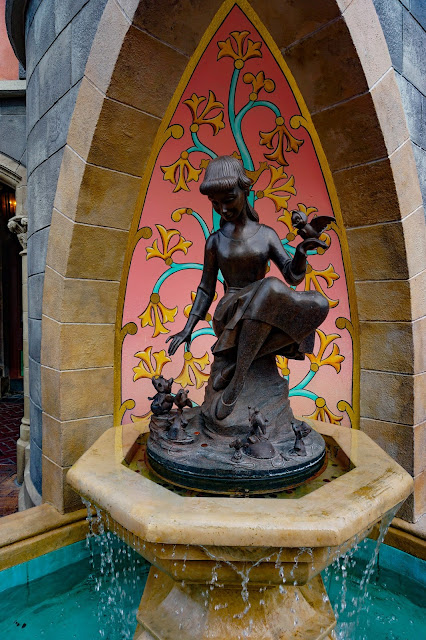 After Fantasyland we head over to Tomorrowland- there's still just a little time left before official opening time so that old classic Space Mountain is still a walk on. I cant wait though until DL Shanghai 'Tron' arrives - now that will be awesome and combined with Star Wars new land in the Studios should finally ease some of the pressure off Pandora (and no doubt apply it all somewhere else) - but just please give it a single rider option from day one. 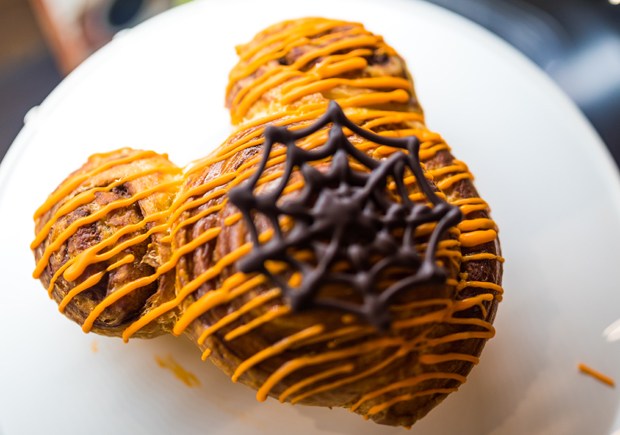 Time for a cinnamon Mickey Swirl (I remember when it was more a loaf  that combined with a couple of fish and a glass of wine would have been a biblical miracle) along with a side of egg and bacon croissants from the Main Street Bakery.  As it's Halloween season they seem to have decorated this classic with a rather  hallucinogenic looking orange icing and a (using the term loosely) 'chocolate' web.  But it still hits the spot washed down with coffee.  Thanks to Tom Bricker for the photo. 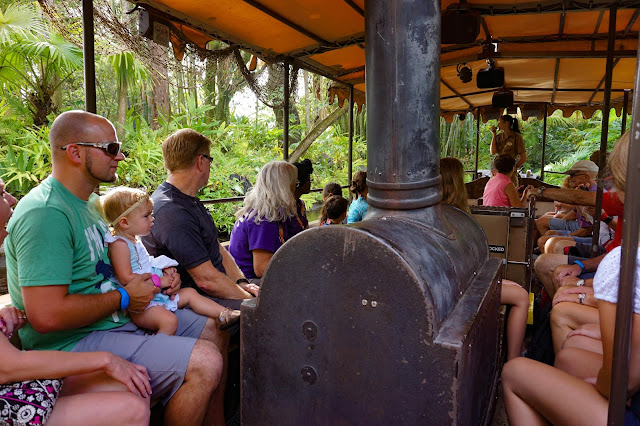 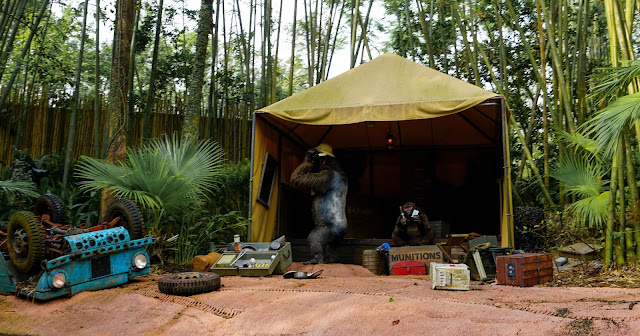 Two absolute must do classics for both of us has to be Haunted Mansion and  The Jungle Cruise. I think  Anaheim's H.M. with its bigger lobby area and that extra space and theming inside still has the edge on Florida. And Hong Kong still has the best J.C. - but they are still absolute must do attractions wherever in the 'World' you are. We have a great Floridian Captain on the JC today with a great dry (almost English) sense of humour - sure the jokes are the same (with a couple of fresh ones) but its all in the delivery - this girl nails it.


One thing we always forget to do whilst in Adventure land is partake in the worship of Dole - We keep reading how people  rave about this so off we go to try it. Its hot this morning - seriously hot, so it sounds just the thing. The Dole whip hits the spot. And no Jack didn't wear the t shirt to match. 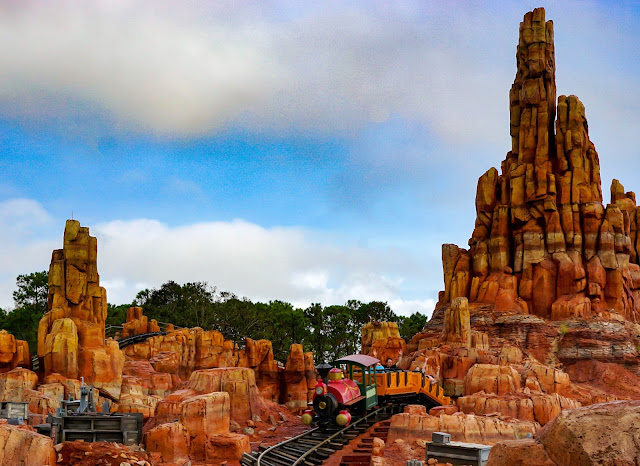 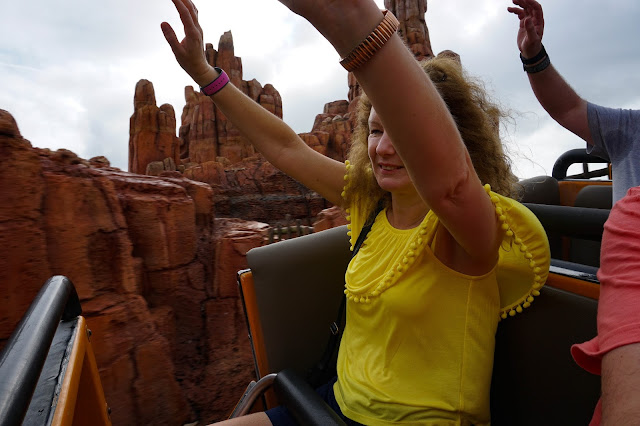 No visit is complete in the Magic Kingdom without a ride on BTM.  There's really no better experience after a dole whip than riding with your hands in the air whilst sliding across the carriage and crushing your loved ones. We recover with a nice sit down in the cool seats of Mickey's Philharmagic Theatre. This show is still one of my favourites - I am always fascinated how they slowly and seamlessly  increase the screen size till its almost wrap around and remove the entire proscenium - hiding it all again before the house lights come back on - simple Disney Magic. 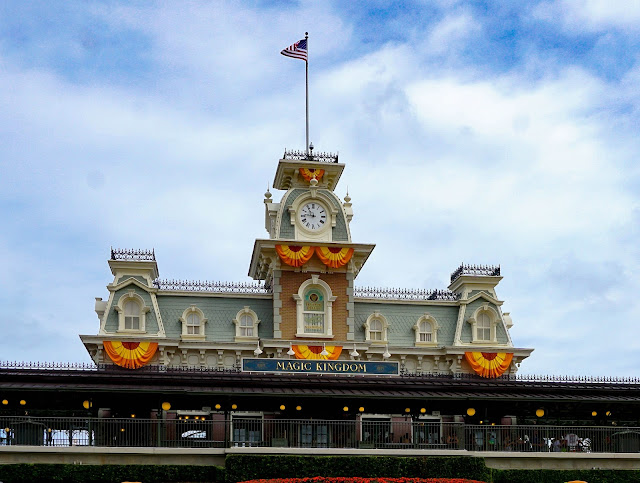 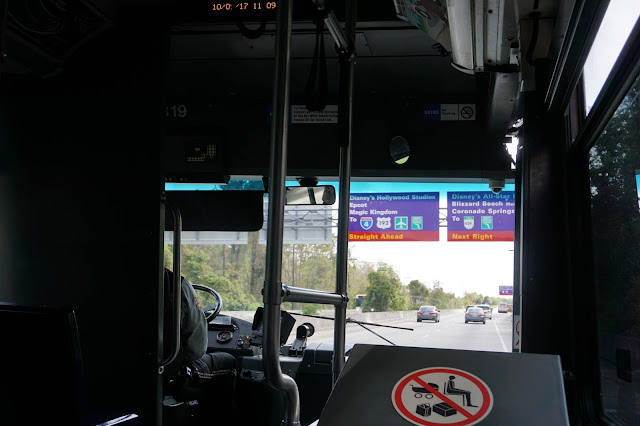 We had a lovely morning in the MK; we left around noon and the park was getting noticeably busier. We had decided to spend the afternoon in Studios and all ready have fast passes lined up for Tower of Terror, Midway Mania and Star Tours. Its a bit annoying that you cant add certain rides to your app if you already have one ride in that otherwise it would have been Aerosmith rather than Star Tours (which hardly ever has a line worth worrying about). In the end we chose ToT instead of the RnR coaster because the latter has a single rider option. 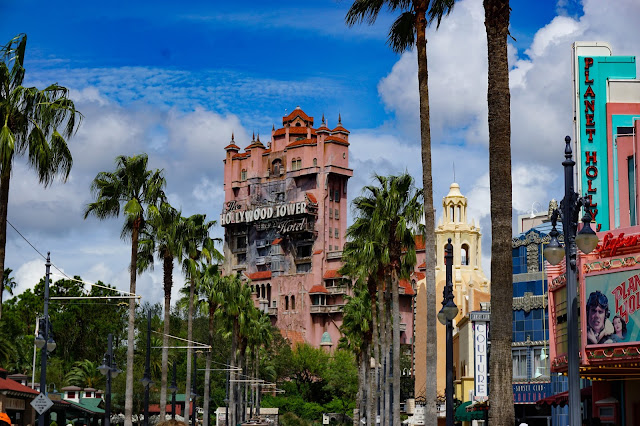 For Lunch we eat in the ABC Commissary where it has to be said the choices seem to have gone a little downhill. There always used to be a fish option here but (as in many QS restaurants) it seems to have disappeared - the Angus and the Chicken Club will have to do.  Never mind we'll just have to make up for it tonight as we are eating in the Swan and Dolphins Garden Grove as Friday night is Seafood night ( "Fish are friends not food" -  is not an option tonight) 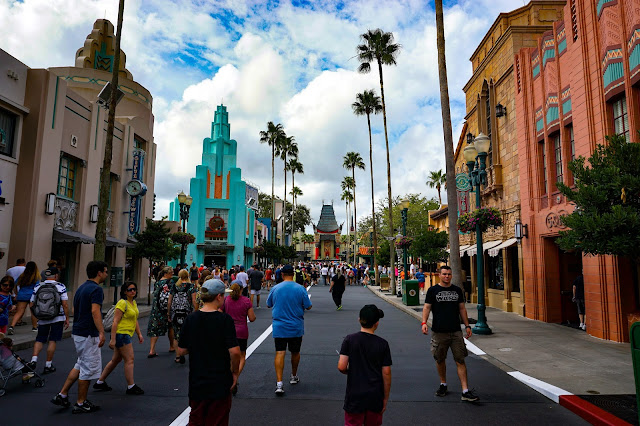 I forgot to mention that since our last visit the Mickey Hat has now gone from the central area (Hurray). What a difference it makes having the sight lines back to Grauman's  Chinese.
There is a lot of construction here at the moment (even the lake has been drained) as the park prepares the way for Star Wars Land and Toy Story Land. This also means quite a few things are out of action though - some I won't really miss - The Studio Tour Tram was always a bit short, fake and pointless and though I did enjoy the Car Stunt Show, there's only so many times you could put up with the cheesy scripted padding in between the routines.

What is a shame is the "Great Movie Ride" is now gone for ever. Yes it was also quaintly old and tired but it was always an original classic with its Animatronic sets and quite sophisticated (for the late  80s)  transport system. Disney Should set up a new site called the retro park and bring back all the lost classics - I'd buy a ticket; at least these old classics gave you a decent amount of ride time after standing in line :) 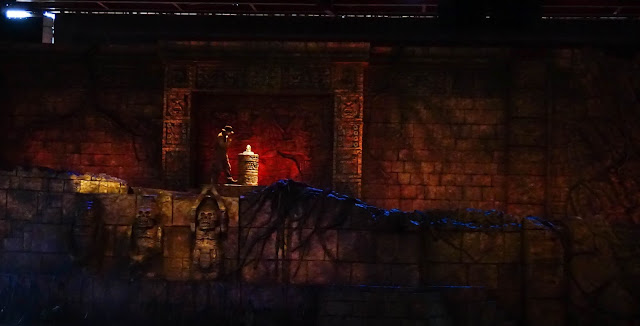 A downpour and lightning storm gives us a rather cut short version of Indiana Jones as they can't use any of their outdoor sets. I'm starting to suspect that  this year we are cursing the shows as the Lion King had an issue where the tumble monkeys couldn't continue with their segment due to technical issues (note - no tumble monkeys were harmed in this performance). Afterwards, the light is fantastic - a yellow post-storm light coats everything in a mysterious glow. 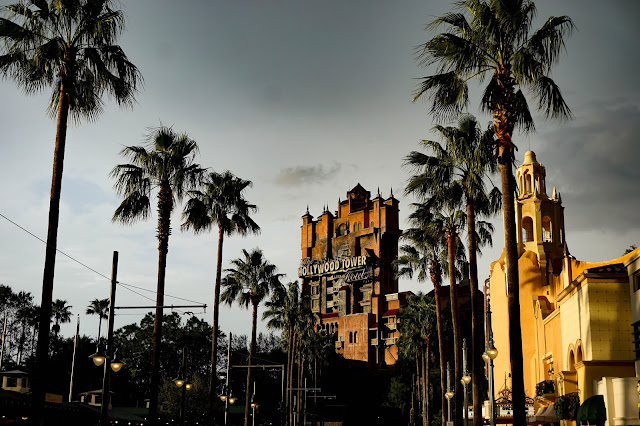 We take the Friendship boat to the Swan - we're a little early for dinner so stroll along the Boardwalk with a glass of wine and a craft beer. The storm has passed and it is (to put it politely)  sticky as hell - a great excuse for a cold beer - the light though is still ethereal, the buildings naturally illuminated. 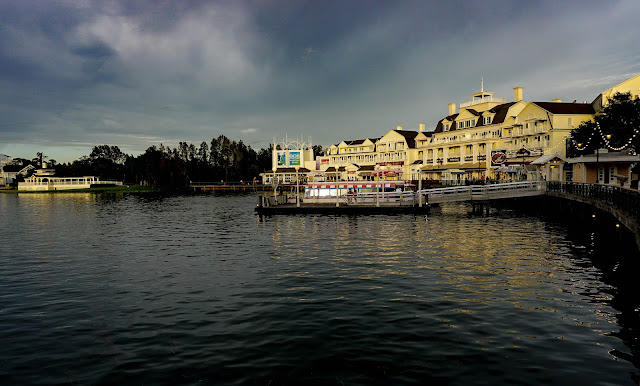 Friday night at the Garden Grove has become a tradition with us. A seafood buffet heaven of Alaskan Crab Legs, Lobster and perfect roast beef (PS dont forget your wallet as your mickey band won't pay here!). When we first started eating here we didn't actually realise it's a character dining experience - it does seem an odd place to have one as your buried deep up to your elbows ripping Alaskan crab legs and Lobster claws to pieces. How do Chip n Dale stay so clean!? With so many sticky kids. The beef carvery is also superb here - today its a melt in the mouth joint of slow cooked lower Sirloin  - this in my opinion is actually better than the (more expensive) prime rib cut that used to be the option, as its pretty much fat free cooked this way.


Quote of the day - On entering the seafood buffet a lady asks for the menu from the host  ' Wait, this is no good honey  ... I seriously do not  like seafood ! - I hate it '