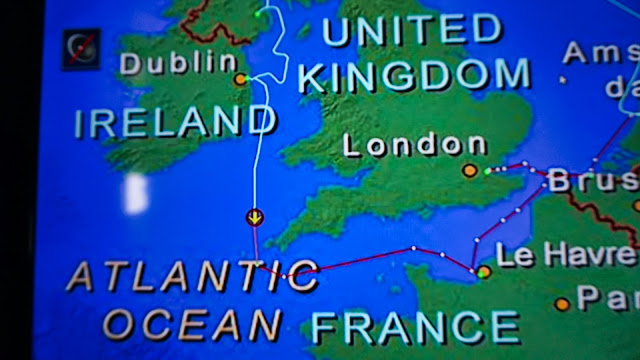 We leave Ireland just after midnight, the last of the taxis and limousines returning people from the night time experience of Temple Bar  just in time for our departure under a new Captain. Captain Paul left us today for his 6 month break. We are now under the master & command of Captain Giovanni. 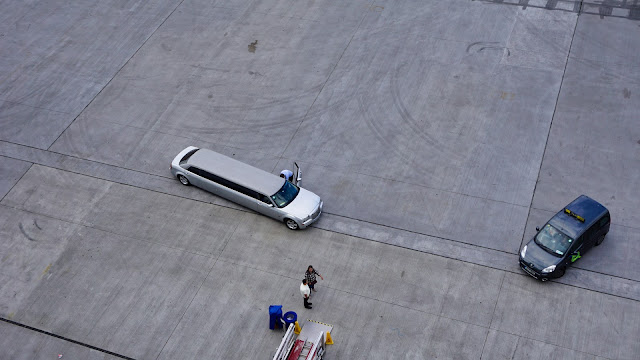 Sea days can be different depending on the circumstances. On cruises like this they are a welcome respite from the intensity of port adventures. Here in the English Channel as we pass between the Scilly Isles & Land's End Cornwall, the busy shipping lanes never give you that unique isolation one feels from a transatlantic crossing where even the vapor trails of a plane can be a rare site & an opportunity to not only relax but to appreciate first hand just how huge this planet really is. 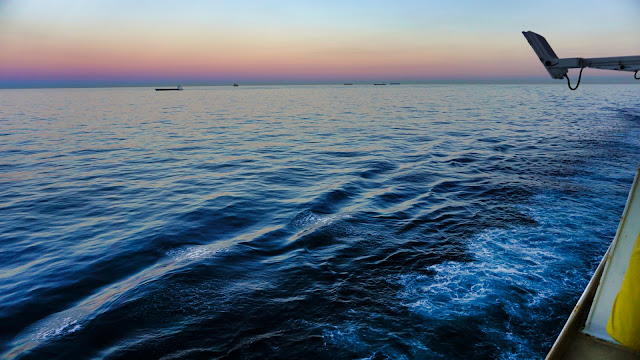 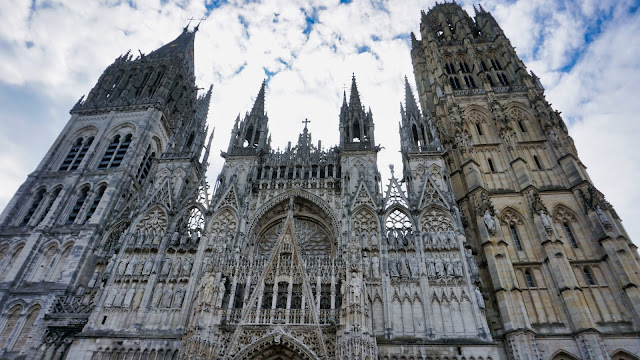 Most passengers visit Paris from Le Havre, however rather like London, if its a place you have seen many times there are other options. The D Day beaches being popular locations for the Americans and the beautiful medieval town of Rouen, capital of the Normandy region, being within easy reach for us. Originally we were going to make our own way from Le Havre to Rouen by train but we have some loyalty cabin credit and as we already have free drinks & dining upgrades we decide to take the ship's coach and guided walking tour. 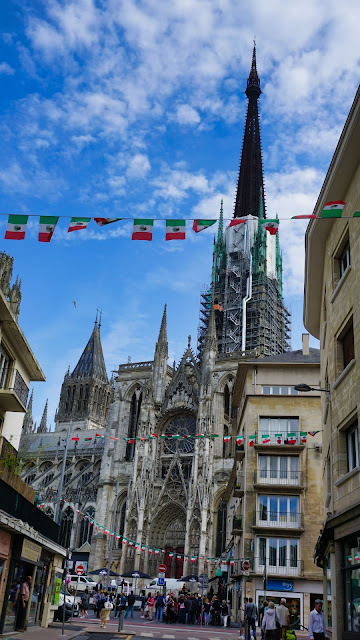 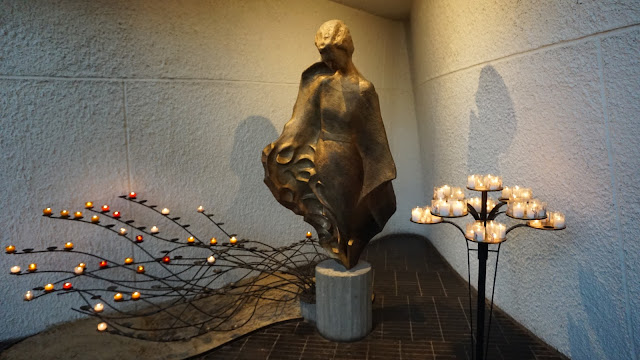 Rouen, a port city on the Seine, is a one hour drive, we pass the Ocean Stadium (currently hosting the womens world cup qualifiers) as we leave the port on the coach. It becomes warmer and hotter as we move inland from Le Havre. Rouen is known for Notre Dame Cathedral, with its Tour de Beurre at 75 m in height (butter tower) so named as it was financed by donations to the cathedral during Lent, not due to its creamy yellow colour! 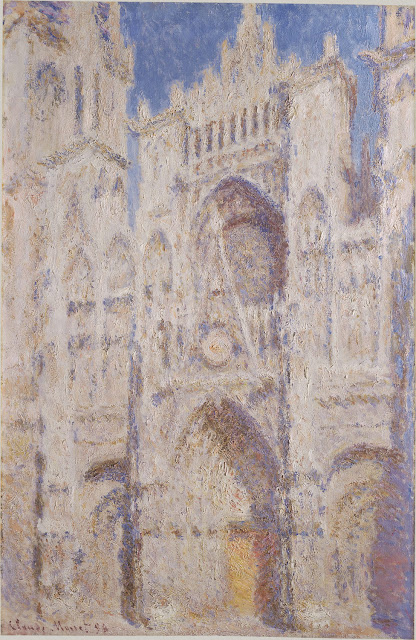 The cathedral's gothic façade (completed in the 16th century) was the subject of a series of over 30 paintings (painted at different times of day and seasons) by Claude Monet; our guide shows us how its possible to work out from the paintings from which building  he was viewing the cathedral - apparently one was a most excellent lingerie store (now the tourist office) but when the ladies started to complain about the scruffy artist in the corner he was asked to move on. 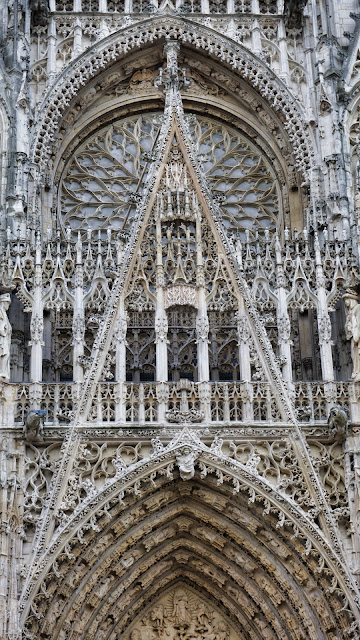 Rouen is also birthplace of Gustave Flaubert, author of 'Madame Bovary'. His inspiration for 'Three Tales' being  the stained glass windows of St. Julian below. 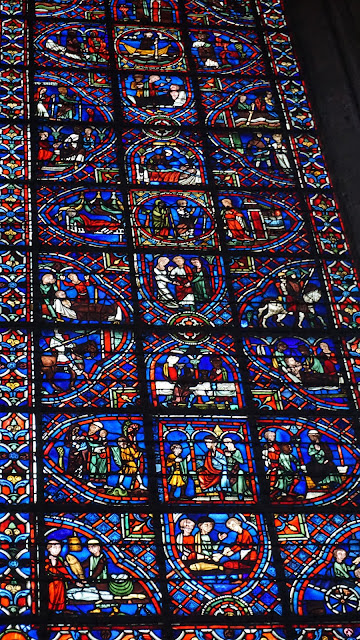 Its a very typical Gothic cathedral - you can instantly spot those architectural elements you see in so many other cathedrals of that time. The multi arched ribbed vaults supporting the roof and spreading the weight to the huge columns. 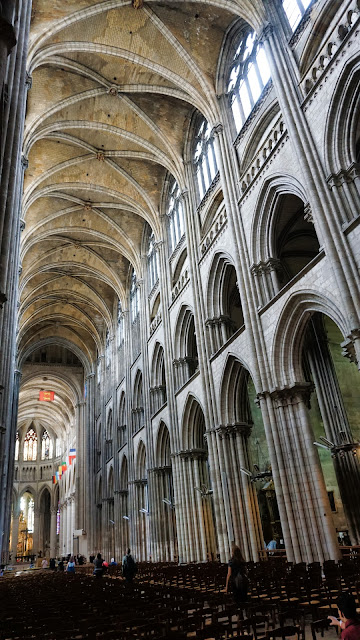 One thing that is missing is the traditional wooden quire, its quite unusual to be able too see down the entire length of the building. Normally the internal quire (or choir - its an architectural term although coincidentally it is normally where the singing choir would sit)  is placed after the transept (the crossing part) blocking the main altar from view. Perhaps its not the norm in France. 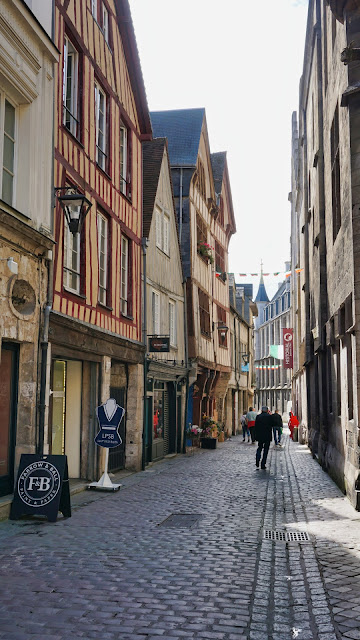 Rouen is made up of typical timber framed medieval buildings which are now occupied by designer outlets. You can even stock up on  Jack's favourite paint "Downpipe" at the Farrow & Ball paint shop in Rouen. 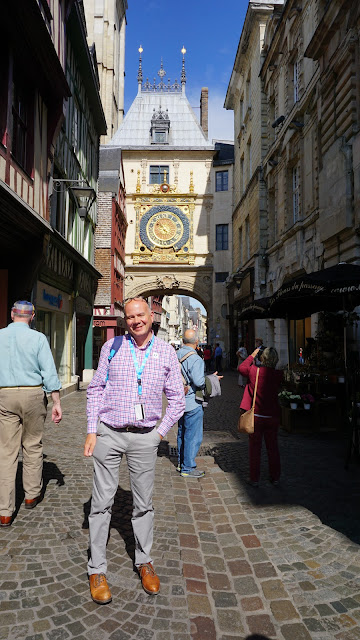 Why is it called Rue du Gros-Horloge, mm I wonder...could it be the enormous 14th century astronomical clock?

Joan of Arc, aged 18 defeated the English (who attempted to to conquer France during the 100 years war) by leading the French army at Orleans. But was burned at the stake only one year later by the English & their French collaborators in 1431. 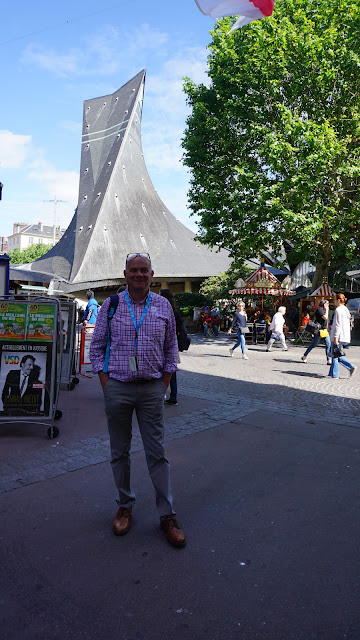 The Eglise Jeanne d'Arc was completed in 1979 at the site of her execution ( the old market square). The curving lines of the church represent the flames which consumed her. The exterior is 'Very Modern' , not for me but the inside is much more pleasing to the eye. 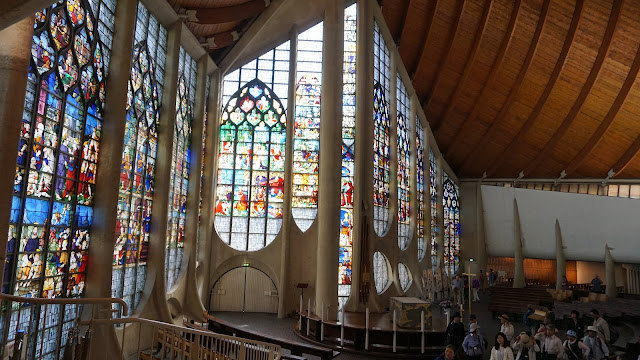 Curiously for a 1970's church, most of the stained glass is actually 16th century. The old church of St Vincent lay a few hundred yards away from this site and during the 2nd World War the French removed all of its stained glass windows and stored them underground in a safe location. It was a wise move as that church was completely destroyed during the war. 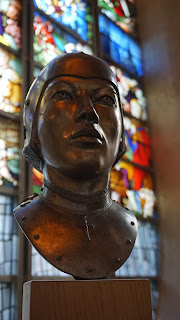 Our tour ends at the same market square, such an emotion evoking place and one the French still feel stirred by (our guide was obviously very moved telling the story). We pass a little free time shopping and talking french to the shop owners little poodle - "Hello good boy" gained no reaction at all but tails will wag and eyes meet for "Bonjour  bon chien" 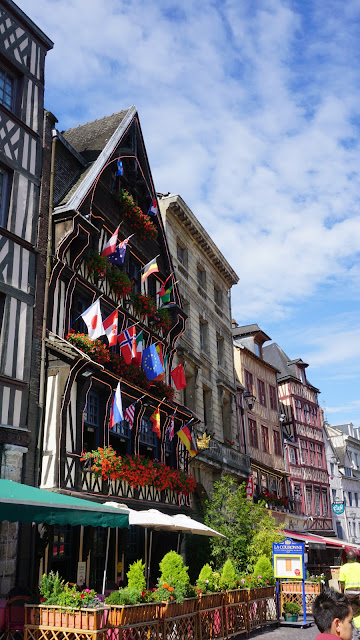 The market is full of wonderful food for eyes and mouths to water over and the whole area is filled with wonderful restaurants offering super fresh lobsters and assorted fruit-de-mare with crisp white wine, perfect for this hot sunny lunch time. But time does not allow on the ship's tour unfortunately. However we will  explore Le Havre this afternoon. We are planning to bring the car over sometime to tour around France and will definitely return to Rouen one day, such a fabulous historical city, so charming and beautifully preserved. And also to see its many museums. 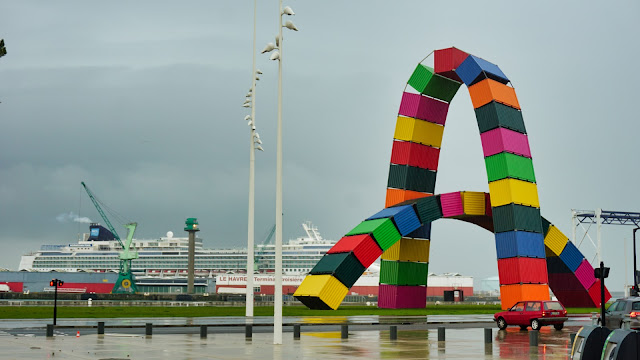 Stocked up on a lunch of Breads, local Camembert and of course wine we set out on foot to explore Le Havre. It doesn't matter which side of the English Channel you live on - the fact is the weather can change at the drop of a hat - and no sooner do we step outside than the heavens open. 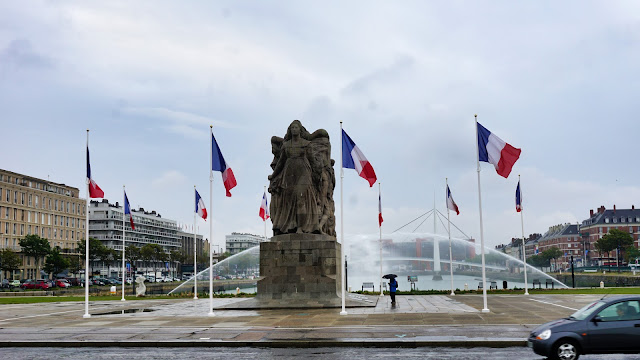 Le Havre is an almost fully rebuilt city as it was practically totally destroyed during the war by bombing raids. You can take a bus from the ships terminal which runs to the center of the city then to a new shopping centre that the old dockside warehouses have been converted into. Most of crew are heading to the shopping centre to stock up at Primark. We head into the city and take cover from the rain visiting the Natural History Museum - one of the few original mansions left in the city. 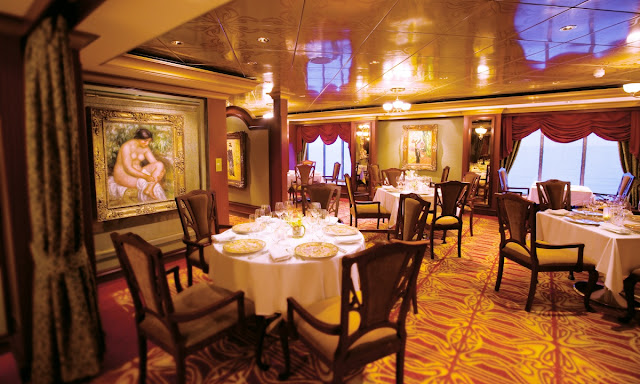 That evening we eat in Le Bistro again - as we are in France. Excellent again with Jack opting for the Dover Sole again and the rack of Lamb for myself. We leave France finally and set sail up the English Channel heading back to the South East of UK to sail down the Thames for London.