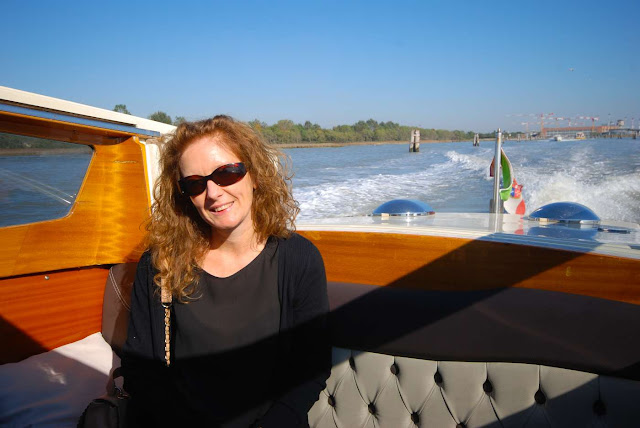 A few weeks after leaving the EPIC were heading to Venice for a short -ish cruise on the JADE. We arrive nice and early in Venice the day before sailing and have a lovely private teak taxi speed boat to take us directly to the hotel. There is simply no better way to arrive in Venice. 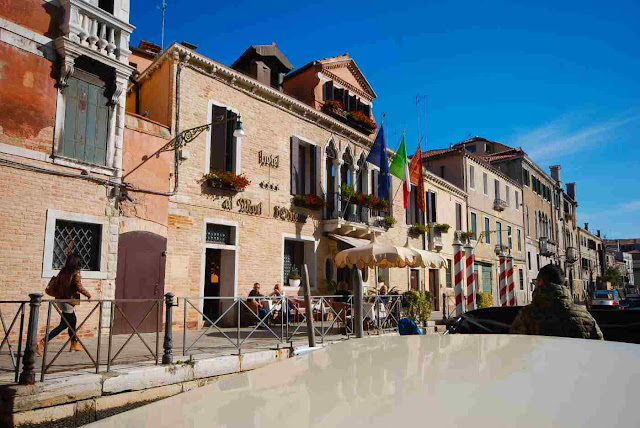 After much searching we had settled on the hotel AI Mori D'Oriente Hotel set on a quiet canal about 15mins from the station and 20mins from Rialto/St Marks. It was a beautiful hotel with lushly decorated rooms (we had a canal view suite) and wonderful service. Highly recommended 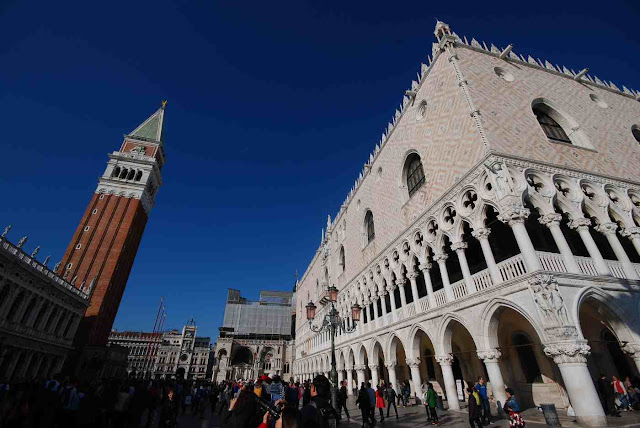 We strolled in the direction of St Marks (slowly as it was already getting warm) stopping for a seafood lunch midway. Venice was busy as usual  so it was good to just wander about slowly all day. 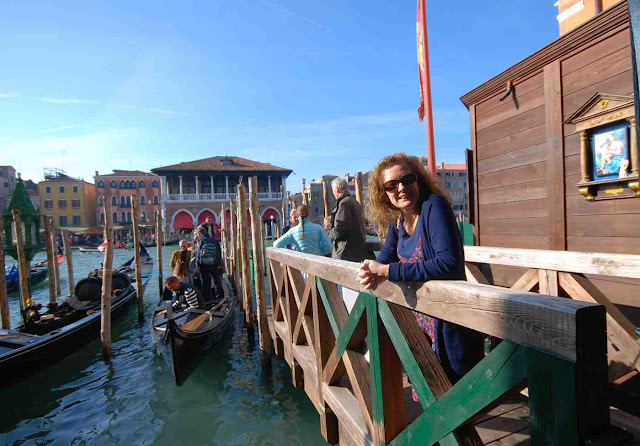 After a good nights sleep and a superb breakfast in the hotel we spent the following morning  soaking up more of Venice,  wandering around the markets and crossing the Grand Canal standing in a stand up Traghetto. Which is simply a 'Crossing'. 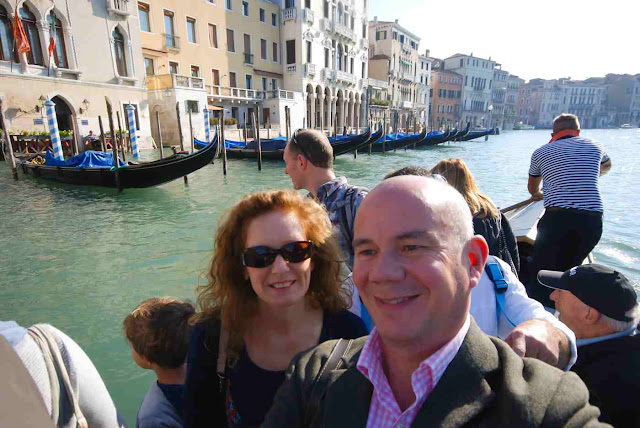 Then we returned to pick up our suitcases and headed towards the Railway Station to crossover to the people mover (I'm not sure if this serves any purpose whatsoever on reflection as it doesn't exactly drop you that near to the cruise terminal than if you walked). Think I would take a water taxi next time.

Checking in was efficient (we just had time for a coffee before they announced we could board). Our room was available immediately (aft mini suite). If I was to compare like for like with the EPIC I think in general I preferred EPIC's  cabin layout as you seemed to have much more wardrobe/closet space. However it was good to have a bath tub this time. 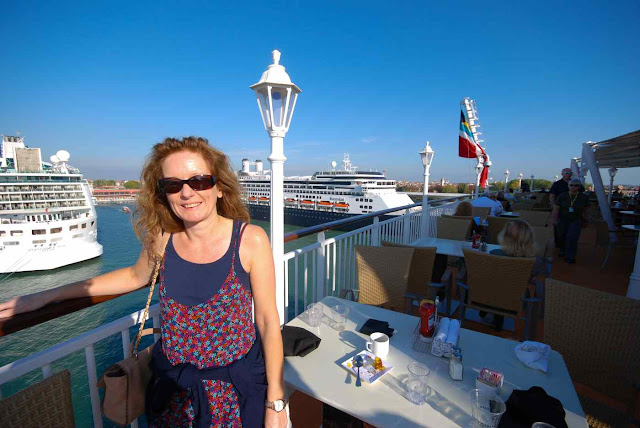 Then it was up to the "outside dining area" for lunch. Quite a few ships were in the terminal including NCLs "Spirit" , RCs "Serenade of the Seas",  HALs ms Rotterdam and an MSC ship. I still think HAL have the classier looking paintjob. 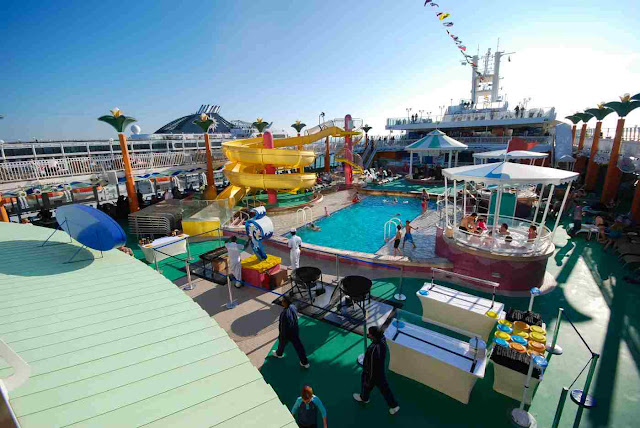 A quick look around to grab a sunbed and we passed the afternoon with a cpl of drinks (Our loyalty perks this time were Ultimate Dining Plan and Ultimate Beverage Pack = free booze!). Update: all the slides have gone by 2019 leaving a lovely clear pool area. 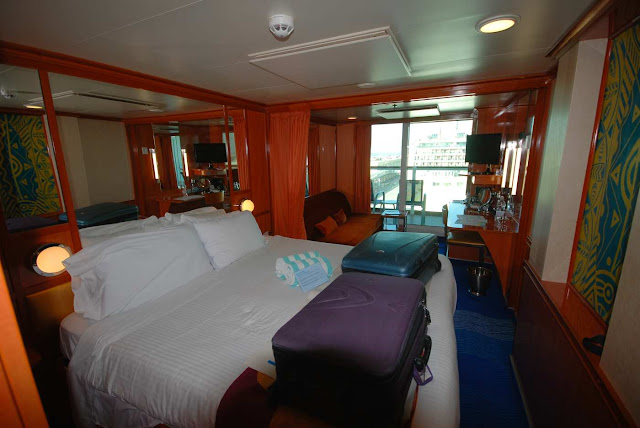 Back in the room Lloyd our steward introduced himself and he did a great job all week. Very impressed with the cleanliness and his tidying up after us. And the masses of mints were good too.

After a cpl of hours Serenade of the Seas departed . It was quite strange watching it slip beyond the Venice horizon. Then it was time for a very quick Muster demo. 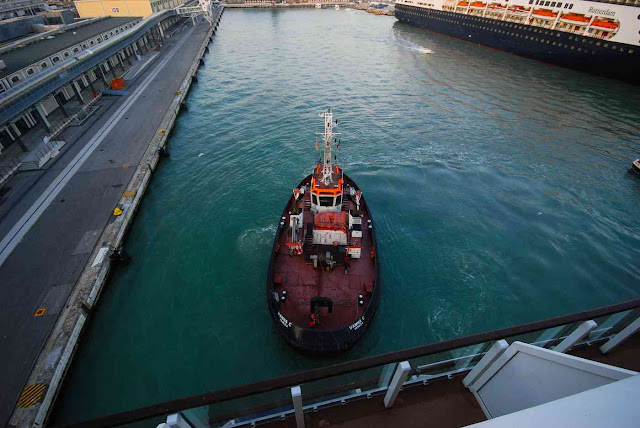 Tug boats then arrived and it was our turn. A well timed departure to see us departing just as the sun began to set. 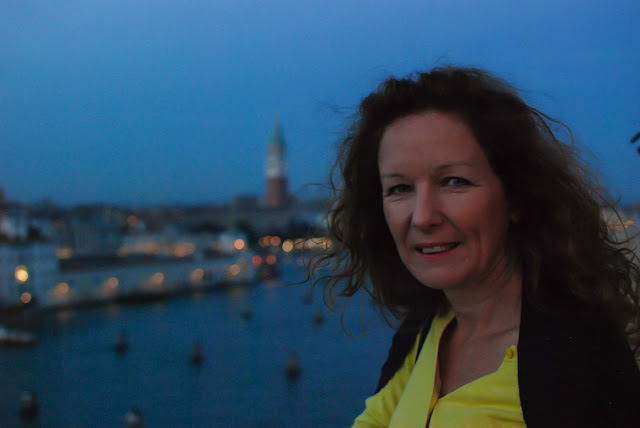 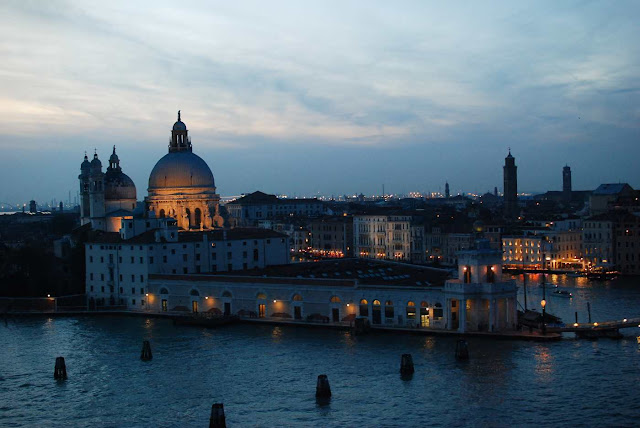 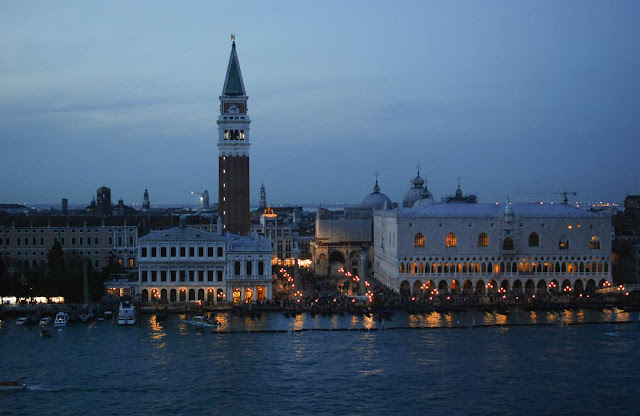 We ate that night in Cagney's- if I have one slight criticism  it would be that some variety could be added to these speciality restaurants menus between ships (or just have nightly specials). Still the food was excellent and the intimate restaurant really does make you feel like you have gone out for the night.

We had a sea day next and glorious weather to go with it. There's a good range of entertainment either from small bands around the pool area (all of which were good) or the usual evening show. Dinner that evening was in Le Bistro which was as excellent as usual.

We arrived into the port of Valletta and disembarked. With no trip booked we wanted to get to Medina and thought we may as well use the red bus, but we waited an hour as no buses turned up or were full, then got our money refunded. 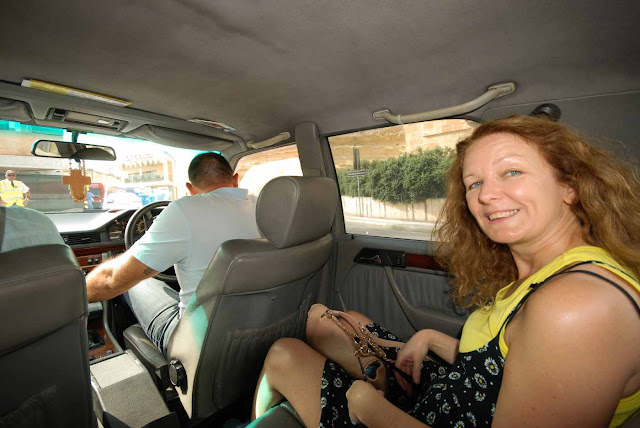 We then did what we should have done in the first place and hired a taxi driver for a few hours. Excellent value - he took us wherever we wanted to go and had suggestions of his own (we would have missed the Presidents Gardens otherwise, very tranquil)


Medina is a beautiful Medieval city oozing in history.  We strolled around the beautiful cobbled streets, visited the Cathedral and found a lovely little cafe for coffee up on the city walls. You soon realise as you take in the history why Malta has been such an important strategic island throughout the centuries. And all those influences are reflected in the architecture. Our driver took us around the hill first for us to take some photos but a bank of cloud decided to roll in at that time. In the sun it seems to glow as the light reflects of the local stone.


Next  Valletta - our driver getting us as close as possible to the Cathedral. Again Valletta surprised us with its grand buildings (especially in the government area where they had mixed new with old quite successfully). 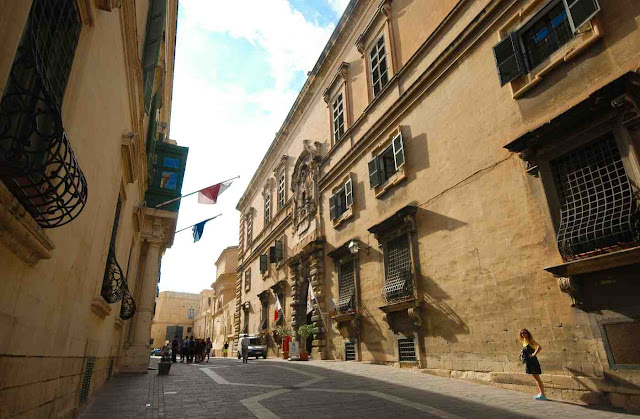 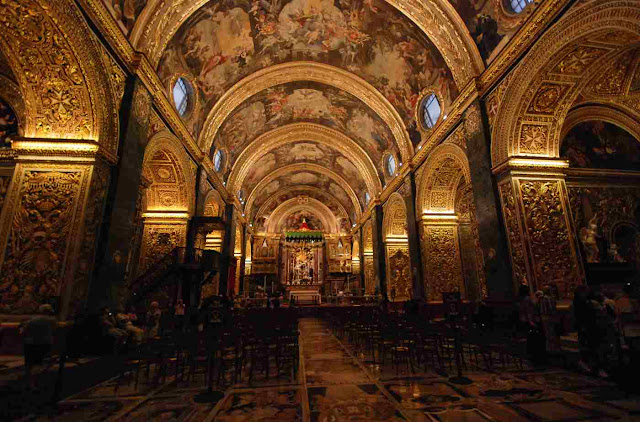 St Johns Cathedral is home to the Knights and Grand Masters of Malta and the (included) audio tour is beautiful and extremely interesting. Its also home to two of Caravaggio's Masterpieces "The beheading of St John the Baptist" and "St Jerome writing". 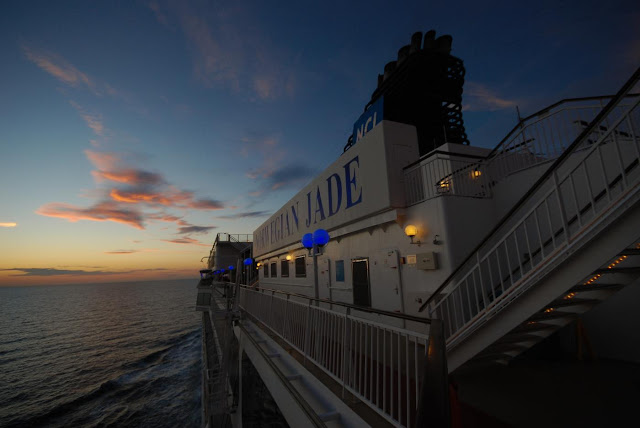 We departed Malta in the evening and had dinner in the Main Dining Room then up on deck for sunset, spectacular. 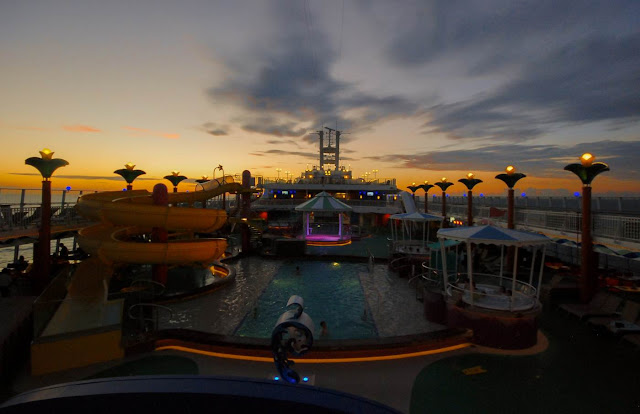 Another sea day followed and we were still lucky with the weather. Dinner was Cagneys again The following morning we have docked in Palma, Majorca where we caught the local bus from right outside the terminal for 1.5 Euro.  We enjoyed our time wandering around the old town and visiting the Cathedral Santa Maria.  After being in Barcelona a few weeks ago at the start of the Epic cruise I was quite surprised to see just how much of this cathedral is also under the influence of Gaudi's style. He was brought in to help re design and open up the original structure. 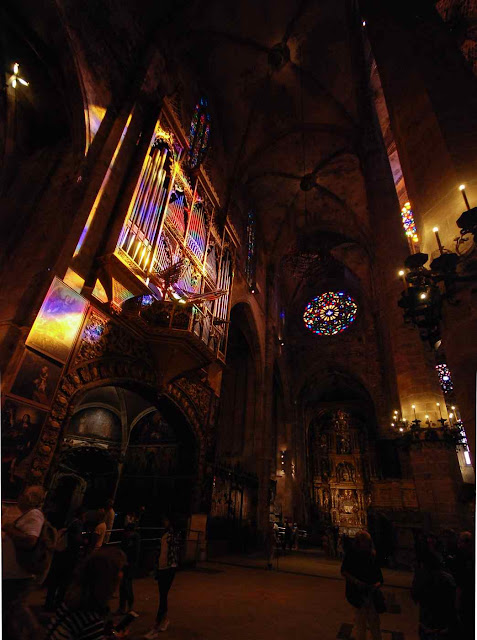 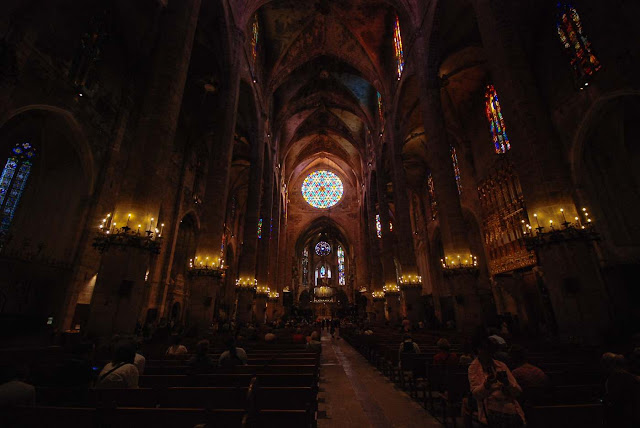 We sipped a lovely coffee and some sublime apple tart in a sunny little square watching life go by before returning to the ship.


That evening we took dinner in Le Bistro again and had the same comical waitress.What I did enjoy on the Jade were the music performers - the NZ led swing band and Ironics stand out.