Day 5 - Sicily
As the sun rises over the Mediterranean we sip coffee on the balcony and watch as the pilot boards and we slip slowly into the port of Palermo - Sicily. Its a warm morning already and after a shower we gather everything we need for the day and climb up the stairs to breakfast. Its warm enough now to eat outside which is always a pleasure - it can get a little to loud and crowded in the garden room. Its always fun watching the Epic dock, especially in the smaller ports (my favourite port was Cartegena last time we were on board). Its like delicately maneuvering a block of flats to spin on a penny; bow thrusters churning up the turquoise waters as the ship vibrates with the effort, spinning and gliding sideways into position seemingly effortlessly.

As a city Palermo has a lot to offer. You're docked only a block or so from the main streets and from the top deck of the Epic you can make out all the key buildings and judge how to get to them and set a route in your head. There's no real complex of port buildings, its just straight down the gangplank then a short walk along the dockside to the main road - where an Italian traffic policewoman blows her whistle with passion at the crazy Italian drivers and takes delight at shouting at anyone (old ladies included) who should even think about stopping too near the pedestrian crossing she is guarding.

Despite having a general idea where things were the streets of Palermo are so tightly packed it does become a little difficult to see the landmarks you had spotted from the ship. So trusting to instinct we zigzagged through the streets until it opened up into a beautiful sunny square and the fantastic renaissance Theatro Massimo (1897) materialises; the largest theatre in Italy (and the third largest opera house in Europe). 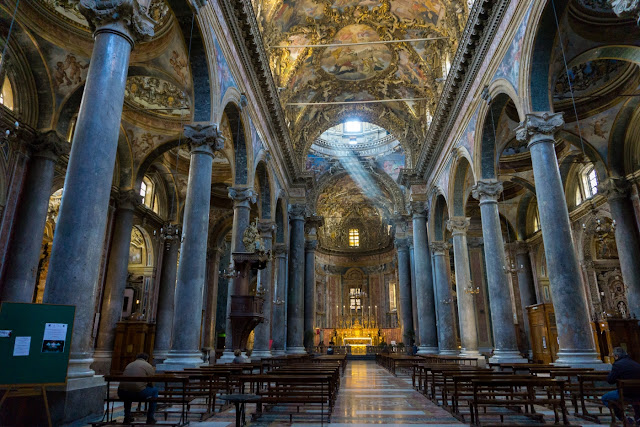 A short walk from the Massimo is the church of San Giuseppe dei Teatini. It lies on the crossroads of Piazza Vigliena an area that reminds me very much of Rome with its fountain, decorated buildings and the large decorative fountain of Pretoria across the road. Unfortunately the fountain of Pretoria is a little hard to view or photograph as its hard to get a view looking down at it and its totally surrounded by baroque style iron fencing. The church itself is quite unassuming from the outside but inside is a superb example of over the top Baroque architecture and decoration. The sunny day gave us beautiful rays of light from the Duomo.

Doubling back on ourselves we crossed to the Piazza S. Domenico where the alluring smell of fresh Italian coffee was too seductive to resist. A beautiful spot to rest for a while. The coffee was as good as it smelt and super cheap. From here we strolled back through the historical area. There are quite a few classical musical schools around this area and you could hear the opera singers practising from one building, violinists from others, pianist in the next.

We strolled back on board for lunch and take in the stunning mountain views that surround Palermo and finished Steven Kings 'Finders Keepers' (working out to be his best trilogy yet). It was hot, so hot I decided it was time to take a waterslide to cool off. Now two things need to be explained before people say 'what is he doing'. One - the decks were so hot I kept my sandals on to walk over to the slides. Two - I forgot I had my sunglasses on. I was thinking I would simply hand them all over to Jack but she stopped halfway up the staircase to take the photo - so hence the reason why there's a mad Englishman going down the slide with his shoes and sunglasses on. PS I couldn't see a thing as the sunglasses steamed up from the humidity in the slides. 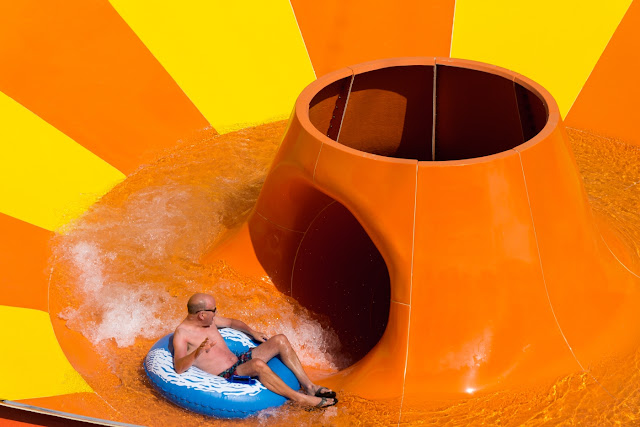 Dinner that evening was back to Le Bistro where Vanessa 'with a V'  (she said this every time and I'm still trying to work out what other spelling of Vanessa she could have thought we would mistake it for) and Sheila were our servers again. I think Jackie had the scallop main course that I had had previously and I had the lamb. 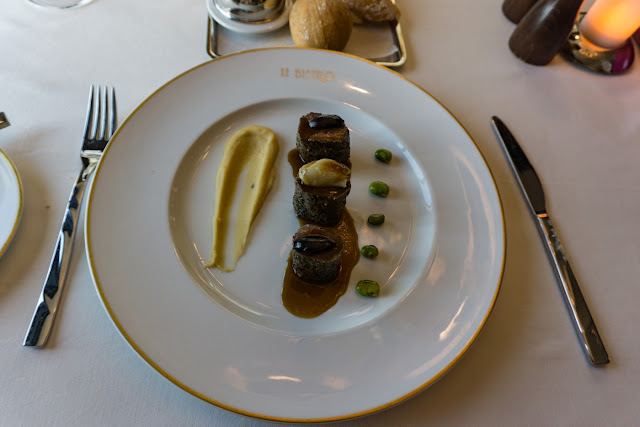 Again it will come as no surprise that we spent the evening back in the Cavern Club - though it was a quick set by the Starlights cut short by the fact none of their monitors were working and they couldn't hear themselves. Unfortunately the Cavern's tech guy seemed to have disappeared and despite various attempts to fix it they had to stop part way through.

The next is another sea day however as soon as we awoke we realised it was to be no ordinary sea day.