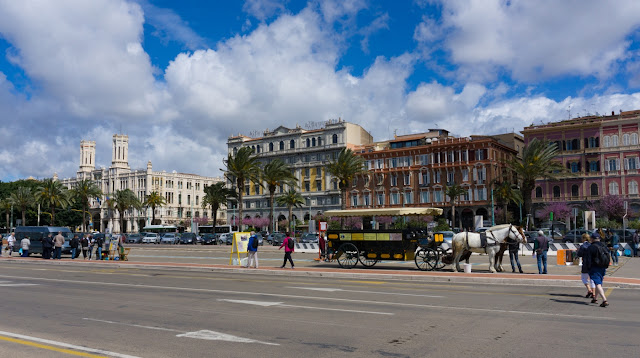 I open the curtains in the morning, we're approaching the port of Cagliari, Sardinia. Here a free shuttle is available to take you to the impressive and pretty sea front of the city. The usual assortment of horse drawn carriages and on-off buses etc was available to use but its not that big a city and walk-able if a little steep in places - ideal to burn off those cruise calories. As usual at Italy's ancient sites there's a fair amount of restoration taking place (usually wherever you want to take a photograph) 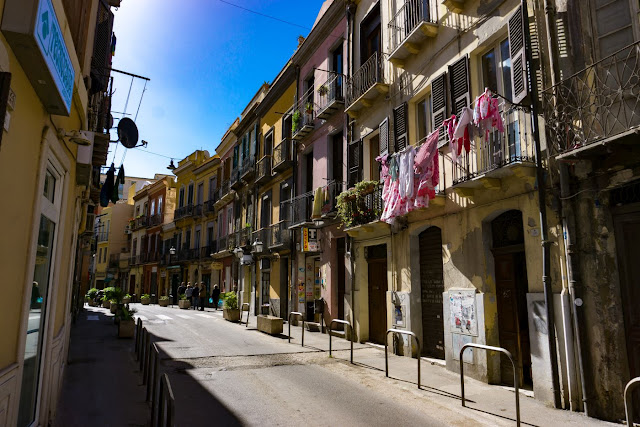 We walked through lots of narrow streets  to the highest point in Castello then followed the medieval wall from the old prison to the amphitheater (only a very small part remains of the original as the stone was taken to build with, but a modern steel seating area that follows the original site allows it to still be used as an outside  music and theatre venue) then worked our way back taking in the cathedral and various other churches tucked away in the tiny streets. 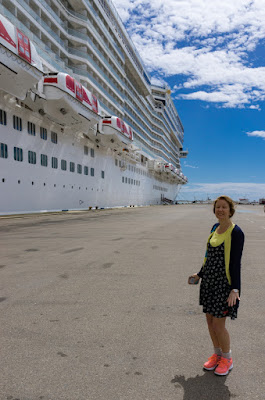 We were back on board  and hungry  for lunch time which turned out to be perfect timing. A series of showers and sharp winds rolled in drenching everything and making it look like a summers day in Lancashire. Luckily it passed as quickly as it came but it left its mark - causing a  a window in the garden room buffet to shatter.
We found a nice spot on the top deck to pass away the rest of the afternoon sipping Blue Moon (my NCL "go to" beer) and Campari and soda (long glass, easy on the ice, and slice of orange) - life is good! Sardinia is spectacular. An architecturally stunning town with the magnificent mountains for backdrop, we loved it and continued to admire the views surrounding the ship all afternoon. 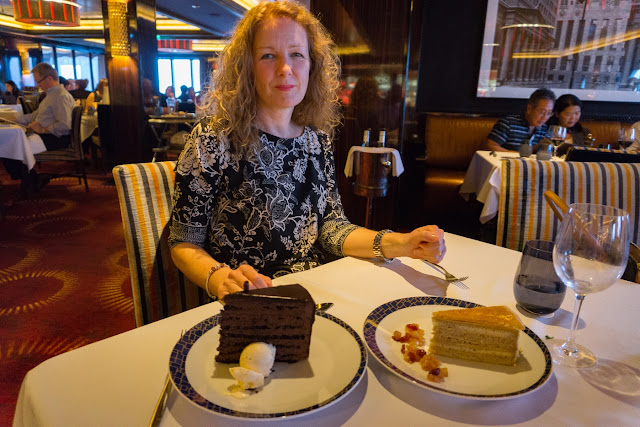 Tonight its Cagney's - our second restaurant of choice with NCL. Again its good to see some changes have been made to the menu though here there is obviously  still a big emphasis and bias towards meat. Dessert as you can see is still as obscene as ever as are the steak sizes ;)
We had a great young Estonian waiter (Nikolai) who hilariously gave us a  rather too visual graphic description (complete with mimes and hand gestures) of how he coped with his first transatlantic crossing. I was about to partake in my first piece of perfectly cooked rib eye!! But he was entertaining and a real character. 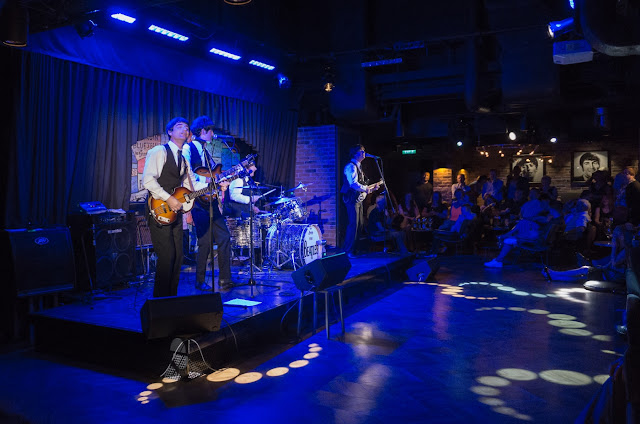 Back to the Cavern for the night and after a short set from the Starlights we finally have the Beatles back on stage. Paul as you can see has obviously spent his holidays playing Noel Gallagher in an Oasis cover band ;) For a tribute band the Beatles are superb (as ever) - it really does help having them in such a small (loud) venue rather than in the big theatre. Yes, you have to turn up early and yes it can get crowded - but it all just adds to the atmosphere 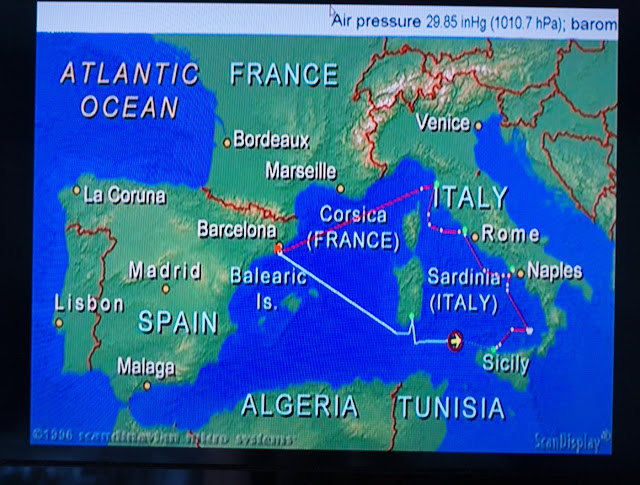 We awake somewhere between Sardinia and Sicily. The weather is cool but from the balcony  I can see blue sky on the horizon. Coffee in the room to feel alive and then a high speed climb of the stairs from deck 8 to deck 15 to get us in peak condition to tackle breakfast.

By mid afternoon its sunny and hot - Jack decides the time has arrived for her to hit the water-slides. Only the Epic can have a water-slide that resembles a toilet bowl but it is fun. Top tip - use a junior sized ring, you go down faster.

Dinner tonight sees us returning to the main dining room  and its very good again  - and certainly not as rushed as it was on the Jade.
There has been a lot of shuffling about of shows - the main attraction 'Priscilla Queen of the Desert' has been moved about so we scrapped our bookings and re booked for the end of the cruise. After dinner its back to the Cavern where the bar girl now knows my order as soon as I approach; the Beatles are  on tonight which seems to have surprised them as they thought their next show was later in the week!