Awake to the phone ringing gently next to my head. Is it that time already. The display says "Pantry Midship Staircase" - Gemma is as bright and breezy as ever "Good Morning Sir - your breakfast is on its way". (Note to self - we need a Gemma when we get home). This morning we also have milk to go with the cereal. 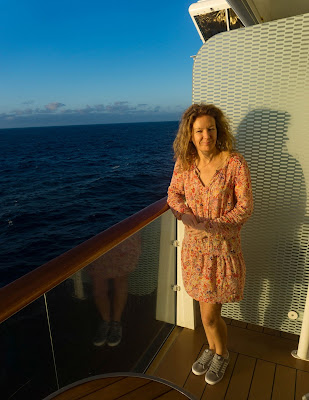 This morning we have awoken to what could be considered for the North Atlantic in November almost tropical temperatures. The sun is high and hot the winds are warm from the SE. The Captain gives us his usual 10.00 "Woyage update" - We have now passed the halfway point from Southampton (1800 miles travelled and 1200 to go before Boston at an average of 20knots [25mph]) The warm weather is the result of a tropical system blown or dragged kicking and screaming against its will north and will be with us most of the day. The bad news is its also dragging a storm behind it which we will clip later tonight, but there's more good news -  we will pass it in the night and get more sun tomorrow. Our port cabin faces directly south for the entire journey which is a stroke of luck really as we only booked a guaranteed balcony. After doing the obligatory morning walk around all the top decks we settle into a cpl of sunbeds.

Whilst not so much a worry one of the things in the back of my mind when we booked this was would we cope with so many sea days (and sea days for that matter where you see nothing but endless ocean; no land, not even another ship to break the horizon). I have to say that so far we haven't even given it a second thought - you quickly settle into the routine of the ship and just relax into its days with ease no matter what the weather. Theres no clock watching hoping the hours go by till the next "event" - just pure bliss, not a care in the world; a full DVD set of "Breaking Bad" has  yet to be broken into. 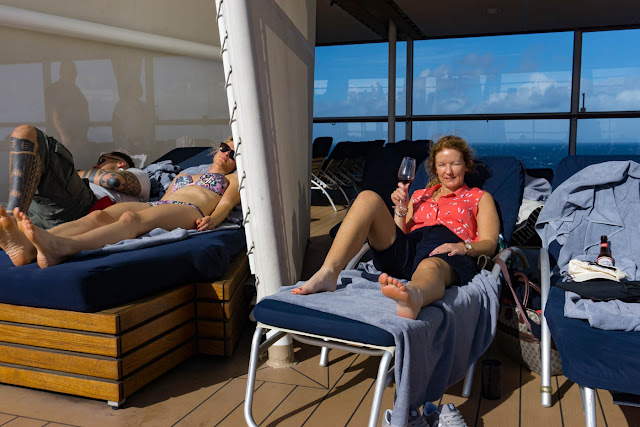 Its warm enough by lunch time to enjoy an ice cold beer and a big juicy burger by the pool - Jack sticks with red wine and some succulent turkey breast and we spend the rest of the afternoon outside by the pool. Later, just as the Captain had described, the wind begins to pick up, the sky starts to become grey and the sea turns from an icy blue colour to an inky black. The rain never appears though and even though the swell has definitely increased it is nothing like that which we saw on the 2nd night. 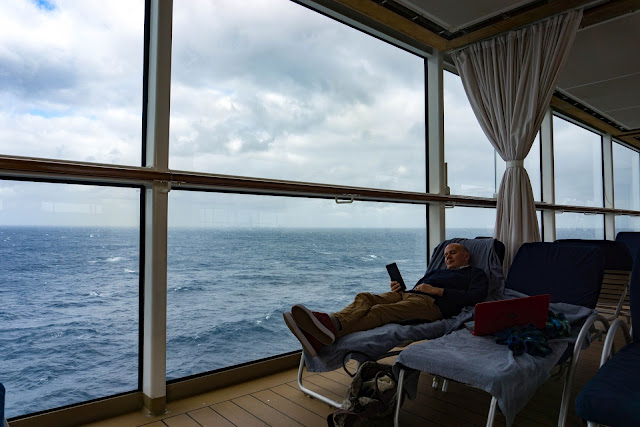 Tonight we are dining in Qsine, a trendy little restaurant where the food is ordered tapas style on ipads and brought to you in several courses that are presented to the table in a variety of ways. Each dish is supposed to represent a different  areas cuisine  We order lollipop sushi (Japan), a goats cheese salad (New Zealand - bit of  a stretch), Lobster escargot (France), Lava Crab (Alaska) and a mix of curries (have a guess); dessert was tombstone chocolate and something tiny cheescake with coffees and strawberry fields for ever with creme brulee eggs. Have a lovely chat with our waitress Amy who speaks English, Spanish, Japanese, a little Cantonese and the 3 dialects of her home country Indonesia, quite why she isn't working as a translator for the United Nations is a mystery.

We do thoroughly  enjoy our visit to Qsine however i'll leave my final comments until after our second visit later in the cruise.
I do need to start taking an afternoon nap (comment obviously refers to D -  J could dance till morning) from now on as I'm exhausted after dinner so after a little air on the decks (weirdly the starboard promenade deck has a slight drizzle whilst the port side seems to have a micro climate all of its own and is engulfed in a downpour and closed - it's probably the spray from the sea hitting that side) 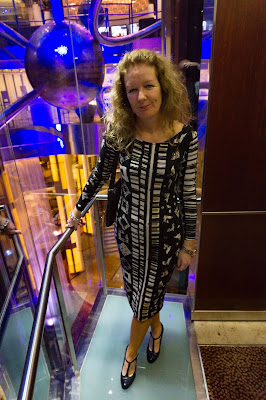 Later that night (or earlier the following morning - time becomes rather blurred on a TA) the sky totally clears and the stars  shine so brightly they seem to illuminate the sea - we fall asleep counting stars which sounds lovely and romantic if it wasn't for my snoring.