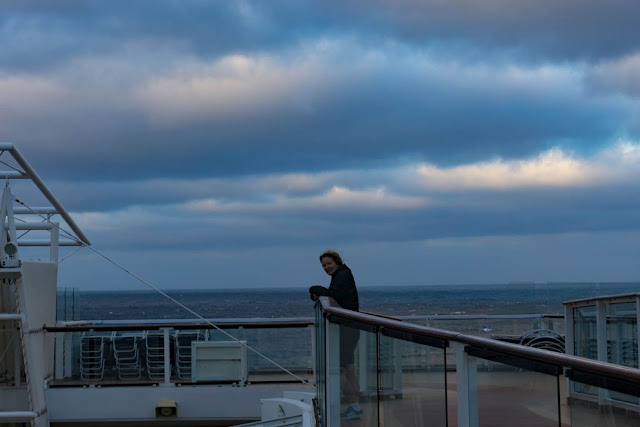 The spirits must be unhappy as they prepare for tonight's party as the sea did not calm down at all during the night. We both managed to sleep through it though so its still smoother than the overnight service on Amtrak (think of a wild mouse rollercoaster on a top bunk whilst someone blasts  an air horn in you ear all night if you want to recreate the City of New Orleans Service).

At 10am Captain Michael gives us his update that we should clear the storm by tonight - all the top decks are still open but the Captain does announce that hes closing off the lower promenade deck for safety reason (this deck is technically the lifeboat deck but we'll let it pass - I'm sure they have a plan).

Dan heads out for emergency cabin supplies of hot muffins, butter and marmalade then we head out to the upper decks; It has to be pointed out that as we type this up we are  sat outside on deck 14 lying in a giant hammock which swings around with the motion of the ship like a fairground ride so all typos are not my fault.


Lunch time we decide to dine in the MDR.. Its lower and in a more "stable" position and the thought of serving yourself at the buffets then playing dodge the guests with hot food as the floor drops from under your feet doesn't seem that relaxing. Jack orders all the starters on the menu instead of a main which confuses the waiters sense of order. By coincidence her last starter (a sml garden salad) happens to be served at the same time as my main course causing the busboy to ask why Madam has started her diet so early on the cruise. 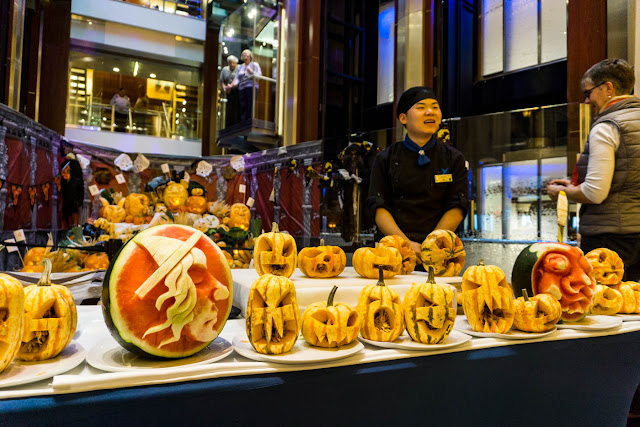 One of the chefs from Sushi on 5 is spending the afternoon in the main Atrium doing a pumpkin carving demo. Its good to see they have found something for the Sushi staff to do as the restaurant doesnt seem to have had a soul in it since we set off. Either Celebrity found themselves with an excess of tuna and wasabi to get rid of or someone seriously got the figures wrong when they introduced this as an a la carte priced restaurant - I'm thinking a big sale later on in this cruise; either that or the entire ships service staff have to eat Sushi every night. 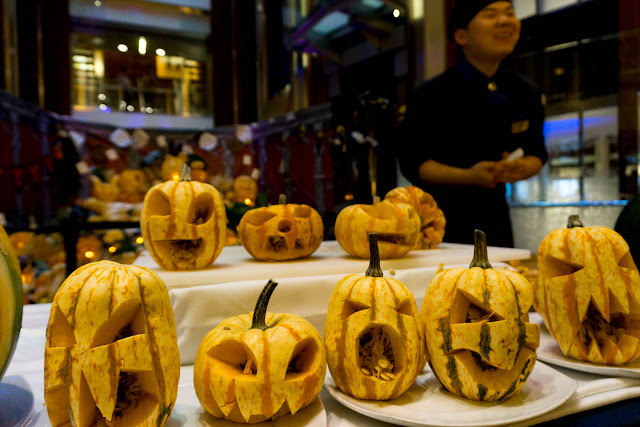 We have now moved into the Solarium indoor pool area and relax on a sunbed in the warm greenhouse. The pool is still full of water - though the net has just been installed. If you take a sunbed close to the waters edge  you can play a soak or dry version of  Russian roulette, as the pool has become a giant tidal wave of motion throwing water about with the motion of the ship. The clocks have gone back twice now since we left Southampton but as we travel further into the west our sunsets are getting later from around 5pm when we left to 7pm tonight (something to do with latitiude and all that "stuff" ). 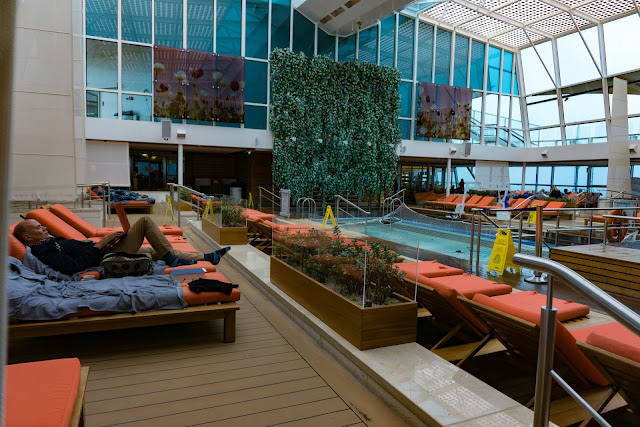 The swell does seem to be lessening a little so we decide to pay a visit to the Tuscan Grill restaurant with its superb outlook (when it's daylight) through the picture windows at the rear. We did an earlier stability check to make sure the rear end of the ship wasn't bouncing around like a big dipper so hopefully it should be fine when we eat there. 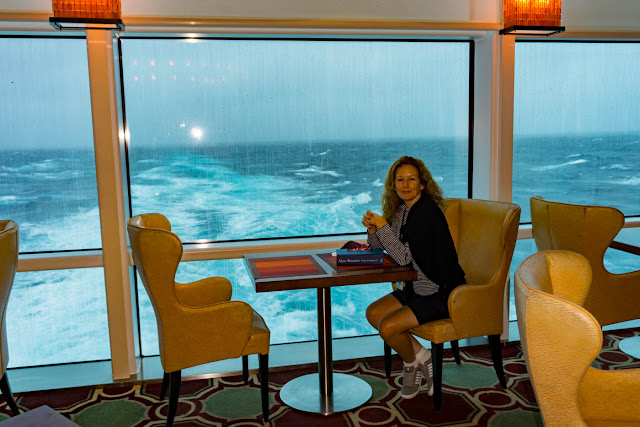 Oscar is our bouncy exuberant waiter regardless of what the sea is doing and after hes done a little gardening with some freshly grown micro herbs and a dish of olive oil we order. Calamari to start for Dan and Crab Cake for Jack. The Calamari was excellent , the crab cake had a rather odd texture and lacked any deep flavour (probably not enough brown meat in the mix). We then shared a super thin flat bread - gorgeous.. For the main course Dan had the beef skirt which was tender, full of flavour but could have fed an entire table of four. Jackie had the sea bass - nicely cooked, though the papillote method of cooking didn't seem to have infused the flavours in the way you would have expected.  Desserts were pistachio creme brulee and zabaglione washed down with a glass of Limoncello.

As we left we passed Qsine where we will dine in a cpl of days. The lovely Maitre d' invited us inside to check out how it worked which was a good introduction. Sounds and looks very interesting. With unplanned but great timing as we sit down in the Ensemble lounge for an aperitif Jessica and Luke, the ships acoustic Duo, were just setting up. Jessica has a lovely soft voice and their acoustic interpretations of songs are perfect for the lounge's atmosphere. There are some fantastic Halloween outfits being flaunted around tonight - some are so professional looking we wonder how on earth they found the space to pack. 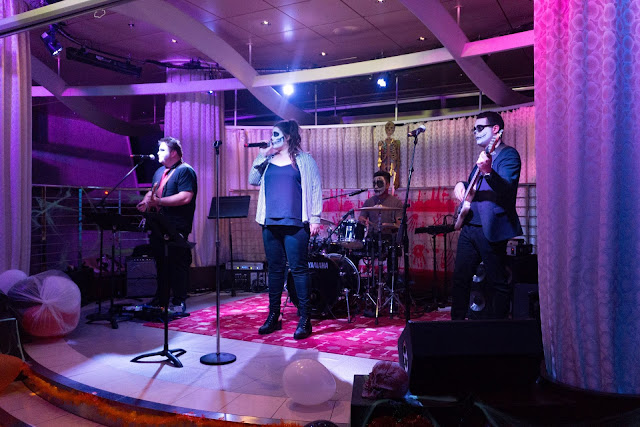 We climb up to the crows nest club (which is called Sky Lounge on the Eclipse) for the Halloween party where ghosts and ghouls from every tomb are closing in to p'aartey. After we all attempt a rather ramshackle "Thriller" dance routine "The Trends" step in to do an excellent live set. 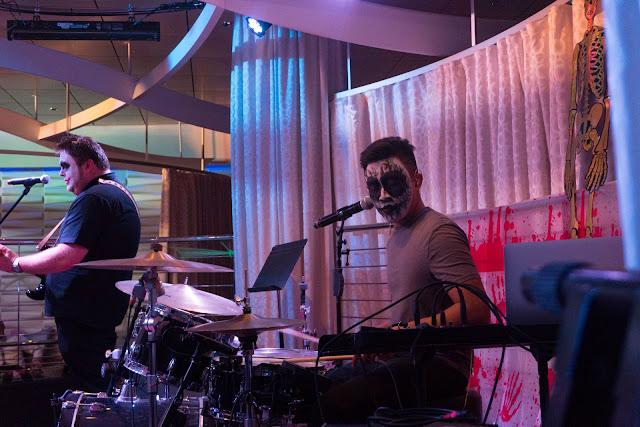 As they go for a break the DJ promptly empties the dancefloor with Dexys Midnight Runners.