Alarm awakes us at 7.30 but it's actually 6.30 (clocks went back last night as British Summer Time ends) so we doze. Up and showered for a lovely and soft eggs benedict in the MDR then we head to a meet up for Cruise Critics at 9.30. Seems like we'll never find anyone, then Sue from Exeter appears for our Boston trip, and then we meet up with Pam from Nova Scotia to talk about the Bermuda tour shes arranged.

The Captain (Michael Sympouras from Pireaus) announces that we have just now entered the North Atlantic and are currently South of Ireland -its pleasant outside, warm and sunny with a nice breeze washing over - a gentle swell lifts the ship in an hypnotic fashion but apart from the gentle vibration of the engines its hard to detect movement with no land to see. . He tells us we will travel 3005 miles! but at twenty odd knots per hour it all seems a bit too much to take in. Basically its 6 days to Boston. 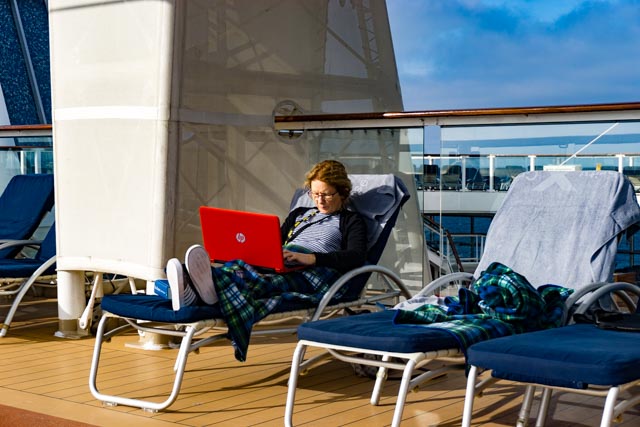 We have lunch in the Buffet area. I like the layout of the individual stalls, each with its different theme. Its similar to how the Jade is laid out but bigger; both work better in my opinion than the long galley counters of the Epic. We both go for the carvery where joints of Lamb, Beef, Pork and Turkey look tempting.

By late afternoon the sun slips behind the clouds and the swell begins to pick up a little (something to do with passing the atlantic shelf; dont think it had anything to do with IKEA though) but should settle in a cpl of hours. Its quite noticeable at the front of the ship but stable midships. We decide to go for an exploration and discover yet more little bars and the selection of specialist restaurants to the rear of the ship. 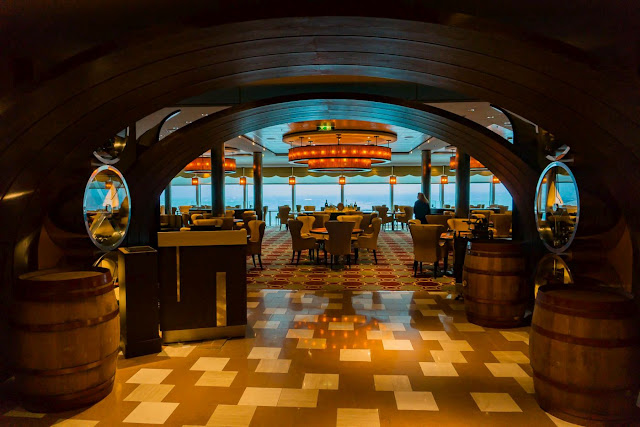 Overheard an elderly American lady at guests relations with a slight air of worry "Excuse me but we will be on American time once we arrive in Boston wont we as I have people to meet?" 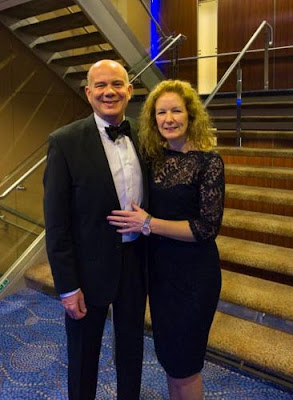 Tonight is the first Evening Chic night, we decide to eat in the MDR  - we have a dining package but the people watching on chic night is better in the MDR! Crispy breaded frogs legs which of course taste of chicken and rack of lamb for Dan - French Onion soup and lovely tender beef tournedos with morelle mushrooms for Jack. Jack causes a rumpus when her dessert of strawberry soup comes without the shortbread, this causes a little confusion as the waitress doesn't have shortbread in her vocabulary.. Eventually she realises it should be part of the dessert and returns with a full plate of what could best be described as shortbread croutons - I suspect the shortbread went wrong and turned to crumble or someone dropped a case of biscuits from a great height. Still it looked quite hilarious. 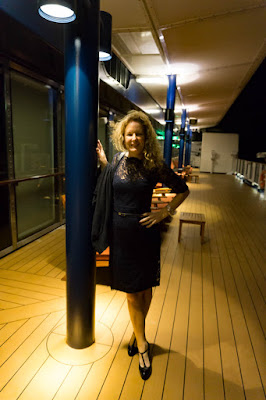 After a stroll around the decks and a peak at one of the shows (why do some cruise ship productions sing to backing tape - no power or drive leaving the music flat and lifeless - cut some of the dancers and put a real band on with them) so we leave after 5 minutes & we settle into the Ensemble Lounge for a couple of Campari & Sodas and listen to Peter (a Canadian pianist/singer) play standards and classics in the corner of the bar - he's very good. Later we watch a The Big Band: house band with sax, trumpet & trombone section playing ballroom numbers, many sequins on show on the dance floor. ( we later discover that this band will accompany most major shows in the main theatre). They are a fantastic 7 piece who can turn their hand to any style.


As we head to bed its pretty obvious now that the swell and wind has picked up a few notches. We are basically rocked to sleep from head to toe and side to side. The Atlantic is starting to misbehave...