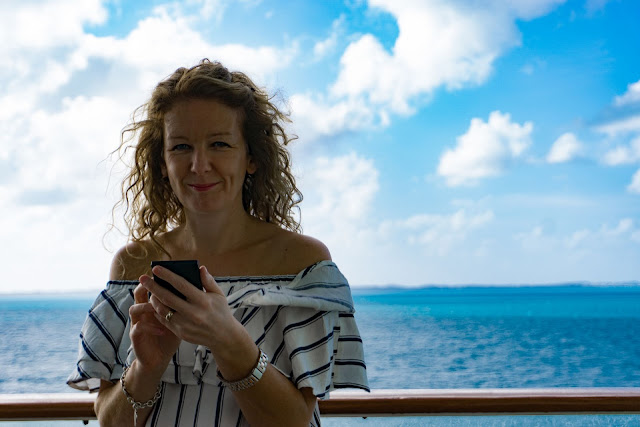 Awake to a morning of lovely sunshine and it feels very nice and warm. No sign of any land, though its only 7.30am when Gemma arrives with breakfast so we still have quite a distance to go as we are not  due in Kings Wharf until around 10.30am. Lie on the sunbeds on the top deck to pass the time - at around 9am the pilot boards and we slow down to a crawl. 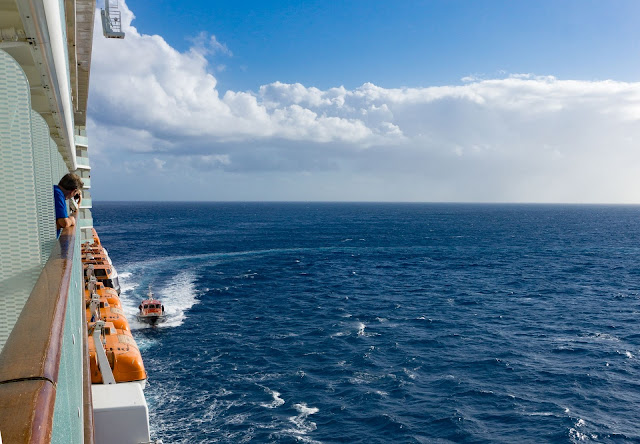 Its easy to see now why Bermuda so often gets missed off itineraries at the last minute if the winds are just that fraction too high; as to approach it requires a slow crawl through a channel surrounded on all sides by reefs, very visible today in the turquoise waters. 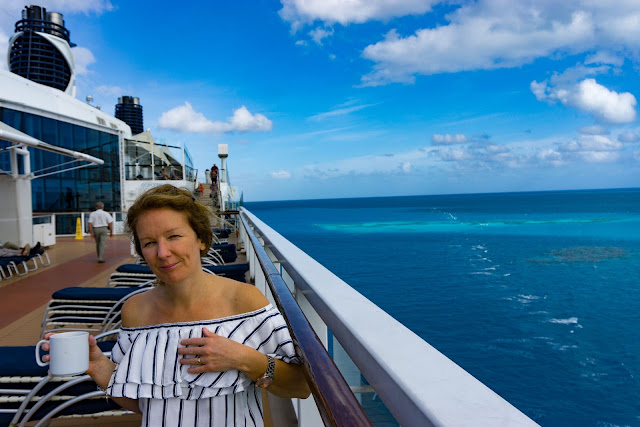 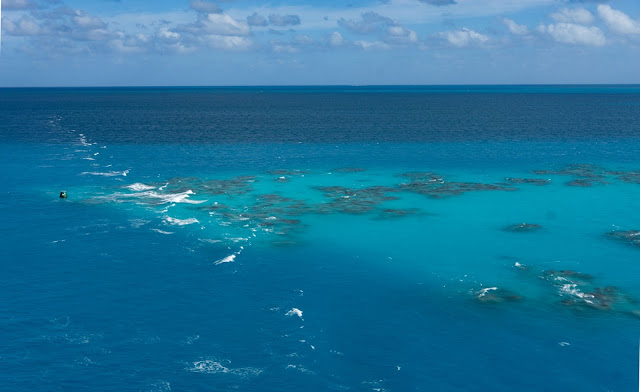 A Carnival ship (a rather tired looking "Ecstasy") is also in port. She's due to leave later today - we will be stopping overnight. We dock in Kings Wharf port next to the Royal Naval dockyards with its fort overlooking the harbour. 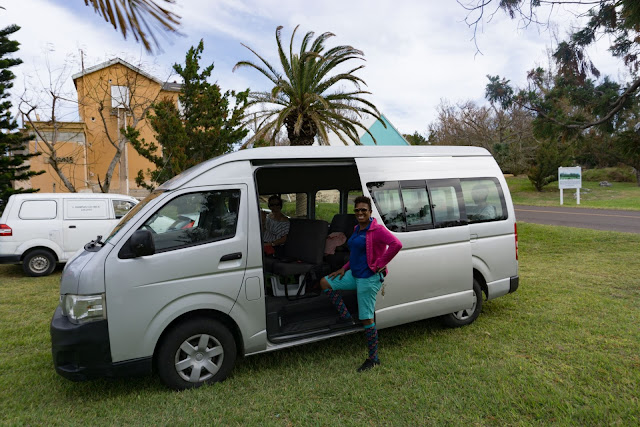 We have another private trip here with Winsome Transport organised by Pam from Nova Scotia, who put the whole thing together using the roll call feature from Cruise Critic. Debbie (or Socks) is our driver and guide and takes us on a pretty intensive full day excursion that covers what feels like every inch of the islands that make up Bermuda. 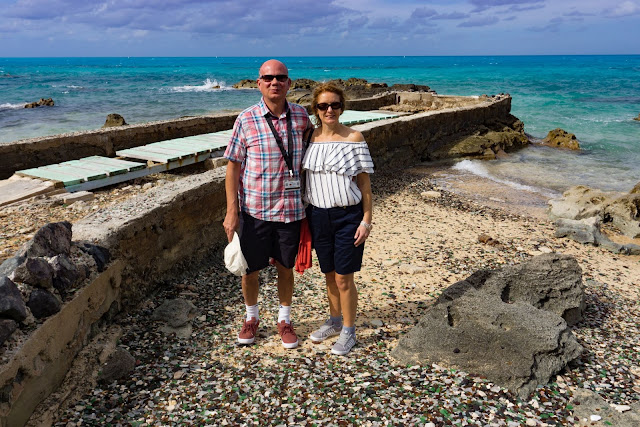 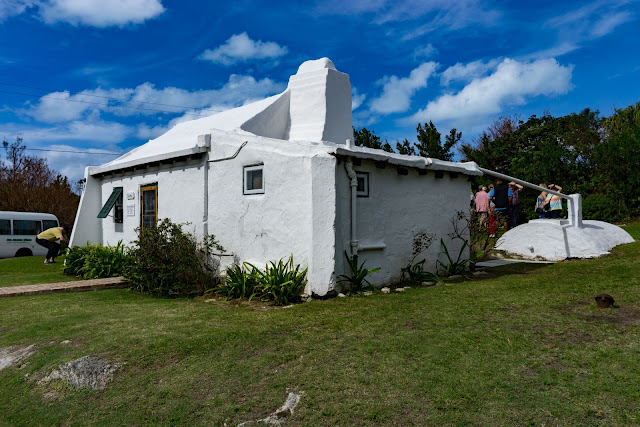 The weather stays nice for us and we climb lighthouses, collect glass from beaches, visit historic towns (every inch of Bermuda has some historic site) and churches, wander around heaven like golf courses and wade through the crystal clear waters on hot pink sand beaches - though from Jacks reaction I'm guessing the water isn't as warm as it looks. 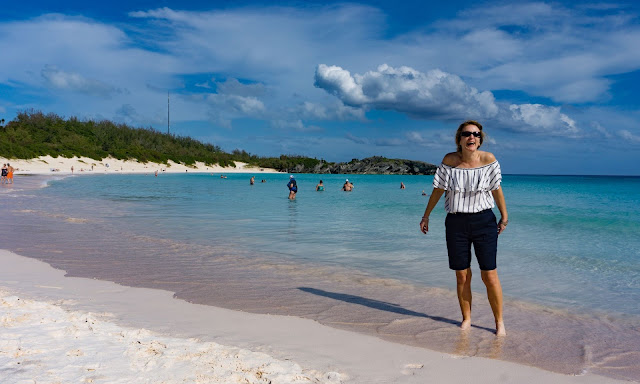 A  late lunch (2pm and we're all starving - if you take this tour have a big breakfast first) and a nice cool beer is taken in Swizzles Bar; after running through the menu we decide on  a lovely huge fish sandwich. 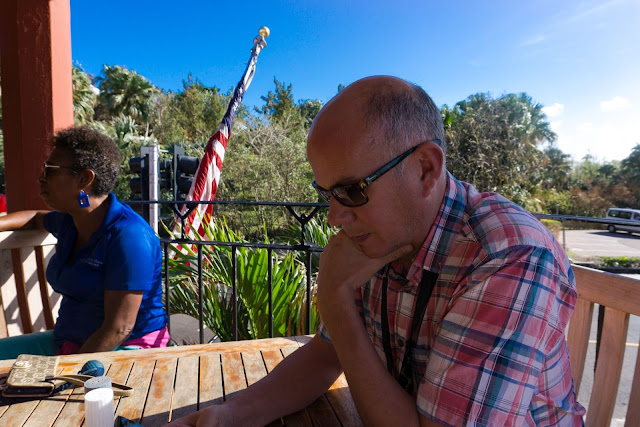 Bermuda has just been hit a few weeks ago by a hurricane so a lot of trees have lost their green flush  but even so it still looks as beautiful as you imagine and is certainly as expensive as you would expect.


After lunch we head to St Georges where we bump into the Mayoress (who Socks knows - then again I dont think theres a person on the island who doesn't know Socks) before paying a visit to the tiny town hall of this pretty UNESCO town. 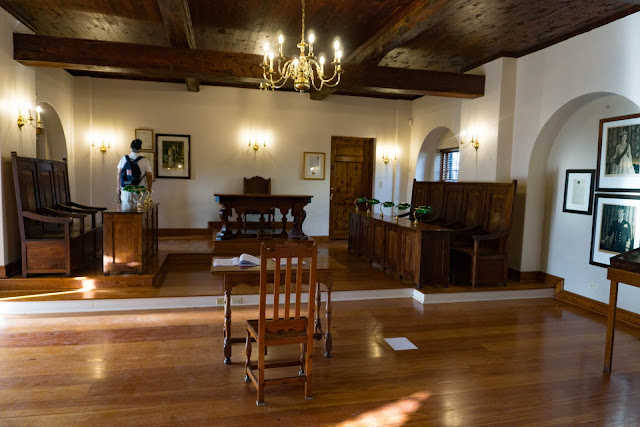 Now time for a quick history lesson - If you remember what I said earlier about the reefs that suround the island they played a significant role in how St Georges came to be the first capital of Bermuda. In the 17th Century Admiral Sir George Somers was leading a fleet of settlers over to Virginia from England. They hit a storm and realizing they were about to loose total control of the ships took the decision to deliberately run them aground on the reefs around Bermuda so they could walk on to the Island and from here settled and created the capital here calling it New London. 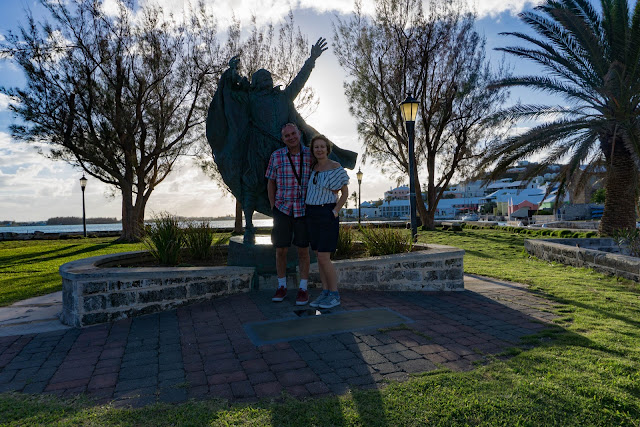 A new statue has recently been erected showing Sir George ecstatic about what he has discovered. Its interesting to note the statue was a unveiled by the Mayor of Lyme Regis - Sir Georges home town. Now that must have been a slightly better Mayors day out than the usual cutting the ribbon at the opening of a new supermarket. 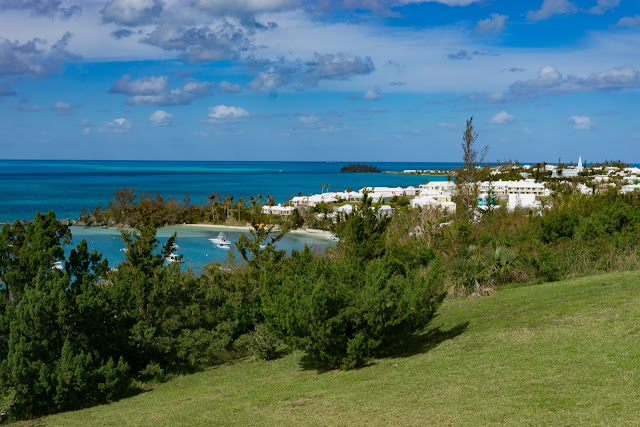 We return back to the ship at a pitch black 5.30pm, its been a full and enjoyable day. The "Ecstasy" has already left leaving just the "Eclipse" at the pier for tonight.

Tonight its the MDR again where Moses (possibly the coolest waiter known to man) informs us it will be 'Evening chic' night tomorrow. He has a wonderful deep Caribbean accent so chic is pronounced as 'chick night' and I'm half expecting a band of steel drummers to accompany him as he describes tonight's recommendations from the menu. There's a lot of beautiful ceviche style scallops and tuna that's just been shown the  griddle for a second or two on tonight's menu - its all fantastic.