As we prepared to pull away from Pier 88  last night there was some good news and bad news in Captain Mikael's departure announcement as he explained the route to Bermuda. Firstly its going to get a lot warmer as we head south now (so that's good - yay). Now I suppose you could argue that its also bleeding obvious but all is not that simple when Bermuda is on the schedule. Let me explain.

There seems to be some rather odd theories running around the ship when it comes to our next stop (the word "if" always seems preface Bermuda) and it doesn't really have much to do with the Bermuda triangle. It would seem over the years that cruise liners often drop Kings Wharf from the schedule at the last minute.


So you can feel a "but" coming on when the Captain begins his report and in this case it was noticeable that everyone was listening that little bit harder. But it's just the usual we will  have to pass through a little bit of a swell tonight and all's well, we will be seeing beautiful Bermuda baby!

Now to be fair its probably about 1am by the time we hit this "little" swell and most people are tucked up in bed after NY or watching the election. I gave it about 10 minutes before boredom set in. 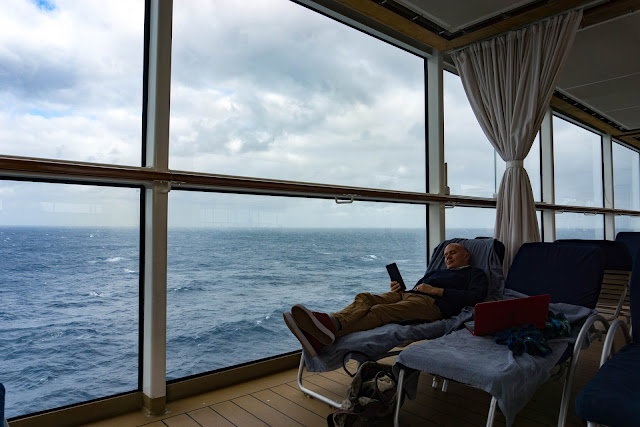 A bit of a rollercoaster of a nights sleep then but its quite amazing how it just becomes the norm. I'm typing this on a quite warm (for us Brits) sun deck watching the front and back pitch up and down like a see-saw whilst the horizon at the side is 100% sea one minute then all sky the next. The sea looks angry but the sky is white clouds with a nice hot sun breaking through every now and again to warm our tired New York feet.


Dinner tonight (its chic night) was in Qsine again - whilst the idea is ok'ish one criticism I would make is that some of the portions are just way to large especially given the richness of some of the dishes. Its easy to find yourself even after ordering the recommended amount ( 5 or 6 dishes) quite full before your half way through as there's no consistency to the size of each of the dishes.


Tonight we had the Lobster Escargot (again), followed by a selection of souffles/ soups presented rather like a chemistry experiment, a Portugese salmon dish "cataplana" cooked and served in a copper shell, filet mignon and a "Persian" chicken kebab.(these last two dishes are full size mains rather than the usual tapas scale and following the very rich souffles are a bit too much).