Drizzle greets us as we arrive into Savona - a pretty port town where the Diadema seems to be almost within reaching distance of the town for a change. Fortunately we have a trip booked today or to be more precise we have a bus booked for a simple drop off and return to Genoa - which is probably a good thing looking at the darkening skies above. 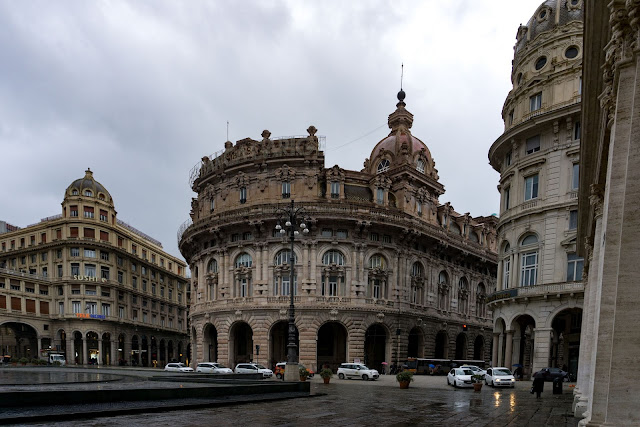 We are a mixed bunch on the coach, mainly French and the rest made up of various countries who just happen to understand English. It makes for a rather interesting commentary as we travel along the coast across huge floating bridges and deep tunnels. Our bi-lingual Italian hostess speaks perfect English (and French Jack reliably tells me).

She supplies us with a handy little map and goes through everything we'll need to know (and where to go) re Genoa and handily also dishes out a Costa waterproof poncho to stop you drowning in what is now a proper English downpour. Fortunately Jack has come prepared with a rather battered parapluie so at least she doesn't have to look like a cling film wrapped tourist...

The rain has slightly eased when we arrive but looking at the sky I don't think it is over yet so I don the emergency Costa poncho. Every trader in Genoa of course immediately surrounds the bus on arrival to sell you an umbrella. Genoa itself is a very walkable and stunning medieval town. The main sites are all in easy walking distance of each other and luckily most of them can be reached by staying under the loggias of the buildings. 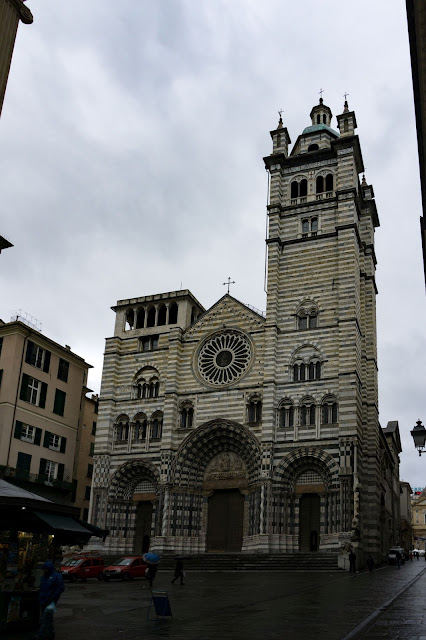 Our first stop is the Cathedral of Santa Lorenzo. It reminds me from the outside of the cathedrals of Florence or Sienna with its imposing striped granite facings both inside and out. The cathedral had a fortunate escape during the second world war when the city's port and warships were being shelled as part of a British Operation. Due to a slight miscalculation, a British battleship fired an armour-piercing shell at an Italian Cruiser and missed (by quite a margin) - the shell landed  in the south-eastern corner of the cathedrals nave. The soft material of the walls (compared to armour) failed to detonate the  fuse and the shell therefore did not explode. It is still here displayed in a corner - I presume they defused it! 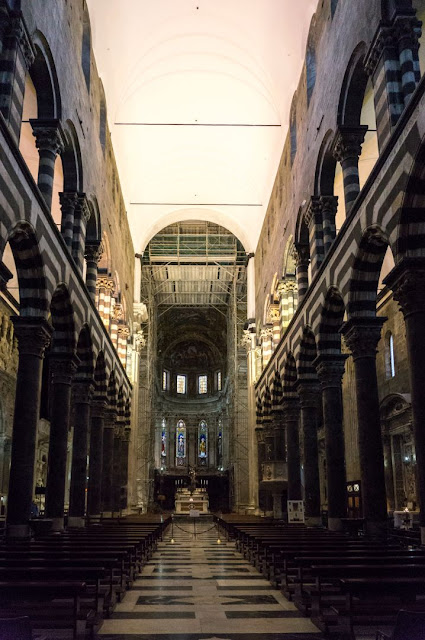 Next we continue across the square to visit the Church of Jesus and the Saints Ambrogio and Andrea. A stunning building on the inside despite its rather more modest exterior in comparison to the main cathedral. The altarpiece is the thing to see here, a 1608 masterpiece by Rubens "The Circumcision" (ouch). 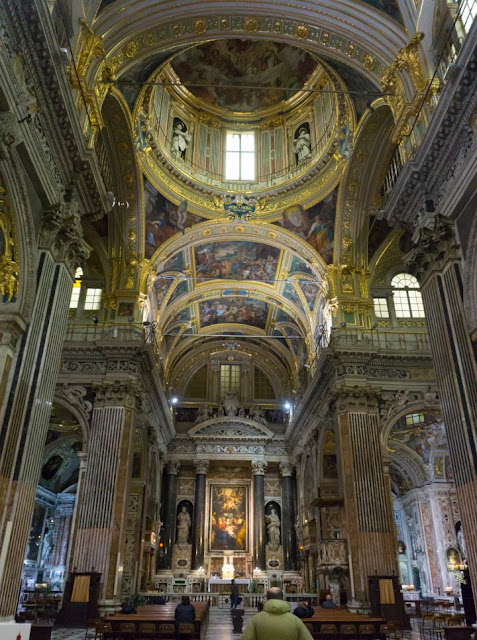 Coffee and some respite from the rain being needed we nip into a little bar - everyone seems to be wandering in for a quick coffee and a piece of focaccia for a morning snack.


From here we wander through towards the old gate of the city, the Porta Soprana with its two majestic towers, where tucked away in a corner behind the city walls is the house of Christopher Columbus. 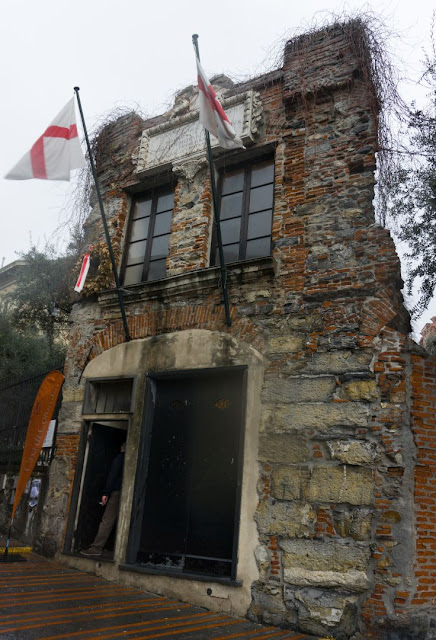 Other than the churches the big attraction in Genoa is the UNESCO area of bankers palaces so we make our way  through the Maddalena: a network of narrow medieval alleys that lead to the city's unmissable Via Garibaldi, dubbed "the street of kings".

We start in the Palazzo Doria Spinola which  is one of over 40 Rolli Palaces in Genoa that was added to the list of UNESCO World Heritage Sites in 2006. Rolli Palaces were built and owned by the Noble republican families of Genoa and were the first example of exclusive public lodging in Europe, providing sumptious accommodations to visiting cardinals, princes etc. Here today we seem to be the only guests and the building is now used as an administration building for the town hall. A serious looking police officer shows us how to get to the first floor balcony to see the large frescoed maps decorating all the walls of what were the important trade points. The rulers of Genoa wanted to step out and look at the wealth. The windows have been blown open and it's raining on these majestic works of art so we run around closing the windows. Every wall is covered in a city map painted in the 16C ; a few maps are missing/destroyed because at some point (I bet it was the 60's) some lunatic architect added doorways to office rooms straight through the middle of the frescoes!


Then we wander down the drenched Via Garibaldi before diving into the bar in a museum for wine - focaccia and coffee. A young Japanese lady who also looks a little drowned  asks where I got my wonderful Costa poncho from and is overjoyed when I produce a spare from my ruck sack and give it to her. My good deed for the day done the sky clears and the sun pops out. 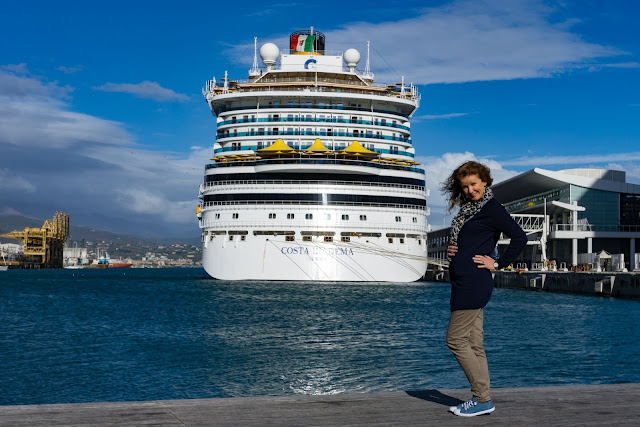 By the time we arrive back in Savona for a late lunch on the ship the sun is out and you would never have known it was raining this morning. Please don't tell me the sun came out and the rain stopped   as soon as we actually left this morning. 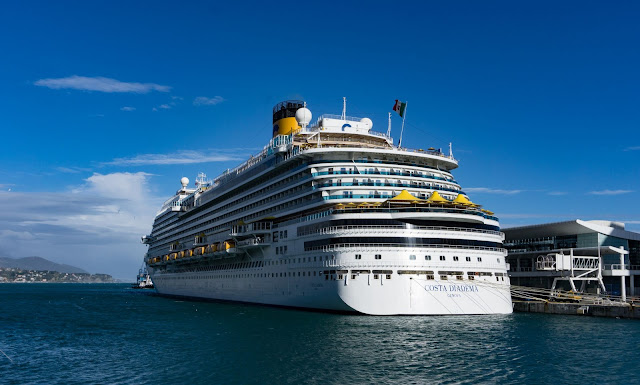 Savona is actually one of the few places on this cruise where it's actually been possible to get a decent picture of the ship. You are normally either too close or there's a huge building alongside her. She's quite a graceful looking vessel for her size with nice classical form - as opposed to looking like a  tower block at sea.

Dinner tonight is excellent - the main being a lovely cut of melt in the mouth veal for myself and red mullet for Jack. Tomorrow we head for France - but tonight its rocking away to TNT and mellowing out to more Pink Floyd whilst sipping an espresso - ahh life is good.