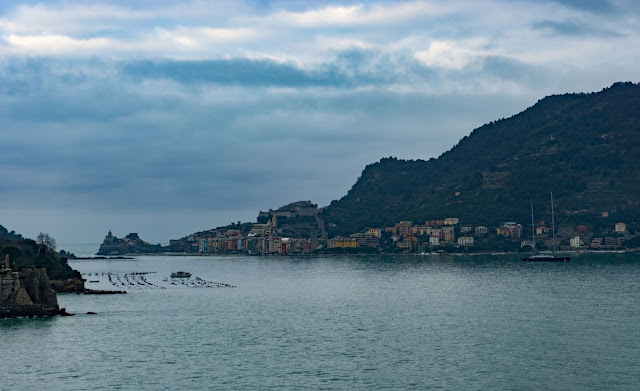 It's a little misty and cloudy as we edge carefully into La Spezia passing the oyster farms and getting our first glimpse of the Cinque Terre landscape. La Spezia is a large port - much larger than I was expecting. If you suffer from insomnia and want an alternative to counting sheep then there's enough containers here to put you into a coma. Quick breakfast in the cabin(we never seem to get the same attendant twice, so not only is it a mystery who will deliver the breakfast and at what time; there's the added fun to see how they interpret the order - what random bit of bread have they included for that tick box that says muffin). 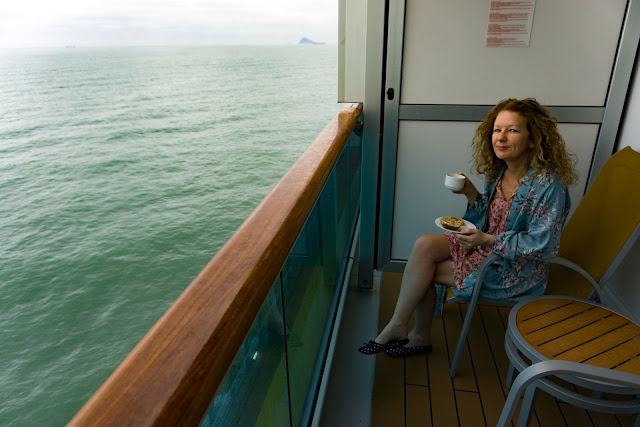 You have to take a bus shuttle to the port entrance from the ship - watching this procedure early in the morning from the balcony there seemed to be some lack of communication between the ship and the drivers resulting in long lines forming; it soon sorted itself out though and when we went down the line had completely gone. 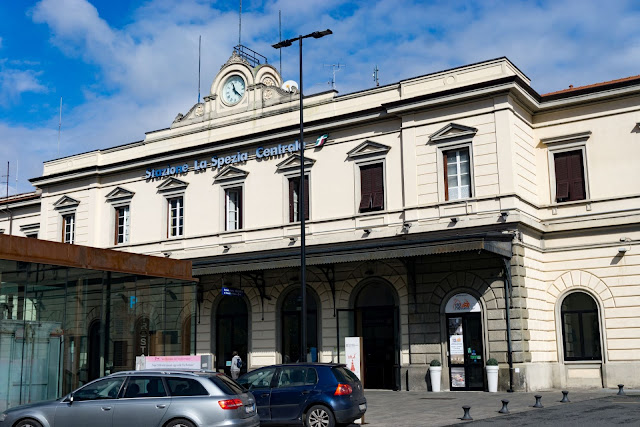 For some reason I had neglected to upload a port guide here as we knew we wanted to get to the railway station and head up to the villages of the Cinque Terre by train. (In the Spring and Summer you can do this by ferry which dock on the public waterfront - but they are not running at the moment and TBF the train is much quicker and only costs a couple of Euros). So after studying maps near the taxis we were just about to set off when an English couple (where have they been hiding all week) asked if we wanted to share a taxi. On reflection if the weathers good (which it is today the grey cloud having now lifted) I would walk - its not as far as the map seems to indicate and is a pleasant walk along the waterfront - just follow the fat palm tree boulevard along the waterside then turn right. It will take about 20mins if you stroll and as there's only one train an hour north you could use this to pass the time. 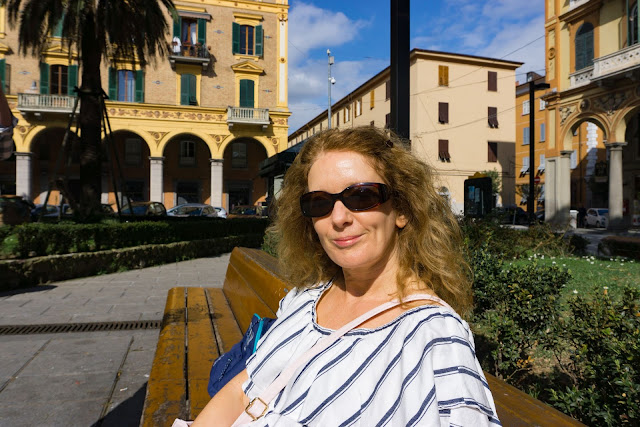 As it was we ended up at the station way too early - so we  wandered back into a little square in the town and sat in the sun. Very peaceful and La Spezia itself has some lovely architecture that reminds me a little of the South of France. 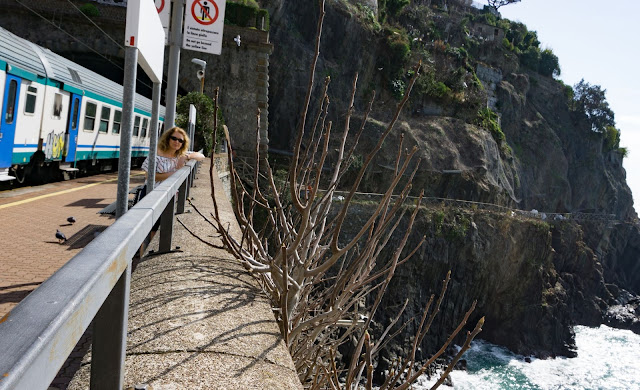 A short train ride took us Michael Portillo style to the village of Riomaggiore. The villages are scenic but the train ride is mainly through tunnels. Its a remarkable work of engineering. Just remember that when the train stops in a tunnel it's probably because the station can only fit a couple of carriages on so get out and walk along the tunnel towards daylight. Until the arrival of the railway in 1874, the five villages of the Cinque Terre were little fishing hamlets, accessible only by sea.


Our great plan was to buy a ticket for the coastal walk path and hike to the next village but unfortunately most of the paths have been closed this year as they have become too dangerous for the public to use & were being maintained. So after climbing down to the tiny little village harbour (you reach this through another tunnel) we climb out of the steep valley and around the village - all the time looking for a little gem for lunch. 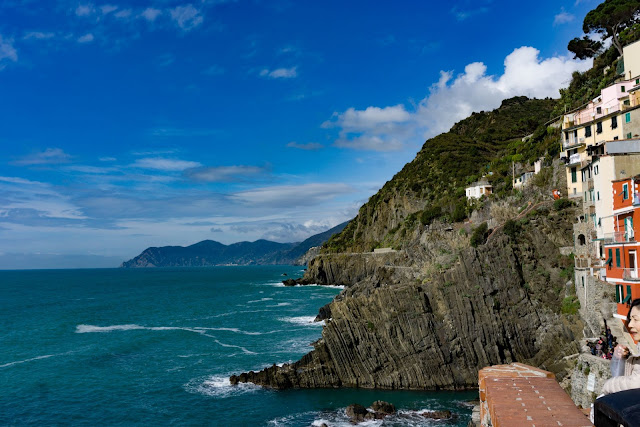 That little gem happens to be tucked away on a balcony at the foot of the main village. Its a lovely little family run trattoria 'La Lampara' excellent with everything prepared freshly by hand. I often have doubts about handmade claims especially when the village is so isolated but a quick look up the main village street shows a fantastically stocked butchers and a fish shop full of this mornings catch. I have the seafood ravioli in a red mullet sauce -Individually made soft raviolis, packed with clams, crab, parmesan and more with a thick red mullet sauce containing full pieces of fish fillet. Jack has a traditional veal bolognese which is also beautifully seasoned with a hint of nutmeg running through it. We wash it all down with a bottle of cinque terre sangiovese, which is gorgeous. 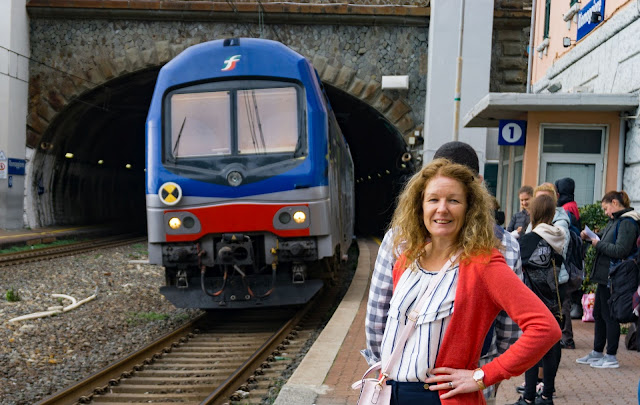 Another walk and climb around before we head back to the station (for some reason the trains are more frequent going back as the intercity service from Savona stops at this village on its way to Genoa and Pisa) and head back to La Spezia where we stroll through the town and along the waterfront (the route we should have used this morning).


Dinner tonight in the MDR was interesting as I shocked Jamie by ordering the rabbit - he seemed to want me to change my mind and order the other meat choice (I think he was worried about the bones) and in the end I think we both lost track of what we had ordered. Rabbit however turned up and he offered to change it but I stuck with it and it was delicious. A nice thick sauce accompanied it - though to quote that old saying "It tasted like chicken" - though a good strong chicken with taste. 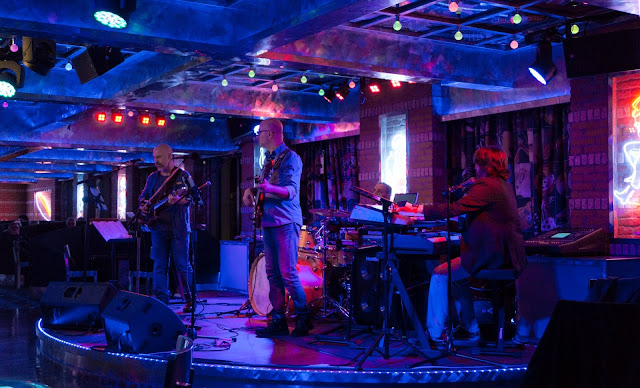 Tonight we catch TNT band- a French/Sicilian 4 piece rock group who do wonderful covers ranging from Pink Floyd to the Beatles in the Country Rock Bar. Now these sound good; nice and loud but in a strong and exciting way. When they take their break and the usual two piece come on it confirms my theory that the two piece are adding so much reverb to make themselves sound a bit fuller its distorting the sound and booming out the room.

Later we catch a bit of a Spanish guitar style duo who are playing classical numbers that the dancers are going nuts for, filling the dance floor with superbly executed sambas and flamenco moves. My head says I can do this but unfortunately my body doesn't seem to comprehend what's required.