Another gloriously warm morning greets us as we have tea on the balcony and slowly edge into the port of St Petersburg, The Viking Sky is now shadowing directly behind us.  We are in Russia; not quite sure what to expect. We have been told by SPB to expect at least 45mins to clear the immigration and not to expect anyone to crack a smile during this process :)

It does indeed take exactly 45minutes and none of the ladies ever do manage a smile. It actually looks like it shouldn't take half as long as it does. We spend the time in the line with a NZ lady watching each booth and the time seems to range between a few minutes if you have all your paperwork in order to up to 30 minutes per person or sent back if you dont have your tour papers which act as your visa.

Anyway we finally get through and meet our guide for the day 'Elena' who speaks perfect English and guides us to our 18 seat Mercedes Bus, opulently decorated in an Amber wood effect (your going to see a lot of this in Russia)
Once we are all assembled, which takes time as everyone has to get through immigration, we are on our way. St Petersburg is made up of many interconnecting islands (by road and canal) and our first stop is to one of these on which stands the Peter and Paul Fortress. Within the Cathedral here lie the tombs of all the great Czars and Elena does a great job taking us through the history(tomb by tomb)


We have often visited exhibitions at the National displaying selections of Icons from the Eastern States - but these are usually panels or individual paintings removed from there original purpose so its very impressive to see how a proper Icon Screen  is actually used in a Russian Orthodox Church.

Unlike a Christian Church the Alter/Sanctuary is hidden behind a gate of icons from the nave of the church when a service is not being held. Overtime this gateway has become so decorated with gold leaf and the icons themselves that its now the most decorative part of the building. They are simply stunning.


Back on to the bus and into the air conditioning - phew. And its time to head out to Peterhof which we will reach by one of the many Hydrofoils you see darting around the river Neva. Its a short wait on the riverside and a relatively quick trip (though I do doze off).

Elena is the master of handing the SPB flag to one of our small group and darting ahead of us to get our admission tickets before we even catch up. The first thing that surprises you when you arrive here is how big the hydrofoil port is. There's room for 6  and they zip in and out like clockwork - and this is just people arriving by water at the beginning of the season.


So where are we. Its very hard to try to simplify Russian history but basically it was a hugely powerful and rich royalist country before the revolution. It also had extremes - it was hot and warm or bleeding freezing so you had to build a few palaces; one for winter; one for summer and one for your dresses and one for your art etc etc etc .. And basically every Czar that came along decided they needed to do a bit of home improvement/extension on what the previous Czar had built. 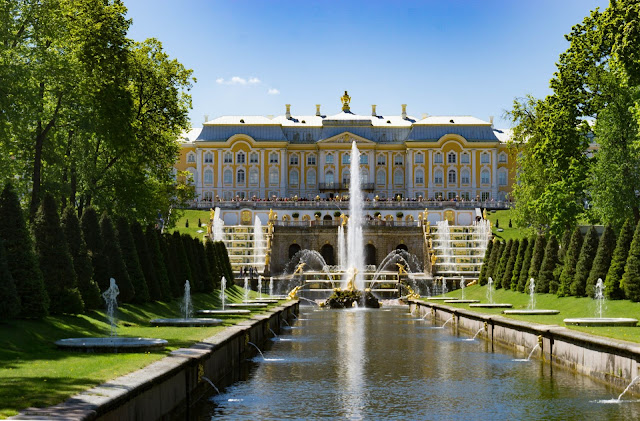 Peter the great started this little homestead for himself as a summer cottage.  He had a bit of cash to burn and wanted to impress and had seen Versailles. He also liked fountains (by the way every fountain is powered naturally - no pumps - just pure gravity; and miles and miles of pipes and lakes and pipes and lakes and smaller pipes and pressure. 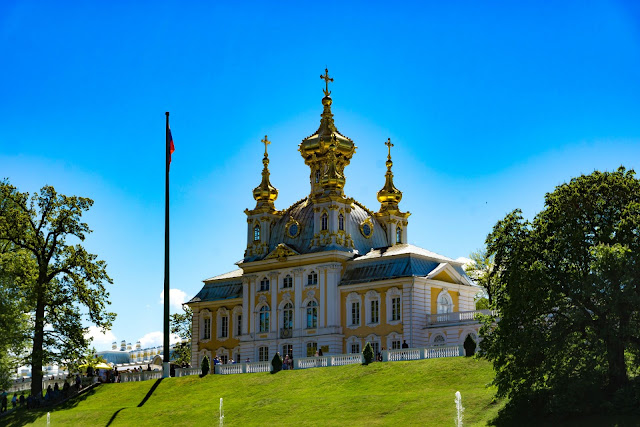 Its opulent - its impressive and its vast. The gardens stretch for ever: fortunately we walk around at quite a leisurely pace through the woodland, as its getting warmer and warmer.

Its soon time for lunch and Elena drives us to a little hotel that has a banquet dining room attached to the back and seems to be a venue SPB use a lot as the car park is full of their mini buses.


Lunch is traditional Borscht, Chicken Dumplings and a dessert and is included in the tour price - as are the shots of ice cold vodka to wash it down with. Lots of `down in ones` followed by grimaced looks - when in Rome! (though Elena points out Vodka and Russia is a bit of a myth as the Fins/Polish are the biggest drinkers of it)


Next we are off to Catherine the Great's palace at Pushkin. Clearly having that little summer place that Peter built at Peterhof wasn't enough for Catherine (especially for a lady who had 15000 dresses). Its hard to actually stand in any position to get a sense of scale using the camera of this place so I'm going to borrow a drone photograph from the palace's own web site.


If you thought Peterhof was a little  bit "flashy" - this place is so plush that if you stood still in the rooms for too long you would probably end up coated in gold leaf. Its no surprise to learn Elton John has declared it his favourite place in the world  and has performed at several private parties here (wonder if Putin was invited ;)


Nice little surprise on the way back - it was planned but we didn't realise just how much fun this would be. Elena has decided we must have a trip on the St Petersburg Metro System as there is nothing like it in the world. 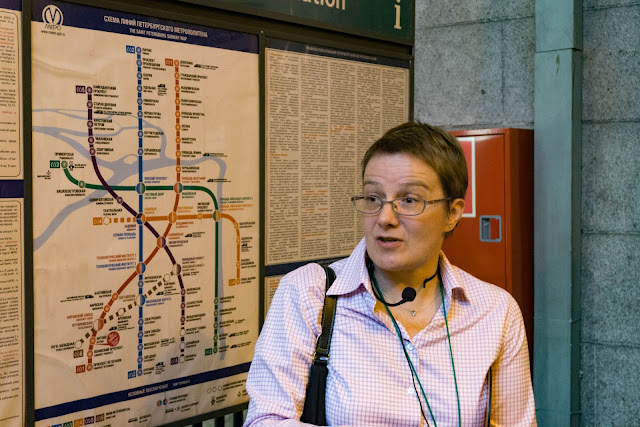 After a quick recon and distribution of barrier tokens we are fully instructed and ready to go. If we get separated we have to head to an unpronounceable station thats a few stops down the line. The trains run strictly every 60 seconds in each direction and the doors are allowed to be open at the platform for 6 seconds (it must be great fun in the rush hour). It's beautifully clean & efficient, unlike NYC. 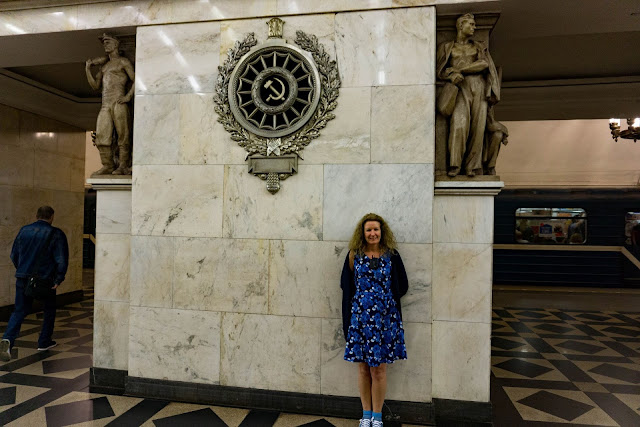 Every station is slightly different in design with classical marble and frescoed decoration all styled in iconic communist motifs. Chandeliers hang from the ceilings - the subway in Soviet times was considered to be the Palace of the People and was to be decorated as such with statues of the working man from various industry decorating throughout. 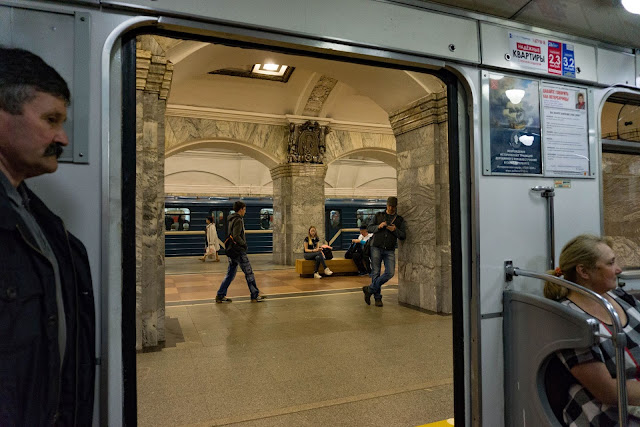 Its 6pm by the time we return to the ship - a simple process to get back through immigration. A fantastic few drinks in the sun on the Waterfront Deck and a great meal again finishes our first great day in Russia.  The Getaway stays here overnight for another full day in marvellous St Pete.