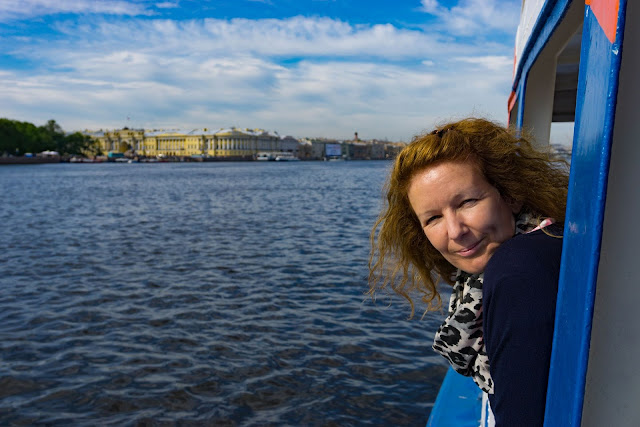 Welcome to Day 2 in St Petersburg. The fantastic Elena today takes us back to the embankment where we are loaded onto a river boat for a quick tour of the river and canals with commentary. This may have been better if we took a smaller boat and got to experience the side canals but the best buildings are right on the waterfront and impressive they are, including the KGB headquarters.We're on our best behaviour! 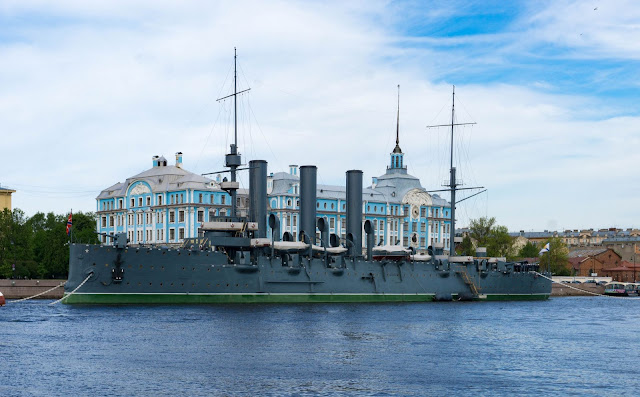 We get a close up look of the Aurora battleship which is placed directly in front of the Naval College. A typical St P building beautifully rendered in sky blue. In fact a lot of the buildings have recently all had a nice new coat of paint in St Petersburg (mainly due to the fact Putin claims it to be his birth place and has directed a lot of rubles here.

The Hermitage also looks great from the river. Remember Catherine the Great from yesterday - this is Winter Palace. There are also several more palaces behind that you can't see which are all now part of the Hermitage Museum complex - more on that later as its our last stop. 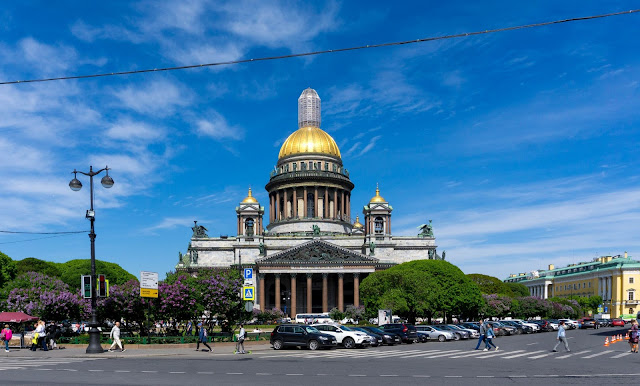 First Stop is St Isaac's Cathedral whose golden dome can be seen wherever you are in St Petersburg. A little unusual for a Russian Orthodox church in that it lacks the onion domes and seems more like a European cathedral. Inside the mosaics are an absolute joy to behold. 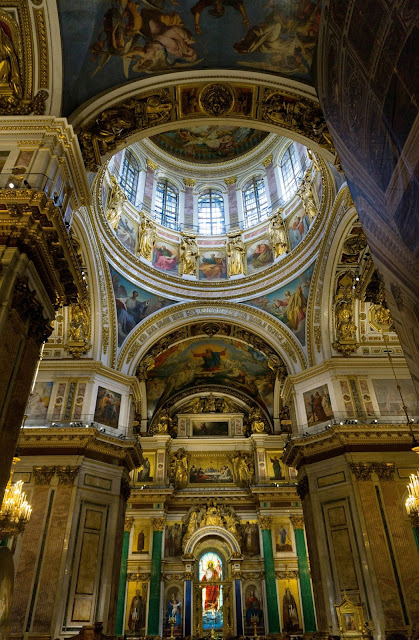 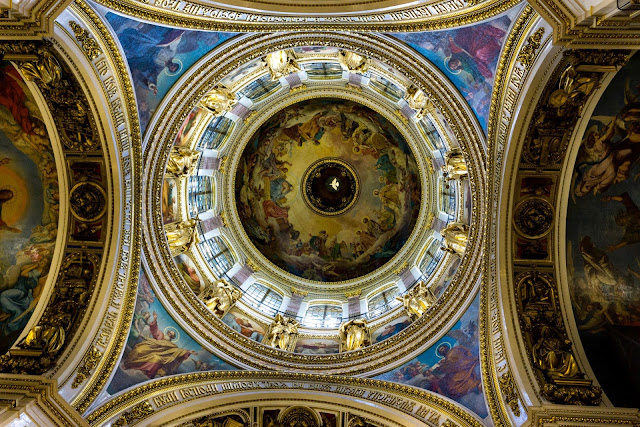 For lunch we drive into the city to what is best described as St Petersburg's version of Harrods food hall. A wonderful art deco building that sells everything from tiny little patisseries to tins of caviar you would have to sell your car to buy.

In the basement next to the  bakery we have a champagne lunch which includes a mushroom soup to rival the 'bistro restaurant' on the ship, a sort of creamy chicken goulash like affair and is finished off by a freshly made vanilla patisserie that is heaven on a plate. 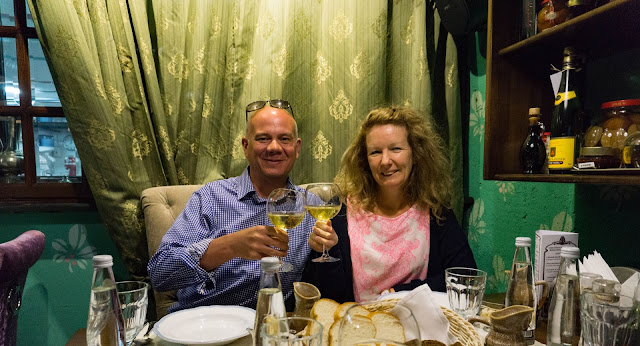 Next stop is the  Spilled Blood Cathedral - Russian Orthodox church with its enamelled and gold leaf onion domes, when in Russia! 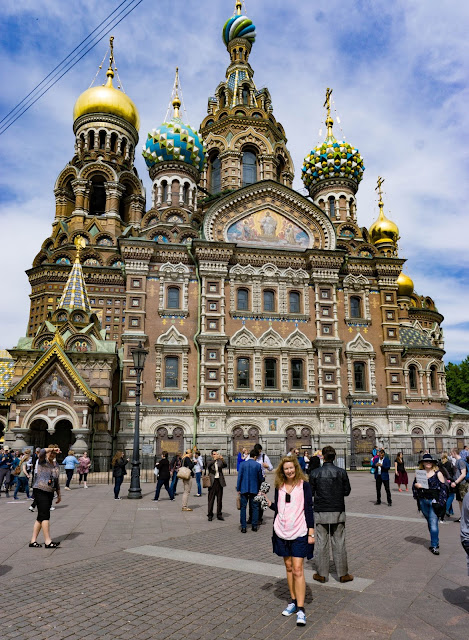 Once again every inch of the inside is covered in wonderful mosaics, gold leaf and iconography.

Next stop at Yusopov Palace which is located in the center of the city on the banks of the Moika inside is of course lavishly styled. It's a manageable size compared to the other palaces too. 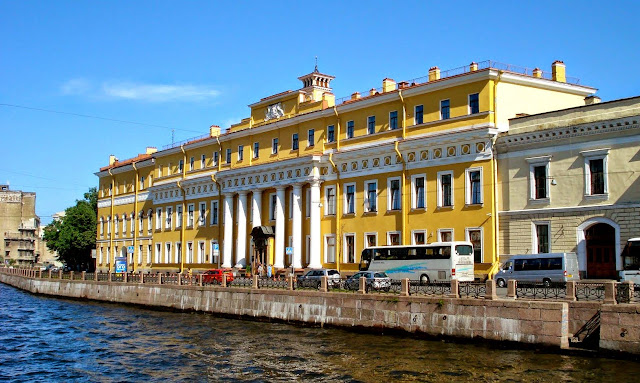 However it is  famous for  being the spot where the plotting and eventual murder of Rasputin took place in December 1916 - Rasputin was poisoned, then shot but eventually drowned after dragging himself as far as the river.. Elena gives us the full history of the palace which belonged to Felix Yusupov and the story of Rasputin; he was more a political advisor  than a crazy monk. One thing you must not miss is the private theatre - decadence gone wild. Rasputin was buried at Catherine's Palace, Pushkin but was exhumed after the October Revolution and cremated. 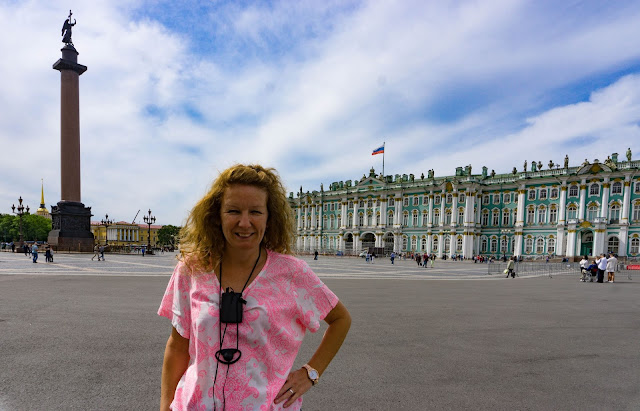 Next we're off to the Hermitage. A collection of winter palaces which now houses several museums. If you spent time looking at every item displayed it would take every day for 5 years! Elena has rightly  decided we should concentrate on the collection of Impressionist Art because you wont see any of these originals anywhere else and of course the Faberge rooms.

If you're wondering why you won't see many of these Picassos, Renoirs, Degas etc anywhere but here it's because they are basically un - repatriated Nazi loot.  The Germans stole them from conquered European countries; later they ended up in St Petersburg when the Nazis occupied it, then when the Russians liberated St P the paintings stayed here. There's a good chance if they ever did go on tour that they would not be coming back unless quite a few European countries start playing swap shop and return certain missing Russian art treasures. 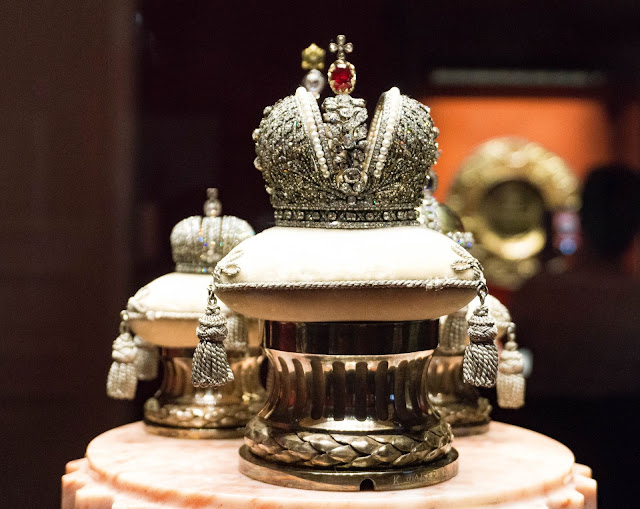 It really is a stunning; the Faberge collection occupies a smaller set of rooms and is jaw dropping. Items range from the most intricate diamond encrusted crowns  to simply enameled cigarette cases to of course, the eggs.

Its here that we finish the tour and head back to the ship in good time for dinner. Nothing booked tonight so we head to Savor for dinner (our favourite MDR room) where a bit of a line has developed and they are handing out complimentary champagne whilst awaiting  a table. Dinner is excellent and as we eat we slide slowly out of St Petersburg. 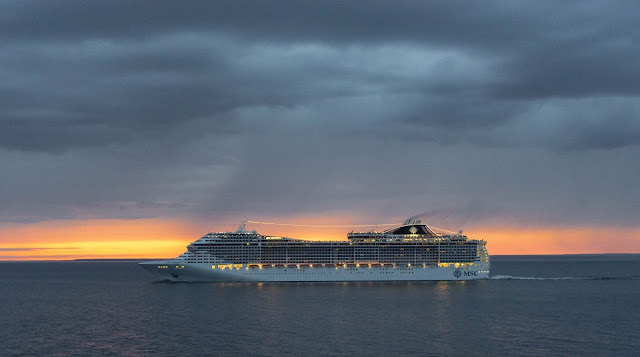 As the sun sets and we pass the island of Kronshtadt, ( naval base) and MSCs Magnifica puts her foot down and sprints past us  - I think they have to get back to Copenhagen whilst we have a leisurely jaunt across the Gulf of Finland north/west to Helsinki.