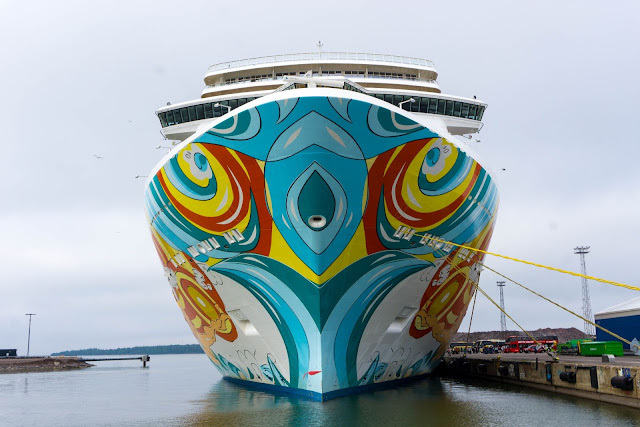 The timing of this cruise and the flight times meant that if we were to see any of Copenhagen we would have to take a flight out the afternoon before our cruise day. We used Easyjet to fly directly from Manchester to Copenhagen a nice short hop of about 90mins . The airport is to the south of the city and the port to the North so we chose an apartment/hotel in the redeveloped old port area to the North within walking distance of the fort and  den Lille Havfrue -little mermaid statue. Booking these type of rooms gives you the equivalent size of a hotel suite plus a little kitchen - handy for a quick breakfast. The Adina rooms were spacious, clean and in a nice area of the town. 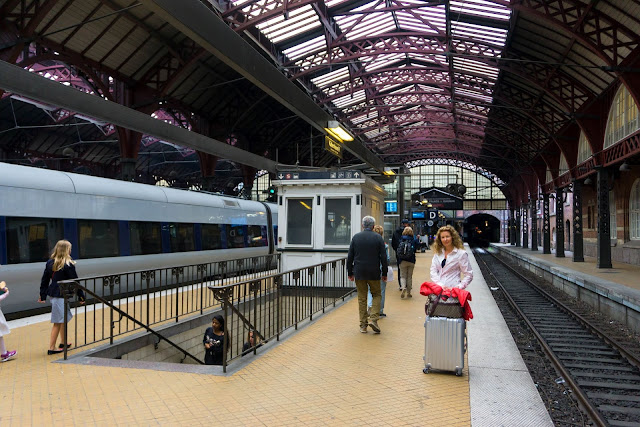 Initially my plans to get to the rooms were just to hop in a taxi, but we couldn't resist taking the train into the city (about a 20min ride) and then taking a taxi from central station (which is right opposite the Tivoli gardens) to the hotel. On reflection a better plan would have been to stay on the train for a further stop North to get out of the central city as we spent most of the taxi ride sat in rush hour gridlocked traffic in an annoying Mercedes which had some eco habit of turning off the engine every time we stopped moving and thus turning off the air conditioning - Copenhagen was warm and humid tonight. 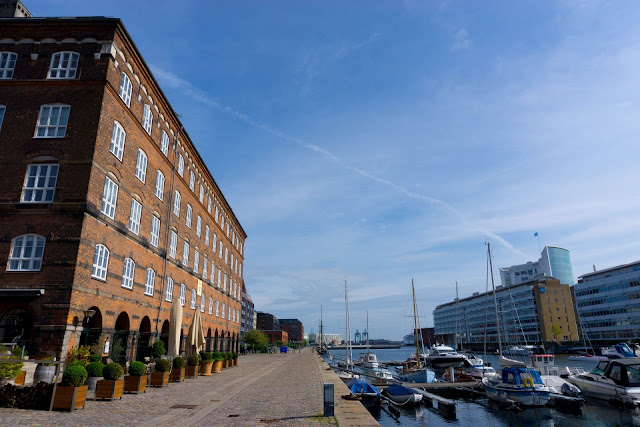 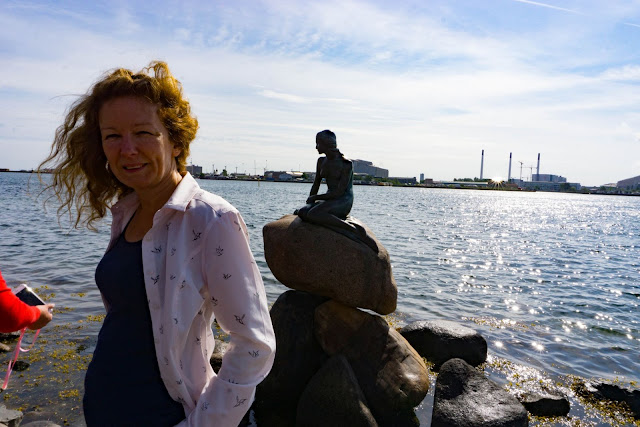 Boarding began at about 12pm the following day and reception informed us we could just leave the bags in the room until then so we had a leisurely walk across to the little mermaid. The first surprise was the weather. Hot and sunny at 8am (at least for us) and not at all what I was expecting from Denmark in early June. The harbour is only a few hundred yards from the hotel and it doesn't take long to realise you're in the right area as there are what seems like hundreds of tour buses descending on a small strip of esplanade to drop people off to look at the little mermaid. Last week I noticed on the news that  she had been doused in red paint as a  protest (fortunately they hadn't cut her head or arm off this time) but this had all been cleaned off.

Behind this area is a lovely Anglican Church and the Winston Churchill Park which both guard the entrance to Kastellet, a star fort which has been turned into a public park, though the central buildings are still official barracks. We completed a circuit around  the star shaped walls in the sun. I like Copenhagen, nice people - very clean city and well organised.

All this strolling around passed the time so it was time to return to the room grab the suitcases and head to the ship. Not as simple as it sounds as taxis seem to be a little bit of a rarity once out of the city centre and the hotel could not get hold of one for at least another hour. Fortunately there is a bus stop right on the corner of the street which appears from the map to go all the way to the Cruise Terminal buildings - however you must have the correct Danish Krona in coins and we had none. A solution came from the fact you can spend Euros in the Netto opposite and get change in Krona so armed with a bottle of water and some very odd looking coins with holes in the middle we got the bus. It was packed full of cruisers and we had a lovely conversation with an Italian man who was doing the similar cruise with Costa (we had looked at this and a few other options but no one seems to better NCL on the itinerary other than Viking). In fact quite a few ships leave every day from Copenhagen to begin their Baltic cycle; today at the terminal was NCL Getaway, MSC Magnifica, Costas Favolosa, Vikings Sky, RCI Serenade of the seas (I think we last saw this on our TA whilst in Nassau and it still looks like it desperately needs a lick of paint and some rust remover) - with all these passengers to deal with daily its no wonder taxis are so hard to find.

The bus dropped us next to terminal 1 which seems to be the Getaways usual spot. Boarding was painless with no lines to speak of. There are no airway type walkways onto the ship here its just a simple gangplank into the bowels of deck 4.  Rooms were not yet ready as it was a little too early but the decks are all open as is the buffet. Avoiding the first lunch buffet scrum as its usually everyone's first instinct we climbed to deck 6 where Savor ( one of the MDRs) was open for a more refined sit down 3 course lunch.

Our package had included the Ultimate drinks package and 4 upgrades to premium restaurants - grats were included. We booked a mid ship mini suite (why don't NCL just call this a larger balcony room) quite some time in advance so received double latitude points and had a nice $300 credit gift waiting in the room as well. The room is a little larger I think than NCLs Epic mini suite  and has a much better bathroom including a body massage shower and twin sinks. The balcony though is a little on the small side though we knew in advance about this so it was not a surprise. Pri introduced  himself  and indicated our cases would appear within the next  couple of hours so we decided to go and explore around the ship. 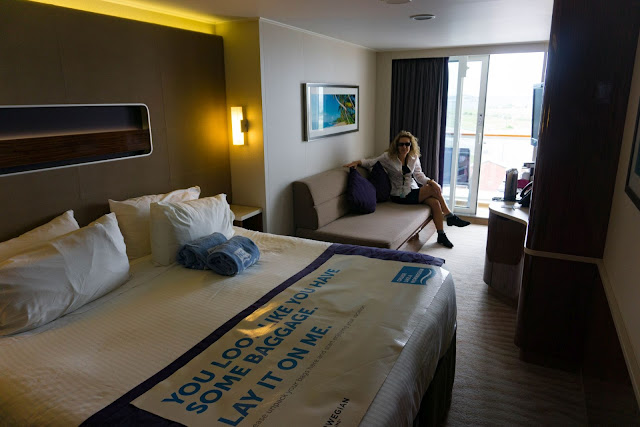 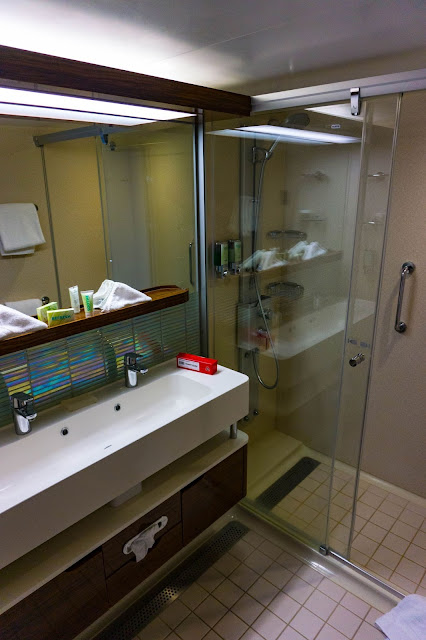 Jack's most excited that the fish carpets are back like they had on the Jade - at least she will know which is front and back for a change (just remember - the fish swim to the front). One of the things I never liked about the Epic was the pointless promenade deck where you cant see anything as it has a dual purpose as the lifeboat deck. The Getaway has overcome this problem in a similar (if not quite as successful) method to the Costa Diadema we were on in March. The lifeboats have their own deck and a wider promenade deck gives uninterrupted views out to see and wraps around 3 sides. This area also allows the Getaway to open up some of the premium restaurants to the outside as well - which is probably fine as she cruises around the Caribbean - not sure if the evenings will ever be warm enough in the Baltic. 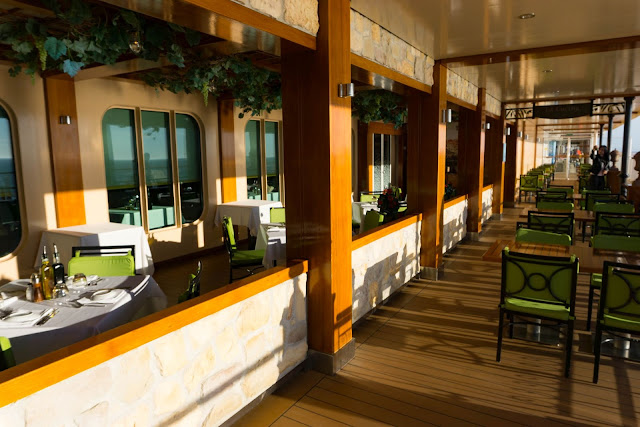 However it does allow some great seating and outdoor bar areas that are perfect for sun-downer cocktails - though there is a slight if rather obvious flaw in this idea in that cabins directly above these areas are surely going to get some noise issues - perhaps that's why they made the balconies so small so you wouldn't be to tempted to sit on them whilst quietly watching the sunset (an issue in itself in the Baltic as it feels like it never goes dark). 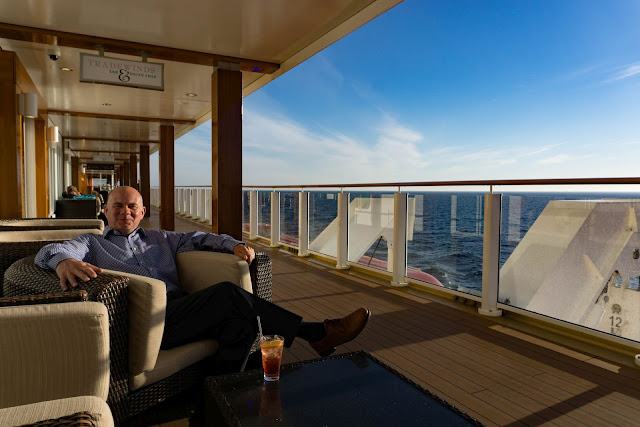 Eventually we are unpacked and one by one the ships all leave Copenhagen, peculiarly all heading North which is odd as Berlin (or rather Warnemunde) is directly to the south under the TV famous Oresund Bridge ("The Bridge") that connects Copenhagen (Denmark) to Malmo (Sweden). It seems that whilst the Bridge is certainly tall enough to allow ships through, the water itself is not deep enough for the larger vessels to pass. 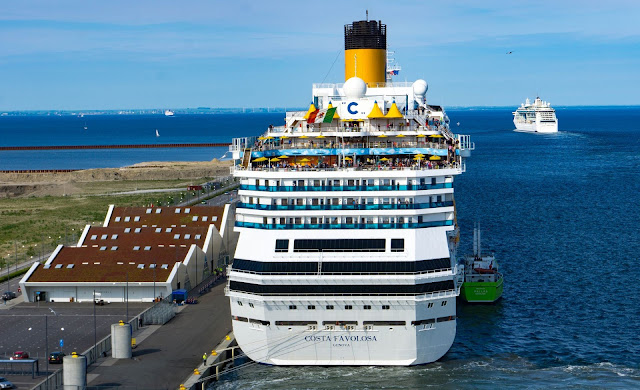 The usual NCL sailaway party then time to change for our first dinner and first experience of the latest edition to the premium restaurants "Ocean Blue". A seafood specialty restaurant, its decor is nice and calming, its staff attentive and most importantly the food is excellent - we book straight in again. I recommend the Oyster Rockefeller - Dover Sole - Cold Water Lobster  and any dessert. 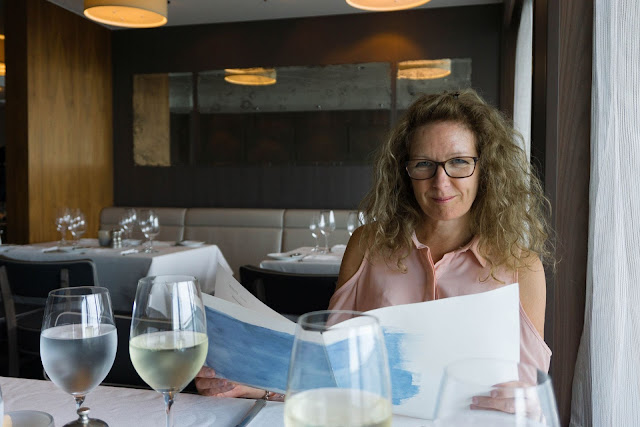 We have trips planned for the morning all pre booked with a third party company SPB tours (other tour companies are available). Big thanks to the roll call organisers on cruise critic which gave us a further discount on SPB Tours usual prices. Smaller groups and way better value than NCLs own options we booked the Berlin full day and 2 day Deluxe for St Petersburg (don't forget you must have a trip booked for St Petersburg or you wont get past immigration without a full visa) your trip ticket becomes your visa as long as the tour company are registered to do this. 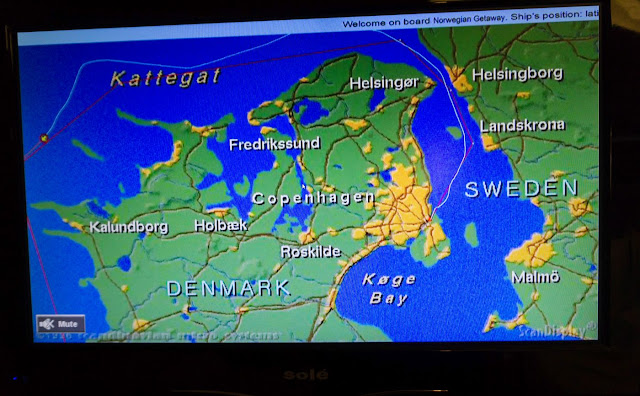 Its an early start tomorrow and a rather depressing 3 hour drive to look forward to. But you're only here once and I can't see Berlin ever being on my weekend away list. So an early-ish night after checking out various bits of entertainment around the ship. A  quick  check of the map shows we are heading south again. Weather forecast looks miserable tomorrow with heavy rain forecast for Germany but the good news is that rain front is heading east in front of us and behind it is clear weather which hopefully should last for the rest of the cruise.