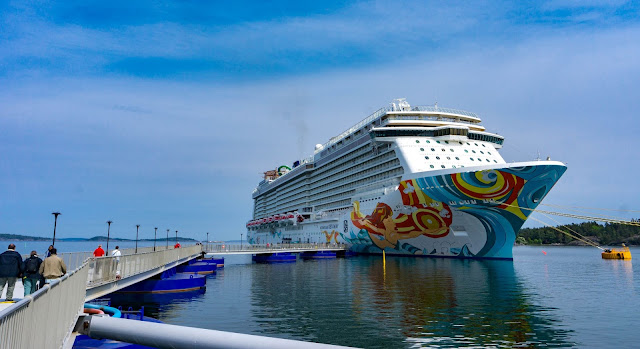 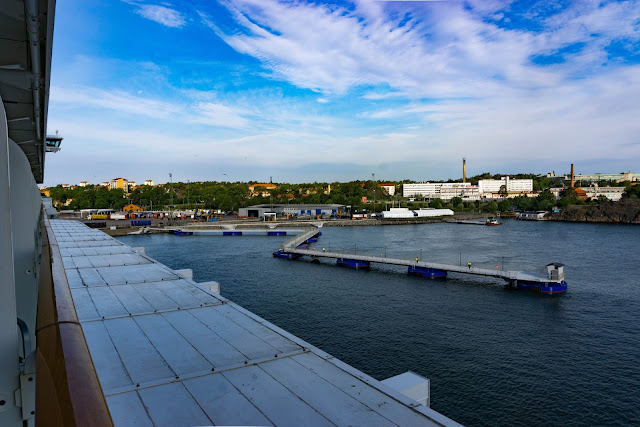 Awoke this morning to the odd sound of what at first sounded like a helicopter landing alongside but turns out to be some huge flexible self propelled pontoon that is slowly snaking out from the port of Nynashamn to attach itself to the ship.  The NCL Getaway is  too large to dock directly in Stockholm as there is an archipelago to negotiate also, so we find ourselves this morning in this deepwater port  nestled among some pretty archipelago islands that make up most of Sweden's beautiful coastline -  we seem to also have finally lost the Viking Sky - for the first time it's is not here with us. (TBF it's got one over on us and is docked in Stockholm city centre- grrrr) 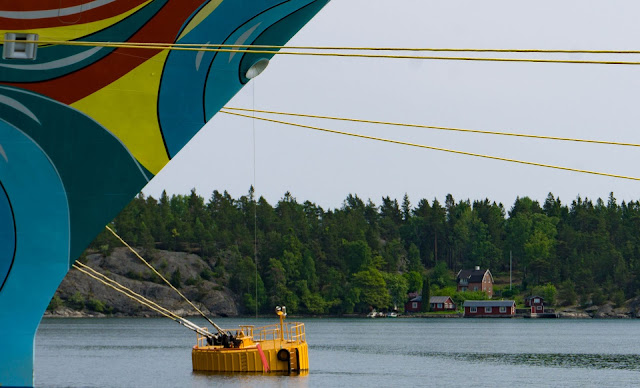 We already had NCLs timetable beforehand and had carefully worked out how to get to the railway station from the port, the train times and  how to get to from the station in Stockholm to Vasa Museum which is situated on one of the many small islands that make up the city - quite a walk from the railway station. It was going to be  a tight squeeze especially with the tight timings as the ship leaves quite early.
A cpl of things changed though. A few days before we arrived Captain Roger announced that the ship would be staying longer in Nynasham as the previous trip had shown the stay was too short. But secondly we still had cabin credit  so we killed two birds with one stone A) how to find a way of ever spending it  -  and B) take the stress out of getting to and from Vasa and Stockholm.

So we find ourselves on  a coach this morning heading into Stockholm for the Vasa museum. After seeing the HMS Victory last year (click here) this was a must. A rather bizarre history - the Vasa set sail on her maiden voyage on the 10 August 1628. Like most Swedish warships of the time the symbolic artistic adornment carved into her was unlike anything ever seen before. Upon completion she was one of the most powerfully armed vessels in the world yet the most ornate and beautiful - partly due to the fact the impatient King was always tinkering with her design and there was nobody politically strong enough to shout back at him "enough already" 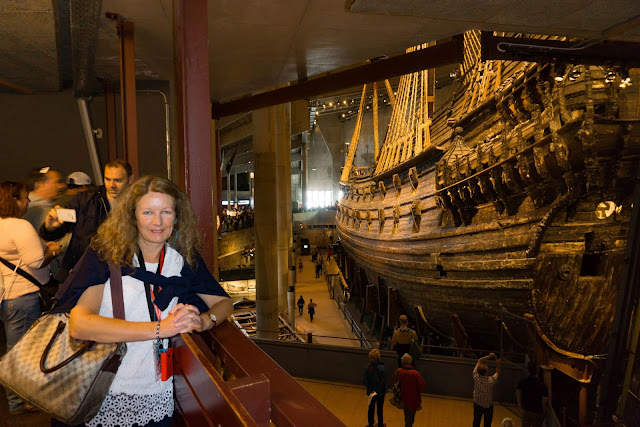 On her launch day as she inched her way from the dockside  into Stockholm's harbour a gust of wind caught her sails and she toppled and sank in moments - being far too top heavy. The king ordered an immediate inquiry looking to find someone to hold responsible  - however as the years passed this was abandoned with no results - hmmm I wonder why.

It's a beautiful well laid out Museum (the recovery and restoration is as impressive a story as the actual ship) and after parting with cash in the Vasa gift shop we have on a short scenic drive around some of the islands to view among other things all the Embassies (beautiful buildings in predominantly classical Swedish architecture except for some bizarre reason the American Em; who seem to have built a grey concrete 1960s blemish in the middle of the park.

We also pass queues for the Abba museum which is - after the Vasa - one of the most popular tourist spots in Sweden. Must be all those long dark sunless winters - it does strange things to people.

We are finally dropped off in the middle of Stockholm, right on the doorstep of the Royal Palace (If we time it correctly we should be back  for the changing of the guard). The Royal family here - rather like in Britain - play a non political role now and judging from how our guide talks about them are very well liked and respected - you cant look any where on the streets without sewing some shop selling Royal Family postcards or tea towels. 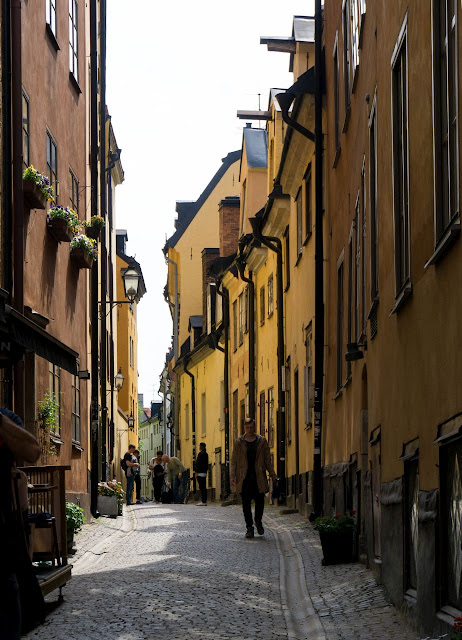 Stockholm itself is a beautiful city - one we could both easily move to; full of fantastic buildings, small characterful streets and lovely little hidden gems around each corner. Its historical past sneaks up on you in places such as this Viking cornerstone now part of a shops wall, the 18C cannon was put her to  protect the corner from damage cause by horse drawn carriages clipping it. 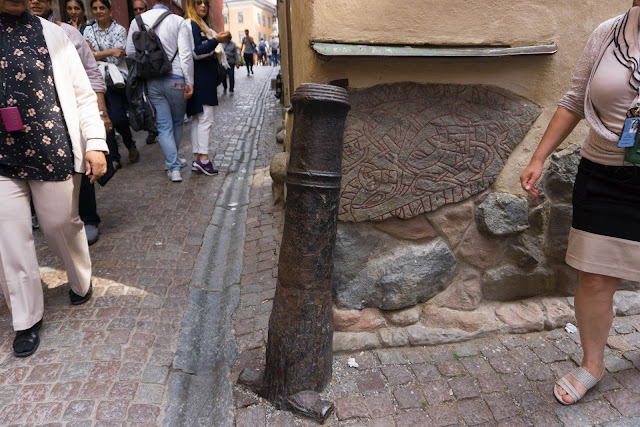 After the group splits for some free time we have a nice little coffee in a tiny little trendy bistro that seems to be cross between an Ikea showroom and a Marrakesh tea room - lots of table and cushion swapping to accommodate people and lots of  "Tack" (my one word of Swedish from watching "The Bridge") before we head back to the main Royal Square just in time to watch the changing of the guard. 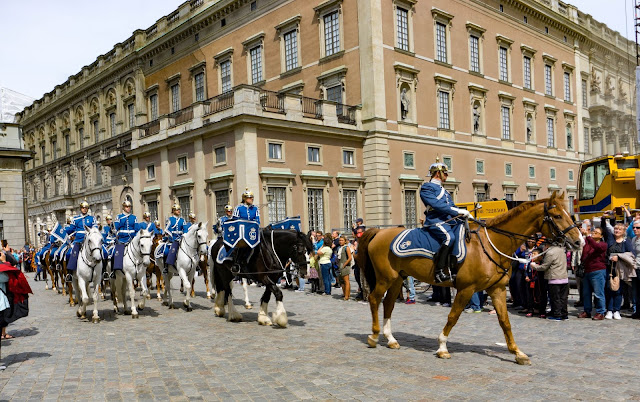 Back onboard the Getaway we take dinner tonight a litltle early so we can catch the show "Million Dollar Quartet"- good (nice and loud); though it did mean a little more to us having only been in Sun Studios last year (Click for details). It did feel like a show that needed some tightening up in my opinion - but it was great pleasure to listen to fully live music for a change. 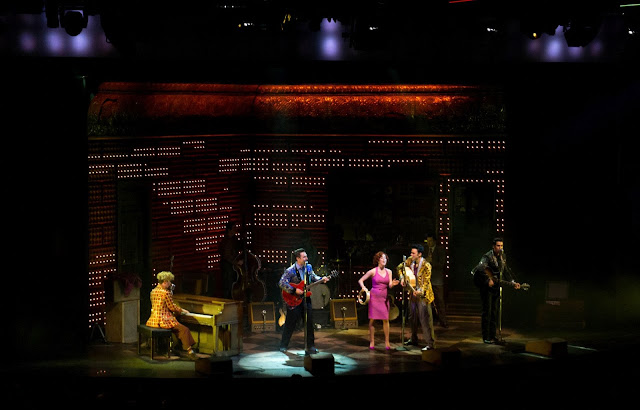 Afterwards the lovely Russian band "Sweet Beat" had taken up  place in the atrium  and (nice and  predictably as we sail away from Sweden) were  doing an entire tribute to Abba; so lots of dancing and singing. Anyway a nice sea day tomorrow to recover before we head back home. 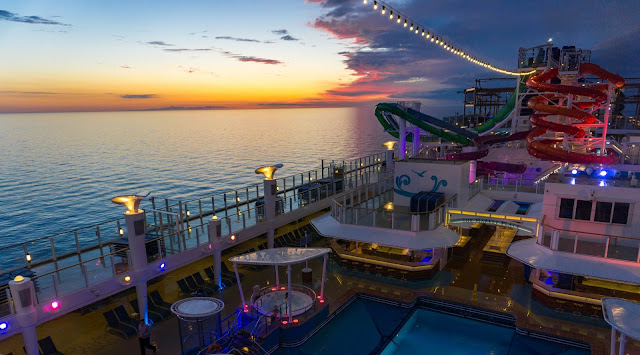