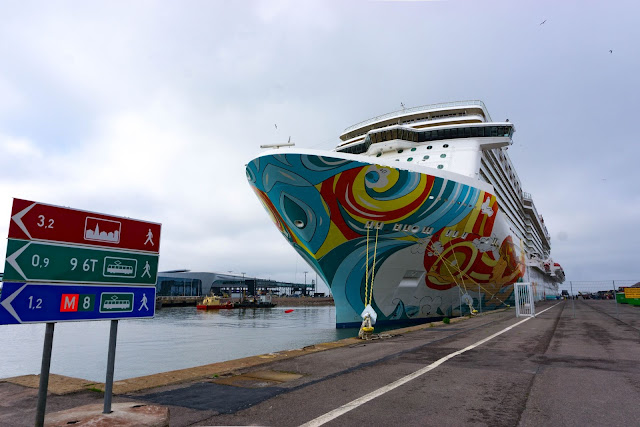 A cloudy but still quite warm morning in Helsinki. We have not booked a tour here (we decided to use our cabin credit for the Vasa trip in Stockholm tomorrow - its the one thing we want to see and it just saves us the hassle of the train). Back to Helsinki - getting into the city is quite simple as a tram stops practically opposite the ship - just follow the coloured lines on the floor  - though they do appear to have built another station even nearer to where our ship is but not updated the floor line. 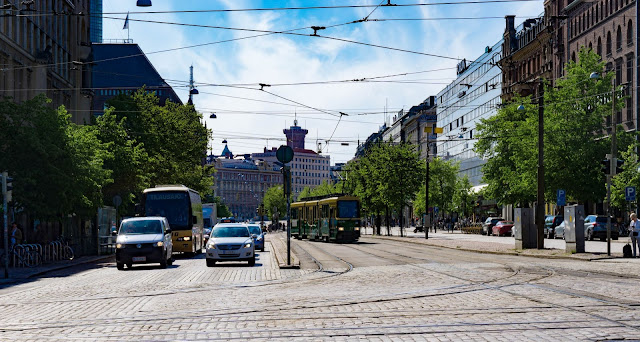 A quick look at some port guides and tourist maps tells us if we take the tram all the way to the railway station we can head out to the rock church then double back to the senate square then the market and harbour covering most of the sights. 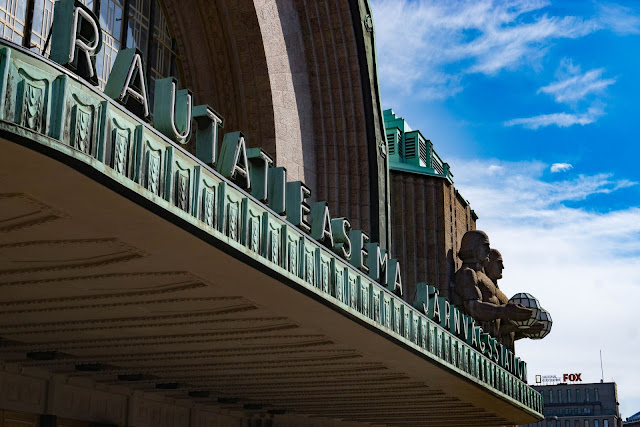 The railway station itself is worth a look. Built in a Art Deco with a neo classical Russian twist its dramatic and bold and reminds me in some ways of the metro entrances in Paris. Very Nouveau.

A quick check with a Japanese couple who tell us we are  heading in the correct direction for the Rock Church (Temppeliaukio) though as the map doesn't really show where the front is we end up practically on top of it without knowing. 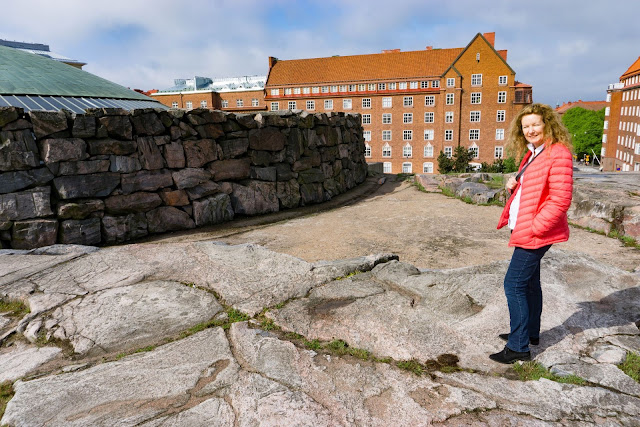 This actually proves to be a stroke of luck and a top tip. There is a small cafe built into the side, it's accessible through a rather small door; if you didn't wander around to this side you would not see it from the church entrance. Here the bathrooms are empty and you can buy your church admission tkts from the  cafe counter at a discount. When we walk around to the front entrance for the church we simply walk pass the two huge queues - one for the ticket booth and one for the bathrooms. 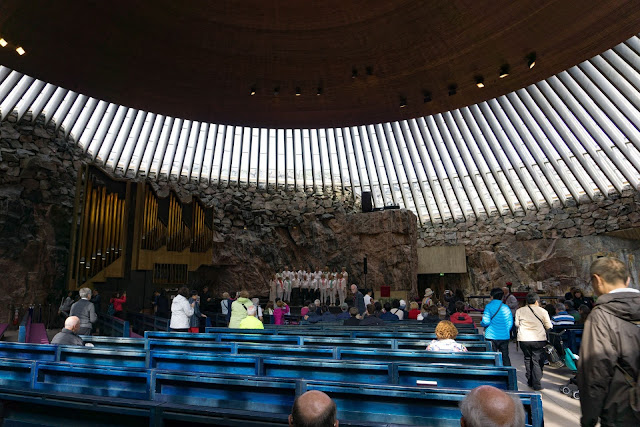 It feels a bit more like a church inside a concrete box rather than hollowed into the rock - it's very starkly lit with floodlights (perhaps that's the Lutheran style). Today there just happens to be a guest gospel choir singing but other than that it really is an in /out visit. 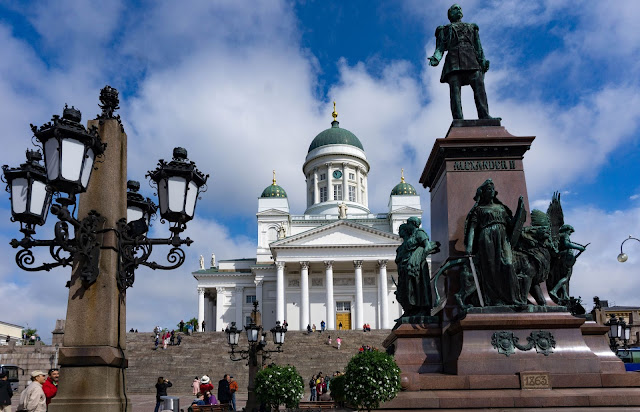 We head back the way we came towards the senate square a lovely area in the oldest parts of the city. Here we find the Government Palace and  Helsinki Cathedral all presided over by a statue of Alexander II. One thing the Senate square is missing though is anywhere to sit outside enjoy the surroundings and sip a nice strong coffee. So after some time inside the Cathedral (again very stark and brilliant white walls - the Lutheran style obviously is not one of high decoration but simple classical lines) we head towards the old harbour and the market.

If you want to buy fresh fruit the markets your place - if you want to buy tourist tat or that wolfskin coat you promised yourself for the winter, look no further. But if you want a nice coffee you'll have to wander a little further down the harbour.


With coffee in place we can relax and take in the sights of the pretty harbour all overlooked by the Orthodox Cathedral Uspenski. I was going to say relax but today of all days there is a military trade fair taking place in one of the parks and two Dassault Rafale fighter jets are constantly flypasts  over the harbour. Still lots of free baseball caps, keyrings, pins and tote bags are yours for the taking courtesy of  Rafale Aviation.

We walk back along the harbour passing the old lighthouse boats. The jets are still roaring above and at the far end of the peninsula we can see the giant icebreakers docked and resting for the summer. Hard to imagine when the weathers like this that the Baltic Sea would be literally impassable in places if not for these vessels.


We eventually find ourselves at  a tram line that seems to be pointing in the correct direction,  a quick look at the map and the tram numbers has us heading back to the ship in time for a late lunch on the sun deck.
Dinner tonight is at Cagneys - not as good an experience as it has been on previous occasions - though the food was excellent as usual. The staff seemed just a little overstretched with the restaurant this busy. Also the design of the room for this ships version of Cagneys is not quite as spacious as on others. It has the usual stern view windows but the design having to incorporate the (unused) outside eating areas makes it feel a  bit more corridor like and certainly more noisy. I had the veal chop - superb though far to big ;) - Jack feasted on the surf and turf (now lobster free unfortunately).