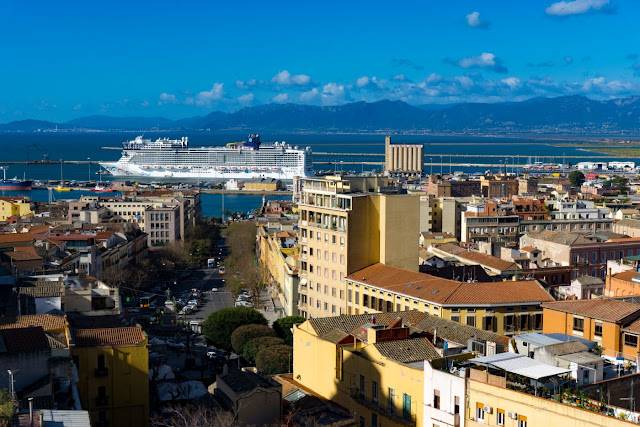 This was rather a last minute booking. The combination of cold wet weather at home, Jack having to use her remaining holidays and NCL's last minute offers email made it irresistible. The only slight issue was that on the website the only cabins left were 'guarantee inside' and we had never had an inside cabin before - so after a little thought (well a couple of minutes) we booked it.
We've never booked a guarantee before so it was a mystery which cabin we had until 48hours before the cruise. I logged on and there was the cabin number and a quick check on the deck plans show we seem to have a free upgrade to a balcony. Woohoo! 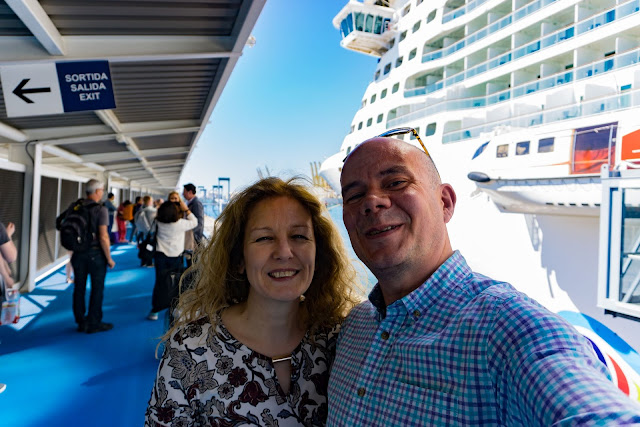 Day 1 - Boarding.
We took an early morning flight to Barcelona from Liverpool with Easy jet on the day of departure as we had visited Barcelona recently. Taxi direct from the airport ( El Prat) to the cruise terminal and boarding was a breeze. We didn't really expect to get any loyalty perks or freebies this time as it was such a last minute price but we still waited with some hope for our room card to indicate something - alas it did not.
It was hot and sunny in Barcelona but we had remembered to pack beachwear in our hand luggage to change into as we would not get our cases for a few hours. So after grabbing lunch, wine and beer from the Garden Room we settled down for a relaxing afternoon. 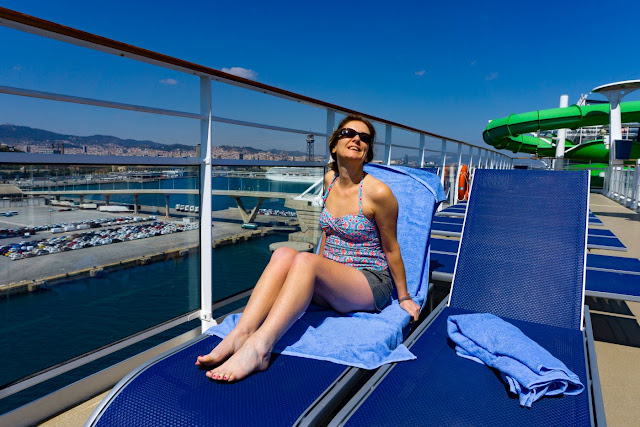 Cabins were ready by about 2pm and after unpacking noticed that Jerry the cabin attendant had left a latitudes letter  on the dressing table. Thinking it was just a sales pitch I just stuck it in my pocket and ignored it. We had made reservations for Le Bistro that evening after the sail away so whilst we went to change I decided to read the letter. I had to go to reception to collect my rewards. Bingo - 5  dining upgrades and $200 on board credit to the cabin. Double woohoo! 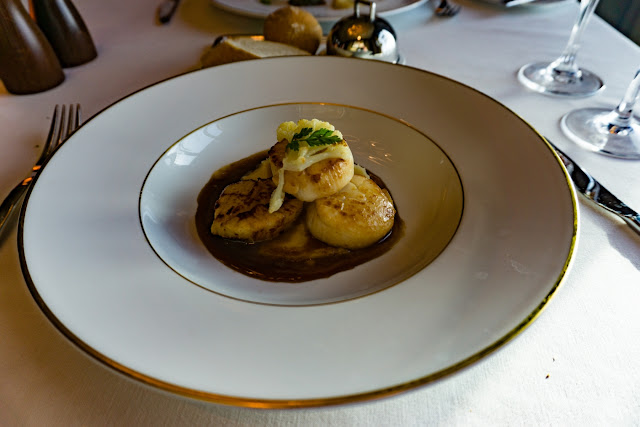 Le Bistro was excellent as usual. A nice window seat. Super service and glorious food - and hurrah - some new choices on the menu.  I don't want to bore people with endless food shots but the scallops were melt in the mouth - the old favourite 4 mushroom soup superb as usual - the seafood medley starter, a dish on its own - the only thing that always slightly disappoints on board is the cheese selection after the meal which seems to be the same no matter which restaurant you dine. After dinner it was straight to our favourite venue on the ship - now redecorated and renamed as 'The Cavern' ( Fat Cats as was) complete with red brick slips -  and our first encounter with The Starlights ( pictured: Nick on bass, Sasha singing, Cornel on guitar and Chester? on drums). A Big thumbs up to these guys: superb entertainment. The Beatles tribute will not be appearing in The Cavern for a couple of days presumably joining the ship later. 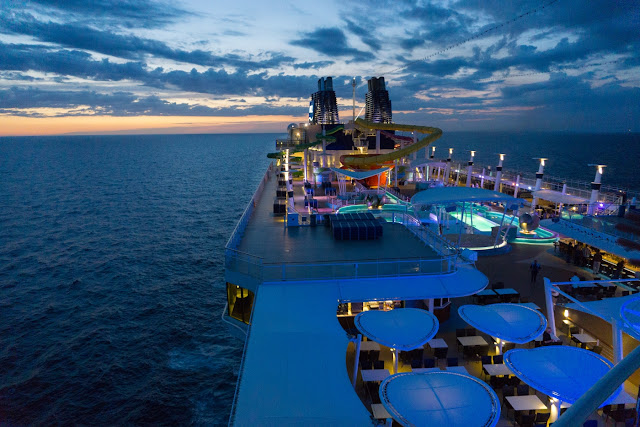 Earlier we had a final walk around the top decks to stretch our legs after dinner and to take in the magic of the open sea. A few clouds are  beginning to roll in. We have a sea day tomorrow and Accuweather tells me we need to push through a front before we get to Sardinia. We retire to our cabin, put the pillow mints in the safe (its a tradition - don't ask) and peruse the newsletter to decide whats happening tomorrow. 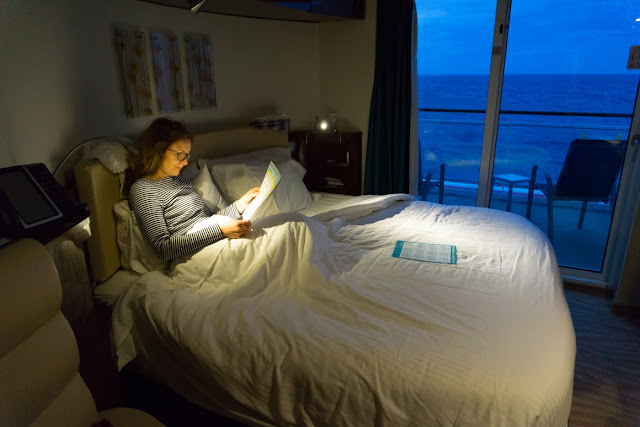 Day 2 - Seaday
Its a little cooler and cloudier today as expected but as long as Accuweather keeps predicting correctly then we should be through this tonight and back in the sun tomorrow. But who cares anyway - we are British and our Kindles are fully charged and ready to go. So after a wake up coffee and pastry in the room and a hearty breakfast in the garden room we do what any other Englishman abroad would do.


Did I mention there's 4000 other guests on-board. It was difficult finding a Sun Lounger as you can see. We also need to attend a roll call meeting this morning to find some fellow Cruise Critic guests. With so little time to plan anything we had decided to play things by ear and do our usual grab a taxi, boat or train in the port to get around rather than the organised tours. However one thing we were unsure about was what to do when we get to Civitavecchia as we both felt we had seen Rome plenty of times and it would be nice to go somewhere else. Luckily CC member Karen had similar ideas and was organising an ideal alternative called "Not going to Rome" 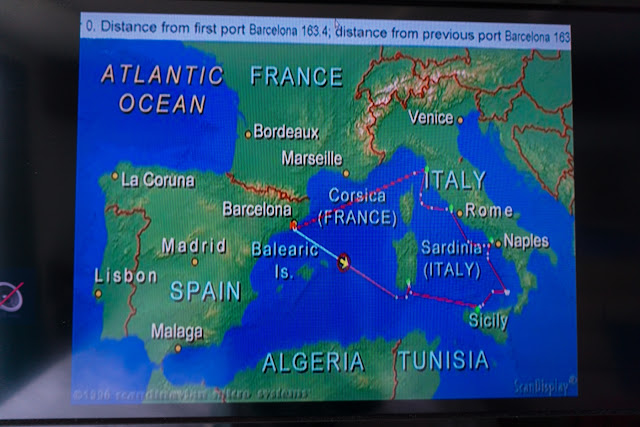 As we progressed towards Sardinia lunch was taken in the garden room again and dinner that evening in the main dining room. Despite reading the daily bulletin we skipped the show in the main theater (I think it was Burn the Floor - which we saw last time we were on the Epic) and went back to the Cavern. Still no Beatles tonight  but Starlights were as fun as always.