A wonderful cloudless morning in NY and we are out nice and early for a walk to and through Central Park. Like Boston, the fall colours are still stunning in Manhattan - vibrant reds and glowing oranges all tucked away in the midst of the concrete jungle. New York is eternally busy as ever so its nice to get into the park where once again marathon runners from yesterday are comparing sores and showing off their medals. 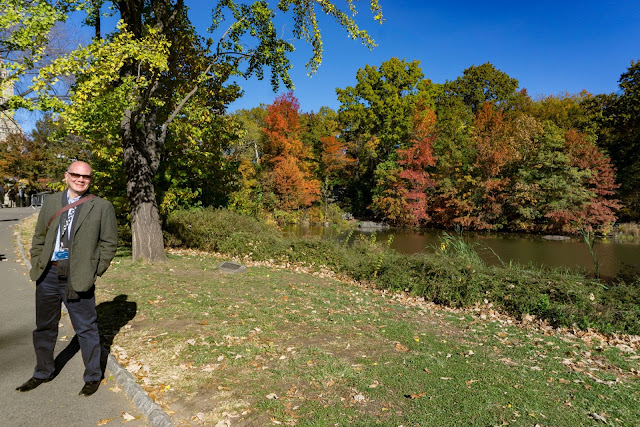 It's a long time since we were last here; I can remember being exhausted and walking hardly any distance at all it was so hot & we were very tired after a full day. Jet lag when flying into New York always seems worse than anywhere else as you don't want to waste a moment when you arrive in such a vibrant capital - so you naturally end up extending the day for ever (apologies to Patrick Stewart for falling asleep in what I'm sure was a fantastic play). Arriving by ship into these cities is just so wonderful -  an unforgettable way of arriving and no jet lag. 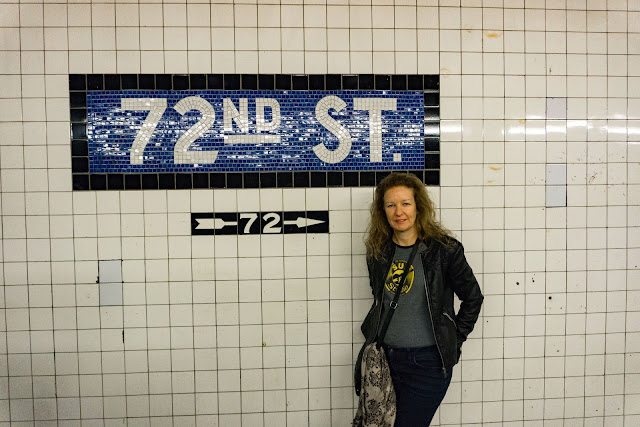 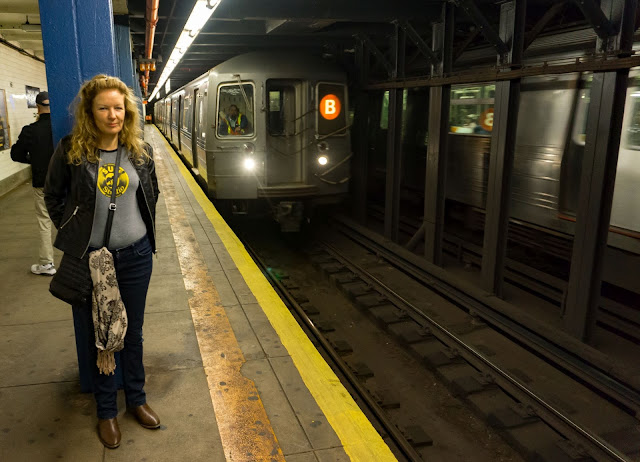 Next we head into the murky depths of the subway, boarding at 72nd St across from Strawberry Fields and ride downtown as far as Fulton Street. From here it is a good spot to appreciate the mix of the old mid rise architecture contrasting with the new high rise skyscrapers. 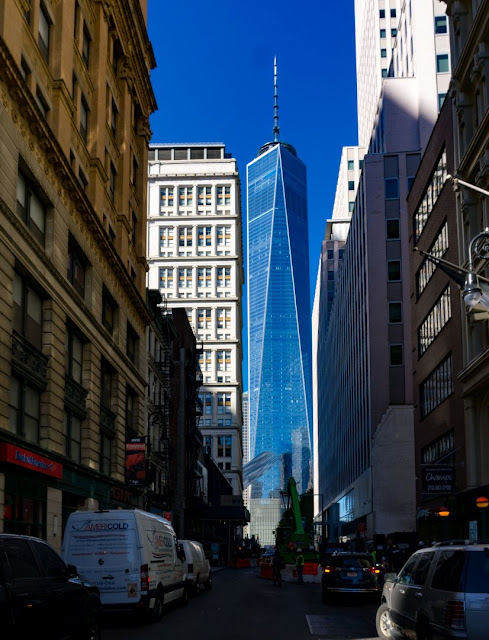 Pop into a Potbelly for a beef flatbread & soup to keep our energy up then head directly east to the newly developed dock areas and views of Brooklyn Bridge from Pier 16. I do like these areas to the east of the financial district, they're doing a good job of retaining the look of old Manhattan. There are some lovely old ships and floating lighthouses in permanent residence here set up as new floating museums. 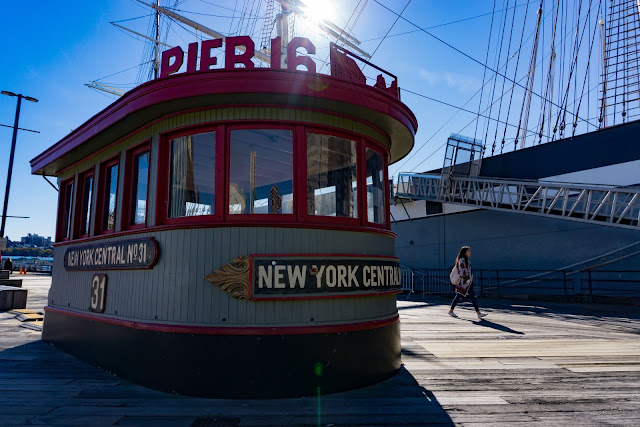 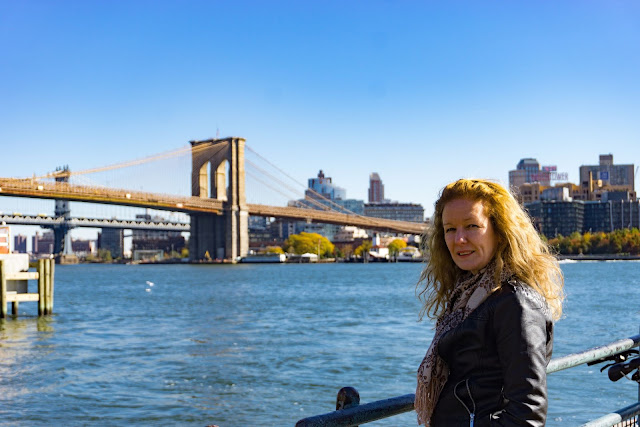 From here we head south through Wall Street and after dragging Jack away from Tiffany & Co. we walk past the Wall St. Stock Exchange and down to Battery Park and Castle Clinton to take in the view of Ellis Island and the Statue of Liberty across the Hudson. We climbed up inside the Statue of Liberty's spiral staircase last time we were here. Very claustrophobic, with two intertwining staircases that take you up or down. 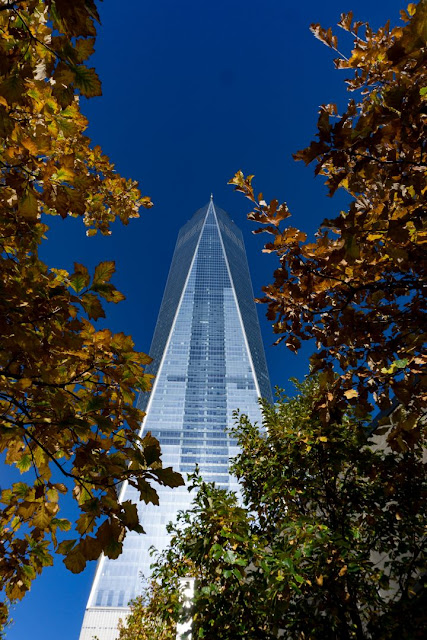 From here its a short walk towards the new 'One World Trade Center' building. There's a great little architectural trick in its design so that when standing at its base it appears to be a giant needle pointing to the heavens. The original Twin Towers are now remembered by reflecting pools on their footprint. 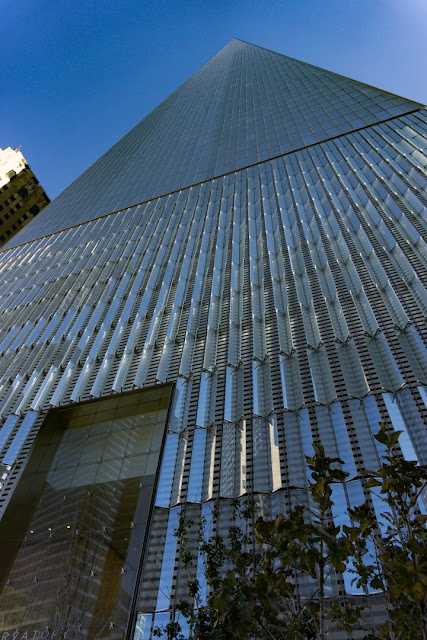 We take another subway (why does one of the richest cities in the world have the grottiest subway) north past Washington Square and into Chelsea and climb up to the new Hi Line Park. This is the old freight train route which was in the style of Chicago's L train system in that its elevated a few storeys  above ground level. 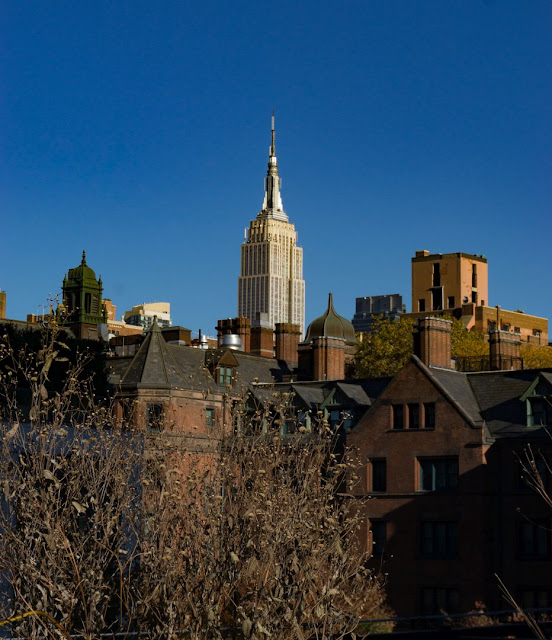 When it was decommissioned somebody had the bright idea of turning it into another green area, its a calm & pleasant stroll in the middle of Manhattan madness; we walk its entire length which brings us back out on the Hudson side of Manhattan. The time has really slipped away and before we know it its 3.30pm and time to be heading back; eager for a shower to remove the grubbiness of the city. New York will always seem like a city with two faces, the richness and power of the buildings contrasting with its dirty and unkempt streets. 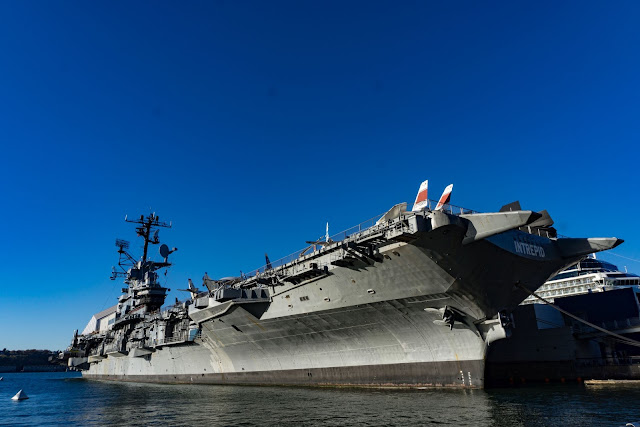 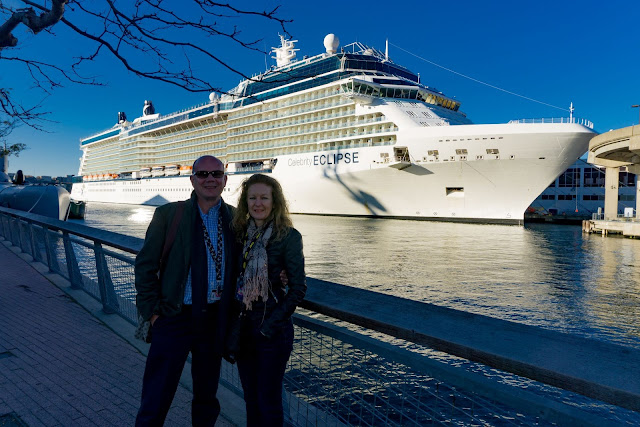 Before we reboard there's just time to take a closer look at the aircraft carrier Intrepid which is berthed on the next pier to us. Now a floating Museum it opened in 1982 at Pier 86 after Zachary Fisher and his brother Larry, prominent New York real estate developers, and philanthropist/journalist Micheal Stern saved her from the breakers yard in 1978. Its a pity that recently they have chosen to put the 'Enterprise'  space shuttle (takes its name from Star Trek yet ironically is the shuttle that never went into space) in a rather ugly hangar on the rear end  as its a carbuncle sticking out of its landing strip. 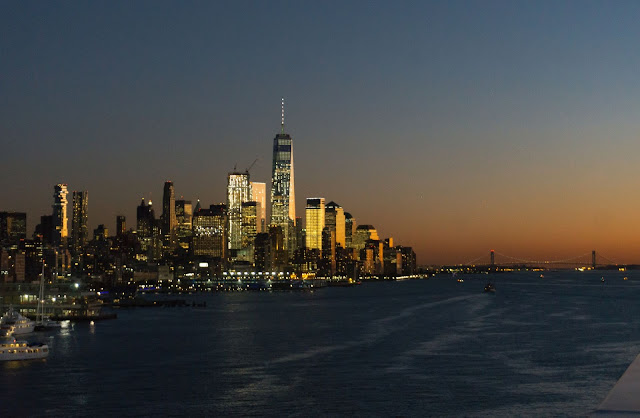 Dusk sail away from New York is even more magical than our arrival; a perfect cloudless golden  sunset bathing the glass city in an orange glow before darkness takes over  and the same buildings are alight in neon. 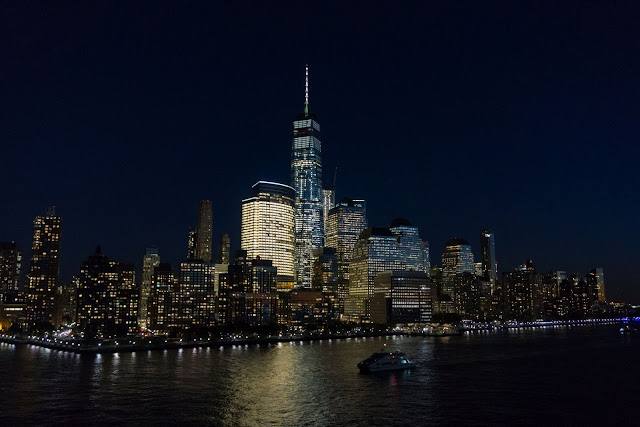 Dinner in the MDR is possibly the best yet with a wonderful ceviche of tuna for Dan followed by a warming tomato and chick pea soup followed by marinated beef flank steak which is perfectly cooked. Jackie has scallops crudo and the baked trout with almonds. All superb.

The show tonight is a tribute to Broadway which is very well done. Just the singers and the big band - no silly costumes and no horrible backing tape. The rendition of Judas' opening song 'Heaven on their minds', from Jesus Christ Superstar is absolutely spot on delivered with as much anger and passion than I have seen on a West End stage - get this lad off the ship and into the west end.