Breakfast in the room again (you never would have guessed!). The swell has died down but the wind is still a  bit wild and a little nippy - pretty much  what I expected the whole journey across the Atlantic to be so I guess we can count ourselves quite lucky that we did get some great weather to start. Quickly up and dressed for the usual morning joggy/walk. 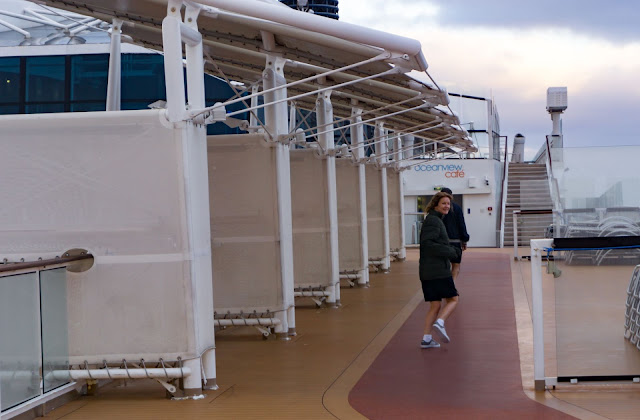 We are now about 200 miles from Boston, the pilot will be coming aboard at 5am tomorrow morning and we should be at the pier for 7am. All the benefits of ESTAS and chipped passports dont seem to have trickled down to the sea ports yet as we have to fill in those old green visa waiver cards and take our ESTAS and passports to the martini bar at 10.10am. A rather curt letter from Border Patrol tells us we should not appear in our dressing gown! You do have to laugh at the language of officialdom that the US often employs - it reads a lot of the time like instructions to either a kindergarten class or perhaps a brain dead zombie. Then again looking at the two presidential choices in a few days maybe thats not to far off the mark.


2pm. There is much excitement on the top deck as we have spotted the first signs of life (other than the greenfinches, starlings and thrushes that have hitched a ride and set up camp on the lawn) since we left Southampton. Just on the port horizon the silhouette of another ship can just be made out. 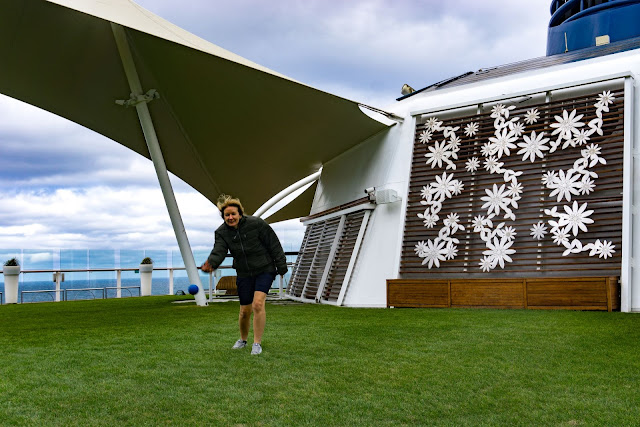 After lunch we brave the lawn garden for a quick game of Boules in an icy gale. The glass blowing team up here have the best job as they have a white hot furness to keep them warm. I have to admit we never watched the glass blowers. Being just old enough to remember the potters wheel on the BBC before the days of moronic 24hr TV - I can't really see the fascination.

Later that evening we return to the stateroom and watch as  the sun slowly sets in the West and the pale orange light gently fades away- there's still no sign of land. 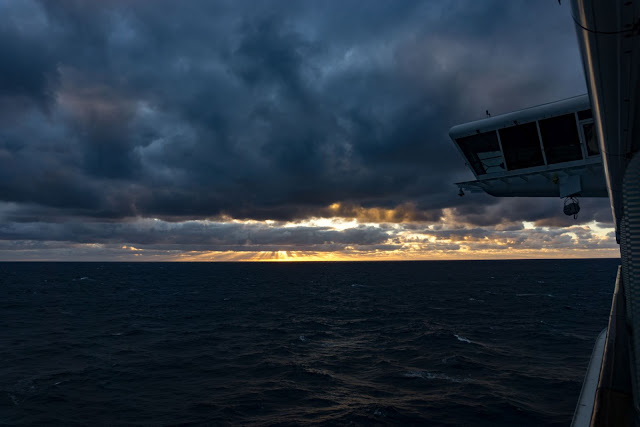 Tonights plan is basically to stay awake after eating in the MDR and perhaps even make it past 10pm. Dinner is a lovely little duck confit, chowder and cod for Dan, the vichyssoise and coq au vin for Jack. 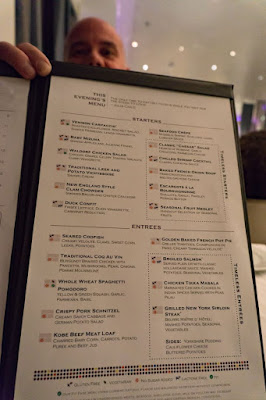 Coffee, more dancing, more promenading and more climbing stairs in high heels for the exercise (that's J not myself in case you are wondering).
The rest of the ship seems to have taken an early night as the captains lounge is pretty much deserted other than a group of three Italian couples who (as usual) show us how classy ballroom dancing can be. Eventually tiredness takes over and on this cool evening we slip slowly into the Gulf of Maine to complete the transatlantic section of the cruise. It's finally Boston tomorrow, the first land since Southampton (which probably explains why everyone has taken an early night) 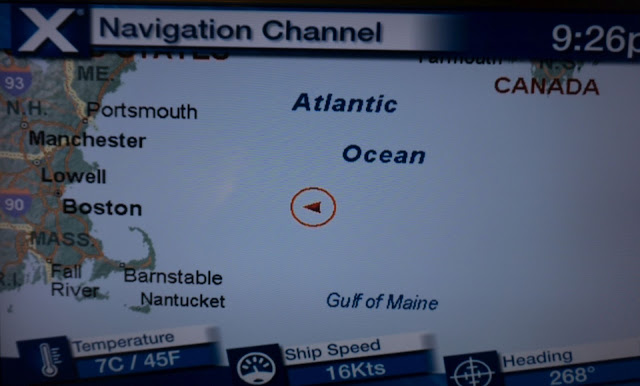