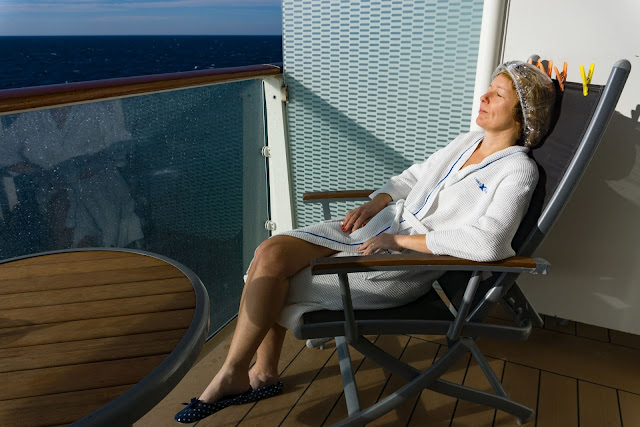 Sailing down the East Coast for 300 miles we should arrive in New York mid afternoon. As you can probably tell, when arriving by ship into Manhattan the most important thing is glamour - and lets face it you don't get any better than a shower cap in the sun - just hoping Gemma wasn't too frightened when she arrived with breakfast. We are up early this morning so to be fair there's still quite a few hours to go before we even enter the Hudson River; its sunny so we climb up  to pass the time on the  top decks. 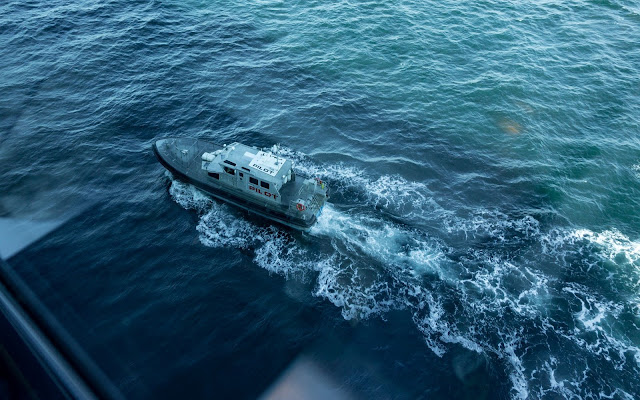 Its another lovely sunny day and we lie out on sunbeds, blankets at the ready should the wind pick up. Its beautifully clear and by l0am in the distant horizon the cityscape of NY city can be seen on the horizon. It's still a long way off though. Around noon the pilot jumps on board; we are due to pass under the Verrazano suspension Bridge at  1:30pm and should be at the pier for 3.30pm. Hopefully the NY Marathon will have finished by then as it started this morning.
There's an unmistakable air of excitement as we get nearer and nearer to the city; guests and staff from Sommeliers to Pool Butlers/Dancers & Waiters all mingle together on the top decks as we look for a glimpse of the great lady. 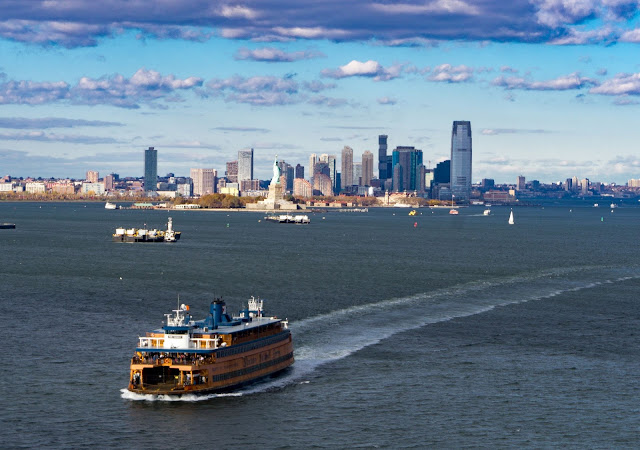 She obliges, gleaming green and gold in the sun as we slowly slide past and enter the Hudson river our horn deafeningly blaring at the orange Statton Island Ferry that glides past us. "They look no different than when I used to ride them years ago" says a lovely American Lady we have been chatting to "They're still as  grubby and rusty as they were then". 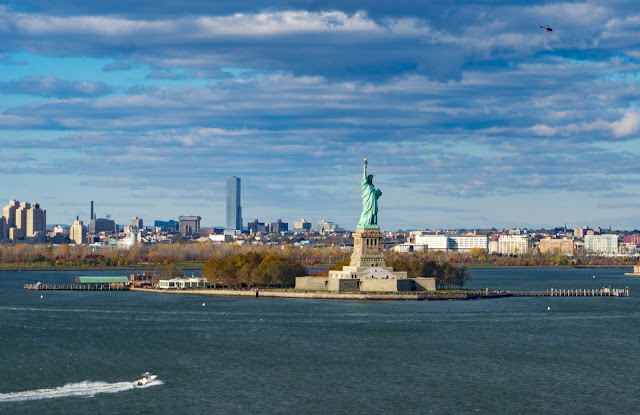 Its exhilarating to arrive into New York this way, especially after having traveled across the Atlantic to make that journey.  As we turn into the Hudson a NY gale hits the top deck but in no way does it diminish the atmosphere - you could throw hailstones and lightning at the ship and nobody would want to miss this moment. 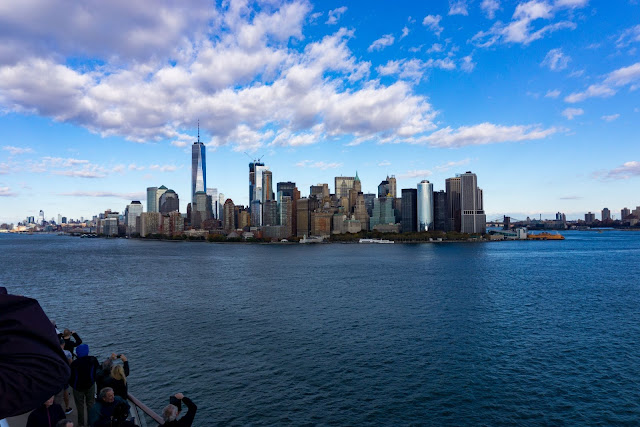 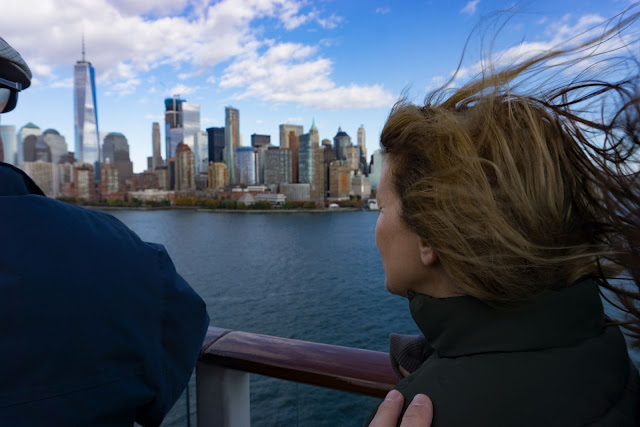 Two tugs come along side gently nudging our sides to help with the tight turns this huge ship will have to make to enter the pier and maneuver around the 90 degree right angle. As we arrive the NCL 'Breakaway' backs out looking like a block of flats at sea - we will be sailing on the identical sister ship 'Getaway' through the Baltic to St Petersburg in a few months - I'm suddenly feeling very spoilt by Celebrity. We dock alongside the USS Intrepid with one of the remaining British Airways Concordes beside. 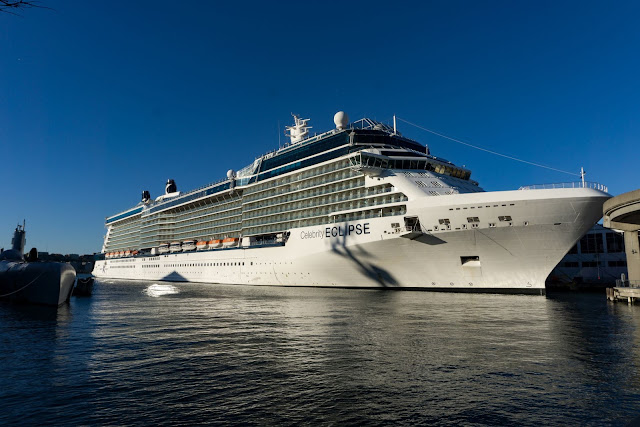 The huge advantage of this port is it's literally a few blocks walk from the ship to Times Square and we soak up the atmosphere in the square and check out whats showing tonight before heading down 5th to get that great view of the Chrysler building (which obliges by lighting up just as we arrive), then we break our necks looking at the Empire State Building before finally taking in the cathedral magnificence of Grand Central station.

All of the barriers have now been removed from this morning's  Marathon, however there are plenty of people parading the streets in the warm wrap cloaks and showing off well earned medals.

We thought we had left all the daily time changes behind us but unfortunately the clocks went back again between Boston and NY not for time zones but because summertime in the US ended; so it's dark pretty quickly and as we leave Grand Central the last of the evening light has completely disappeared. 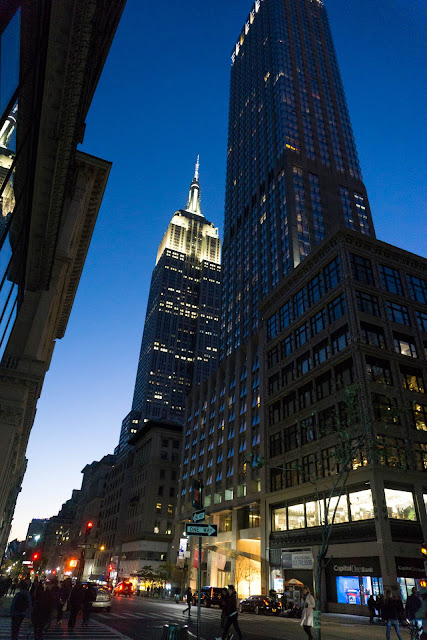 The Eclipse will remain docked here for one night and stay until tomorrow evening. The pier is manned for the entire time so you're free to come and go all day and all night  Chatting to our stewards as we arrive back to change for dinner they are both excited to be heading out into the city tonight as they had not been before.

We swap sides tonight when we enter the MDR just for a change (such rebels). At the table next to us is a Scottish couple who have clearly sat at the same table most of the cruise and have a good relationship with the waiter for this section, who is a young Estonian man & has obviously decided to smarten up his appearance ready for New York. In a lovely Scottish accent that adds a little humour to the situation "Och No...Zoran - what on earth have you done to your hair" - It turns out he handed the cleaner the hair clippers.